Meet the maniacs and moms who bike through the cold in the Inland Northwest. 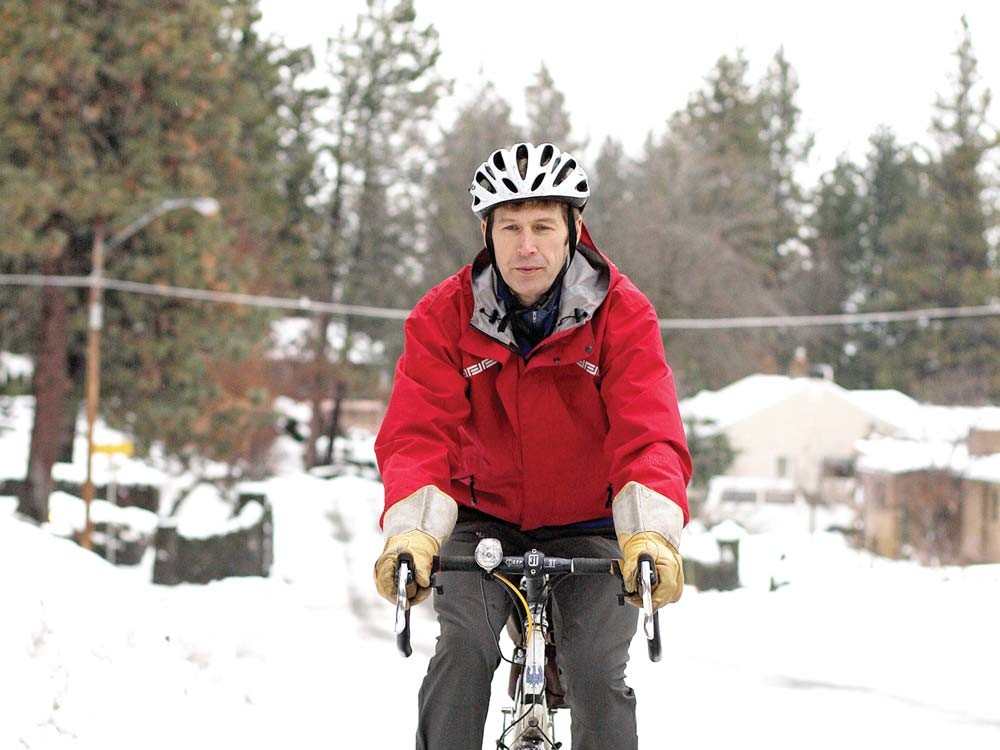 Showshoeing When I Shouldn't Be
Most winter hikes are peaceful, commonplace affairs. Just not this one

Saving the Slopes
If you love your ski resort so much, why don't you buy it?

Bicycle commuters don’t have a death wish. Even the hardcore ones who ride year-round, through sleet and snow — they don’t harbor some secret desire to be plastered to the hood of your car, or to become frozen road kill beneath your tires.

But you might not guess as much, judging from the cultural myths that surround bike commuting. The perception that winter commuters are thrill-happy daredevils — or that all bike commuters are angry, Lycra-clad environmentalists — is a tired caricature.

In fact, there are a lot of reasons that people ride their bikes to work — even in the cruel winter. And bike commuters come in many styles and types.

Here are a few.

Stealthy, swift and undeniably easy-going, the Metaphysicist doesn’t own a car. This type rides for pleasure — defying the norms of everyday transportation. You can spot him by the twinkle in his eyes, the ease with which he rides, his lack of concern over distance and weather.

“Every cyclist on the road is setting an example,” says Ryan Volsen, a 24-year-old bike mechanic at Pedals2People, on East Sprague. “I would prefer to see a diversity of examples put out there. There is no right or wrong way to commute by bicycle, much less in the winter.”

Volsen has commuted solely by bicycle for six years, averaging 20 miles per day. In

the winter, his primary mode of transportation is a 1981 Raleigh Elkhorn mountain bike with fenders and big, knobby tires.

“When commuting, it’s easy to think you need every piece of equipment,” Volsen says. “You feel like you need to spend money on the bike, money on the accessories and money on the clothes, but I think the best thing to do is take what you have. Working on Sprague, I see people with the crappiest bikes every day huffing it around in the worst conditions. Commuting is totally possible. It’s just a commitment.”

This breed of winter commuter has a bike for every occasion. These specialized rides cost more than a lot of people’s cars, and they rip through the ice and snow better than any vehicle on four wheels. The Bike Guru is identifiable by his bicycle tattoos and his mastery of technical lingo.

“I don’t think I’ve ever driven to work in Spokane,” says John Speare, a local blogger who also writes a cycling column for Out There Monthly. “I love it. I wouldn’t do it if I didn’t love it.”

Speare has made the eight-mile round-trip (about 20-35 minutes) to work and back for the last seven years. A bicycle connoisseur, he is a parts junkie and a collector, who rides a different bike for every element. His winter “work horse” is a single-speed Bridgestone MB-2 with studded tires, full fenders (including mud flaps) and generator-powered lights.

“If someone held a gun to my head and said I have to take one, this is the bike I would take,” he says. Speare uses studded tires on two of his winter bikes to maintain traction on ice and compact snow. He uses fatter, knobby tires on two other winter bikes when he needs to cut through or float on top of deep snow.

“I still fall all the time,” Speare says. “I fall not because it’s dangerous, but because I fart around a lot. Winter commuting presents so many different challenges, different conditions to figure out. But it’s all fun. You’re still outside and your heart’s still beating.”

This winter cyclist is equally at home in the conference room and the intersection. For Mr. Business-Casual, commuting is practical and efficient. His bicycle, like his briefcase, is an extension of his being — like an extra arm or a leg. Look for him to be wearing dress slacks and a sweater vest beneath his cycling jacket.

“I’m not going to do anything different than I would normally do just because I ride a bike,” says Bill Bloom.

“I normally dress in slacks and dress shirts. I mean, I own a lot of spandex, but I’m not going to wear it to work.”

Bloom has ridden the four-mile round-trip (about 10-15 minutes) to work for three years. He rides the same Frankenstein bicycle year-round, swapping in studded tires in the winter. He purchased the bicycle for $1.50 at a thrift store and has slowly pieced it together, part by part.

“It was never a nice bike,” Bloom says. “But I’m a fan of purpose-specific bikes, and I just wanted my commuter to be functional. It doesn’t have to be complicated.” Bloom says he has an aversion to falling and uses “risk management” techniques (like leaving early for work) to avoid main arterials and heavy traffic.

“The worst part of winter riding is the cars,” he says. “I don’t really care if I fall. But it’s another thing to fall and have a car slide into you or run you over. As a winter commuter, you have to find that comfort level. Whether it’s a specific route or bike. You just have to feel like you’re in control of the situation.”

This winter warrior rides because it makes her happy. Mary Poppins takes her bike into the grocery store, to work, and into her friends’ houses, because she forgot her lock and no one has the heart to tell this merry nanny “no.” She rides in dresses, baskets and bells.

“Sometimes I sing when I’m riding down hills,” says Deborah Di Bernardo, a classic Mary Poppins. “I treat biking as though it’s just part of my day. I take my bike everywhere. I’ll take it into Nordstrom when I’m riding and I need a pair of nylons. They’re just used to me coming in with my bike.”

Di Bernardo has commuted year-round for eight years. She rides from 31st Avenue to her business, the Roast House on Cleveland Avenue — often with 20 pounds of coffee in her baskets. She doesn’t know the make or model of her bike (it’s gray), but in the winter she uses thick, studded tires to carry her and her cargo.

“My family thinks I have some sort of brain damage for doing this but what do you do? What do you say? It just really works for me. I like the benefits of biking, personally and on a community level. Physically, it’s so much better for us than sitting in a car and mindlessly going. Commuting is satisfying on so many levels.”

Use this new map to plan your bike commute

Snowshoeing When I Shouldn'’t Be