With an eye toward the future of medicine, WSU medical school students explore the world of VR 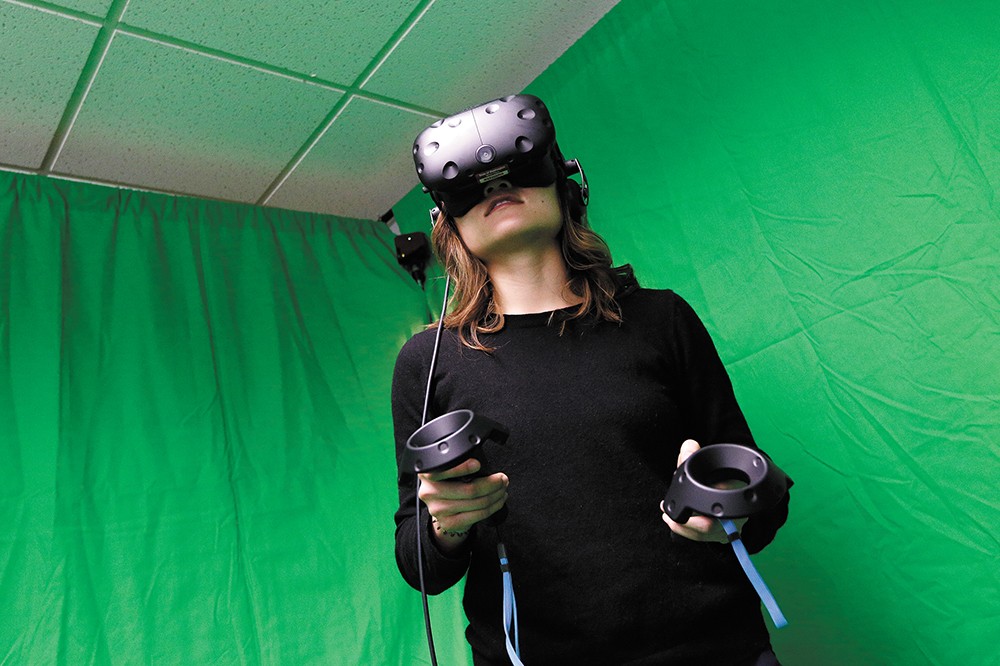 Bryce Cedarquist inspects a human body hovering above him. He's in a room that looks like a generic medical office. The floor is gray, the walls are white, and there's a waiting area for patients that is empty. But as Cedarquist slowly circles the body, it becomes clear that this is no ordinary medical room. In this room, Cedarquist is a god.

With the touch of a button, Cedarquist can make the body move up and down or side to side. He can make it disappear, or he can strip away the skin and the bones. He can pull out the larynx, bring it closer and enlarge it, then return it to the body with no damage done.

This, of course, isn't real life. This is virtual reality. And it could soon change medical education in the United States.

"Virtual reality has a lot of potential in the future and I think a lot of schools are seeing that potential," Cedarquist says.

Right now, medical schools are trying to figure out how virtual reality (VR) and augmented reality — which imposes computer-generated images on to a real-life setting — can be applied to the world of medicine. Cedarquist is part of a student team at Washington State University's College of Medicine exploring how to incorporate VR at the newly founded medical school and what its future might be in health care. The school, in its second year, has purchased four VR sets for students to use as it tries to get ahead of the curve of the new technology.

More established medical schools like University of Washington have VR on their radar. The UW is in an "evaluative stage" as it explores how VR should be used in its medical school, says Darryl Potyk, chief of medical education for the UW School of Medicine-Gonzaga University Regional Health Partnership.

"We think it has a great purpose and a great value going forward," Potyk says. "But we're still trying to figure out how we're going to implement it to the best of our ability and to our students' advantage."

Before medical school, Cedarquist was already familiar with VR. He roomed with three students in college who studied computer science and had a VR set.

"We messed around with it, we did all these party games or we'd go to Ireland and walk around there," he says. "I said, 'Wow, there's huge potential for this in the future.'"

He was one of the first to volunteer when he learned WSU was hoping to bring VR to the medical school. He's looking to go into radiology, a tech-heavy field of medicine, so he jumped at the chance to use the newest technology.

John Tomkowiak, founding dean of WSU's College of Medicine, says he wants students to have a good understanding of VR and augmented reality early on in their medical education.

"We already know there are real world applications for this technology currently being used," he says. "And that is only going to grow." 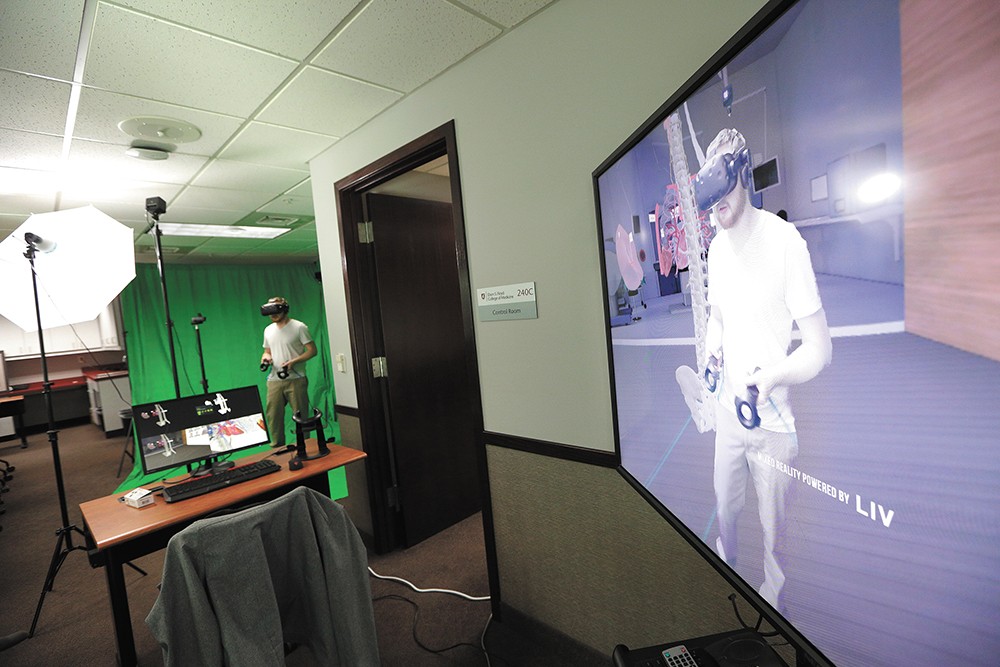 Young Kwak
Bryce Cedarquist says he played around with VR with friends before medical school and saw its potential for the future.

Surgeons can use augmented reality to superimpose a radiographic image on top of a real-life image for pinpoint accuracy during surgery. It's being used to desensitize kids or people with certain phobias to scary procedures like vaccinations or MRIs. Patients who suffer from post traumatic stress disorder can be exposed to situations using virtual reality that helps them deconstruct what's making them stressed.

By having students experiment and get familiar with VR technology, Tomkowiak says, they can better understand its strengths and limitations. That should be an advantage for them in the future, when health care is inevitably more dominated by technology than it is today.

And it's not just in the field of medicine; students need to be able to advise patients who will increasingly be using VR or who'll be otherwise constantly immersed in a digital environment.

"They need to understand what the pros and cons and risks and benefits are," Tomkowiak says. "It's going to be ubiquitous 10 to 20 years from now — or maybe even five years."

Right now, however, the medical field is a bit apprehensive when it comes to VR technology, says Kirk Rowbotham, chief executive for Providence Medical Group locally. It's not used on a day-to-day basis.

"You want to make sure it does what it needs to do and our patients are being served well by it," he says. "To some degree, it's still in the 'show-me' stage. Show me how it can work."

That's not to say local health care systems like Providence aren't open to new technology. Similar to augmented reality, surgeons perform procedures from a room adjacent to the operating room via a computer that enlarges what they're operating on. And Rowbotham adds that there are promising uses for artificial intelligence in medicine.

VR? It might not be ready yet, he says.

"But it feels like it's around the corner," Rowbotham says.

If there's one clear use of virtual or augmented reality in medical school, it's in anatomy and physiology.

Not only can students deconstruct a human body layer by layer to understand how each bodily system works, but certain programs let you actually immerse yourself inside those systems, Osmosis Jones-like. You can actually stand inside of a heart and see the heart muscle contract, the valves open and close. Then you can see the same picture while it's in a disease state. It can work a lot better than some pictures and written descriptions, Tomkowiak says.

"You visualize the entire body from the perspective of being on the inside, you see the relationships between the different components of the body and how they all interact in a way that books have a hard time describing," he says.

Kim Huynh, a student at the WSU's medical school, joined the team looking at uses of VR because she wants technology to be an asset, not a barrier, in medicine. Virtual reality, she says, has already helped her understand information in medical school.

"Everybody talks about how medical school is like a firehose, like you have all this information entering you all the time and you have to digest all of it," she says. "This school in particular has been really supportive in helping with that."

Josh Pahang, another WSU medical school, agrees that VR has already helped him understand anatomy. But he also understands the technology's limitations, too.

"Every patient is going to be different, so you're not always going to have this perfect 3D model," he says. "That's one big limitation."

Each VR set at WSU costs maybe a couple thousand dollars max — not too expensive, but not cheap enough for every student to have, Tomkowiak says.

As the student-led team at WSU explores uses for future students with VR, the UW medical school is exploring several different avenues for using the technology. Anatomy and physiology is one potential use, says Potyk, with UW. He adds that the technology can be helpful for students or doctors to empathize with what patients are going through. For example, they can use VR to see the way a patient would see if they're suffering from macular degeneration, an eye disease.

Right now, however, UW isn't quite ready to dive into VR in medical school.

"We want to make sure that when we make an investment in a particular platform that it's able to do what we want it to do," Potyk says.

Sometime in the coming years, though? That's inevitable.

"There's no question we're going to be incorporating it in some way," Potyk says. ♦

The original print version of this article was headlined "Virtually Imminent"