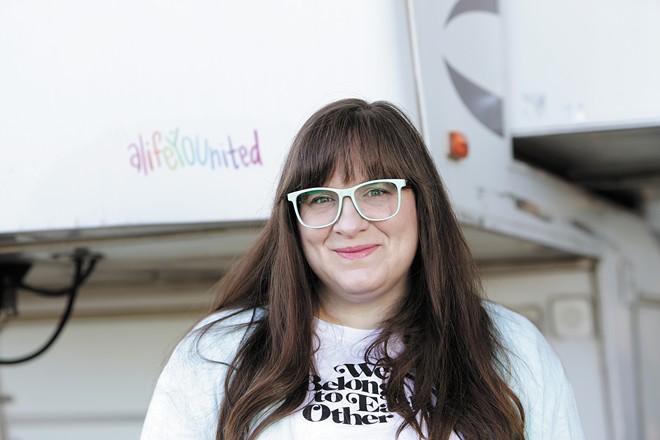 Young Kwak photo
Mary Stover plans to move around the PNW to teach the suicide prevention curriculum she designed.

When she started work on her doctorate in education several years ago, Mary Stover expected she'd be focusing on suicide prevention work for adolescents.

Stover was inspired to help after a friend's 16-year-old son died by suicide, and she learned there were few, if any, suicide prevention resources for youth.

What she didn't expect, however, was what she would soon learn: Researchers had interviewed Pacific Northwest teenagers in the hopes of better understanding when any of them first had thoughts of harming themselves.

Their answers? For some, those thoughts had appeared as young as 9 years old.

"That completely changed my focus," Stover says. "If kids are thinking about suicide at [9], we've got to get to them before they're [9]."

In 2016, Stover (who briefly worked at the Inlander several years ago) started the nonprofit A Life YOUnited, through which she offers support for people who've lost a loved one to suicide. She attends events to hand out resource cards and bracelets so people know where they can find help.

Through her doctoral work, Stover also created a suicide prevention curriculum for elementary students in kindergarten through fifth grade, which she intends to teach through the nonprofit. While the plan is for her to be the first one teaching the courses, she hopes to eventually train mental health professionals in communities around the Pacific Northwest on how to offer her courses for free to schools in their area.

The classes focus on emotional traits intended to teach students how to care for themselves and others, Stover says. The idea is that each grade level focuses on a single concept for one hour per week over a six week time frame. In kindergarten it's kindness, in first grade it's belonging, then on up through the grades the courses focus on resilience, compassion, awareness and responsibility.

While parents may not like the sound of their young children talking about suicide prevention, many of the lessons focus on things like being kind to yourself and giving yourself grace, as well as looking out for others, she says.

"We're talking about building character traits," Stover says. "What does it mean to be kind to yourself? Would it be kind to hurt yourself? Or to tell someone else to hurt themselves?"

The need for suicide prevention courses among young students is evident from statistics and the experiences of behavioral health experts who work with local schools.

Between 1999 and 2019, suicide rates in the U.S. increased by 33 percent, and suicide is the second leading cause of death for those ages 10 to 34, according to the Centers for Disease Control and Prevention.

You can get free and confidential help from a skilled, trained counselor in your area by contacting the National Suicide Prevention Lifeline at 1-800-273-8255 or you can text a crisis counselor 24/7 by texting HOME to the Crisis Text Line at 741741.

Rypien-Peltram's office works with 59 districts in Washington's seven northeastern counties to provide things like behavioral health and suicide prevention training for teachers, particularly in smaller, rural districts. One of the most common questions they get after that training is whether there's a curriculum for kids.

"There definitely is a need for it," Rypien-Peltram says. "There's been a tremendous increase in mental health related [emergency room] visits from our young people. The need has never been as great as it is right now."

Unfortunately, the reality is that some very young kids die this way, she says, emphasizing the need to understand how to intervene in those situations.

"A few years back there was, I believe, a 9-year-old in Spokane Public Schools who died by suicide. Just this past year there was a sixth grader," Rypien-Peltram says. "Whether we want to believe it or not, it's here. We have to have some of the skills to know how to address this."

Stover hopes her courses can change things for the better soon.

For now, Stover is remodeling an RV with family and friends, which she plans to move into full time this month. Once districts invite her to teach, she'll move the trailer to different places around Washington to live in while teaching her six-week curriculum, a move the board of A Life YOUnited agreed was cheaper and more tenable than spending weeks on end in motels.

Eventually, Stover hopes to train up community volunteers to teach the courses throughout the Pacific Northwest and beyond.

The lessons in her curriculum also apply to older kids and adults who may encounter someone going through a tough time.

"I talk a lot about if someone is hurting and they don't want to get help, it's on you to get help because we belong to each other," Stover says. "We're responsible for looking out for each other. I'm telling you right now you'd rather have someone angry with you next week than not be here next week."

One of the myths Stover says she's encountered in her work in "suicidology" is that even talking about suicide with someone may plant that idea in their head.

In reality, Stover says, she encourages people to be direct when speaking with a loved one they're concerned about.

"Be bold and ask questions. Make it awkward. 'Are you telling me that you want to die? That you want to die by suicide?'" Stover says. "We use the word, because there's this myth that if you say it you're making them think about it. That's not true, they're already thinking it. And if you say it, now they're seen."

Many suicide prevention campaigns focus on the idea of bringing the conversation out of the darkness into the light, Stover says.

"It's not as scary when it's out of the darkness, because we can handle it together," Stover says.

In her classes she intends to teach kids that even as little people, it's everyone's responsibility to look out for one another.

"We have a lot of violence in our country," Stover says. "Hopefully this [curriculum] echoes in a way beyond suicide prevention. If we belong to each other, what does that mean?"

Stover hopes to not only open dialogue about suicide, but to also shift the way people talk about it and think about modeling behavior for their children.

"[We] say they died by suicide, we don't say 'committed suicide,' because the language really makes the family of the person who's gone feel like they committed a crime," Stover says. "People don't understand all the time, because it is taboo, and when there's a stigma around something, you don't always learn how to talk about it."

She also says it's common to hear people say things like "that was so selfish" or "what a coward," but she hopes that people realize that sometimes an invisible battle with depression was going on with that person.

"When someone loses a battle with cancer, we have grace for that, they fought really hard. Sometimes you can see it. They get thinner, they lose their hair, they've been in treatment," Stover says. "We can't see depression. ... We have to have as much grace for that loss as someone who's fought a different battle and passed."

In general, mental health is still a topic that many people find hard to talk about.

That's why people like Rypien-Peltram are enthusiastic about the opportunities to get students and families to open up through courses like the ones Stover has designed.

"One of the things that comes up is the question, 'Are we ready for this?' — not just for suicide prevention, but for mental health as a whole," Rypien-Peltram says of discussing new courses to bring into schools. "Especially in a lot of our rural areas where we know that stigma is alive and well still, unfortunately, that's one of the realities we've had to face in this work."

For now, Stover is in something of a holding pattern as she hopes to get into school districts to teach her course for the first time and see what needs adjusting.

"People think I'm crazy for moving into an RV for my nonprofit, but I'm going to give it two years and see if I can get this off the ground and get into schools and make a difference," Stover says.

While the COVID-19 pandemic has in many ways been a curse, she says it's also illuminated the dire need for mental health resources everywhere.

"Nobody's gone untouched by this. We all need help, we all need each other," Stover says. "Many people are hurting because they're alone or felt they didn't have connection during this time. We want to change that, this little tiny nonprofit, with this curriculum." ♦