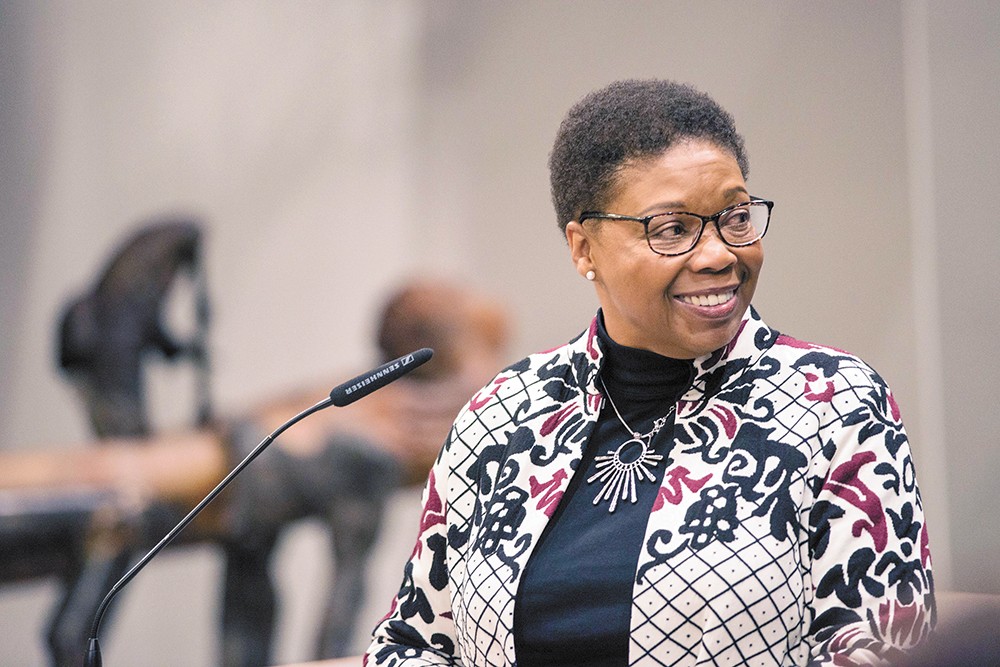 Daniel Walters photo
While Councilwoman Betsy Wilkerson is optimistic, she also expresses frustration with the state of Spokane. "I would have thought we would have been further along in a lot of the issues we're facing. ... There's a lot of talk with no action."

A long time ago, Betsy Wilkerson thought about running for public office — but her mentor changed her mind.

That mentor's name, she says when asked, was Jim West. And he was the mayor of Spokane.

It was a curious pairing — the outed mayor of Spokane, under siege by accusations that he'd misused the power of his office to pursue sex with young men, and a middle-aged black woman, sitting together as buddies at a predominately black church. West had started attending church the Bethel AME in the wake of the scandal, and even though others raised their eyebrows, seeing cynical political calculation, Wilkerson believed he was genuine.

"I think he was looking at something, and he found it at Bethel," Wilkerson says. "He was at church like we all are, trying to save our souls and do good."

When West died from colon cancer surgery complications in 2006, Wilkerson spoke at his memorial service.

"Watching him go through his trials and tribulations was an inspiration to us," Wilkerson said at his funeral, according to a Spokesman-Review account at the time.

Today, 14 years later, Wilkerson finally is in public office, beating out six other finalists to be appointed to the Spokane City Council's District 2 seat that opened when Breean Beggs became council president. And her friendship with West offers a sort of preview of the sort of councilwoman she might be — a leader who reaches across the aisle, even literally, to seek out any perspective.

Ultimately, the City Council vote in support of Wilkerson was unanimous. Even before applications were officially opened up for the position that Beggs was leaving, momentum had been building for Wilkerson.

In December, Sandy Williams, publisher of the Black Lens newspaper, had featured an interview with Wilkerson stressing that she would "add a unique perspective to Spokane's current City Council." Williams sent out emails to every City Council member recommending they appoint Wilkerson.

The two had been friends for years. Wilkerson leads the board of the Carl Maxey Center — a nonprofit aimed at creating a new space for Spokane's African American community — and Williams serves as its executive director.

Wilkerson quickly began racking up support from equity groups like Spokane Community Against Racism and progressive groups like FUSE Washington. And it wasn't just left-leaning organizations.

"I had quite a number of people from the greater business community reaching out and advocating for her," conservative Councilman Michael Cathcart says.

Andrew Biviano, former chair of the Spokane County Democrats and an attorney at a law firm with Beggs, had planned on vying for the spot left open by his co-worker. But when he read about Wilkerson planning on running, he felt it would be foolish to try to compete with her.

"There was a coalescing around Betsy," Biviano told the Inlander last month. "I thought, 'I think I might choose her over me, too.'"

Wilkerson's resume includes numerous volunteer positions across her more than 55 years in Spokane. Besides the Carl Maxey Center, she's been on numerous nonprofit boards including the Innovia Foundation, Spokane Housing Ventures and the United Way of Spokane. In fact, in 2002, Wilkerson says, she was an ambassador for the American Heart Association's "Go Red" campaign with local TV anchor Nadine Woodward.

Wilkerson is a single mom who owns her own business — an assisted-living facility for the mentally delayed — where she notes she's on the "front line" of some of the biggest challenges in the city.

But when it comes to going deep on specific policies, Wilkerson is frank that she really only started to truly perk her ears up and seriously pay attention to city government during last November's election.

When the Spokane Coalition of Color met with her to discuss her candidacy, she says, they peppered her with questions.

"You know, 'What about this?' Social justice. Homelessness, you name it," Wilkerson says. "[On some issues] I said, 'Hey guys, I don't really know,' but I will have to bone up on that."

Wilkerson is OK with saying "I don't know" and readily describes herself as a "blank slate."

"I'm a student," Wilkerson says. "I am in serious learning mode. ... I'm not coming into council with my own agenda."

Indeed, depending on how Wilkerson evolves in office, she may pull the left-leaning council slightly back toward the center. On the one hand, she calls herself a "bleeding heart social worker." On the other, she stresses that she's "fiscally responsible."

While answering questions on her application for her council appointment, she expressed caution about pushing landlord-tenant policy beyond state regulations, arguing that the city "does not have the resources or infrastructure to go beyond the Washington Tenant Act."

Cathcart notes that Wilkerson expressed more support for additional landlord-tenant legislation during last week's in-person interviews with the candidates, but he still came away believing that, while they may disagree on one policy position or another, Wilkerson is a person he can find common ground with.

"She came across as a very moderate, thoughtful individual," Cathcart says. "She isn't going to just support something because it fits something that someone left-of-center would support."

He says that Williams came up to him after one meeting and specifically emphasized Wilkerson's moderation.

"I told him that I am a pretty left-left leaning person," Williams says. But Wilkerson, she says, is "more of a centrist person who is measured. She has that temperament I felt would be very valuable on the City Council."

"I don't think you need someone who's on the outside rattling cages to be on the City Council," Williams says. "You need someone who can get in there and be a mediator and a conduit and a bridge between the community and the government."

So while Councilwoman Kate Burke has been more than willing to vehemently object to the actions of business groups, city staffers and even her council colleagues, Wilkerson, as a black woman, doesn't believe she has the same luxury.

"You know, Kate is bold. It's good, it's her demeanor. But if that was me, I would be labeled," Wilkerson says. "I'd be the 'Angry Black Woman.' ... People would just label me based on something they've seen or something they've heard before they even know me."

Wilkerson will be the first black woman on the Spokane City Council since Roberta Greene stepped down in 2003. That racial identity, Wilkerson believes, is a crucial part of her role as a councilwoman, a way to welcome in minorities who may not feel welcomed by a city government where few people look like them.

On Friday, she walked into City Hall to pick up her ID badge.

"You know what? I didn't see one black person," Wilkerson says. "I can handle that because I've been in that space a lot. But if I was just an average citizen coming in who wanted to go upstairs and engage?"

In the last census, Spokane was 85 percent white — and only 2.2 percent black.

Wilkerson believes the city needs to seek out more diverse voices, by leaving the confines of City Hall and actually going out into the community. Wilkerson says she met with departing Human Resources Director Chris Cavanaugh and suggested a few changes: For example, when it comes time to hire summer employees for Riverfront Park, "why can't we be deliberate and identify youths of color?" Wilkerson says.

"If you want to be a welcoming city, other folks can come here and see something other than white people," she says.

Last week, one of the other candidates who applied for the council slot, Colville Tribe member Randy Ramos, wrote a Facebook post congratulating Wilkerson, but also expressing his deep frustration with the appointment process.

Considering the "track record of Spokane politics," and the climate toward people of indigenous culture, it was "no surprise that we did not get the vote," Ramos wrote, ending with a call for every indigenous person to run for city government.

Wilkerson says she recognizes that sort of frustration and wants to take efforts to represent the indigenous and other minority communities as well. In fact, she specifically wants to meet with Ramos and the five other City Council finalists, because she believes they can have an impact, even if they're not in office.

"That is energy from the 2nd District that needs to be harnessed," Wilkerson says. "These people have stepped up and put themselves out there." ♦