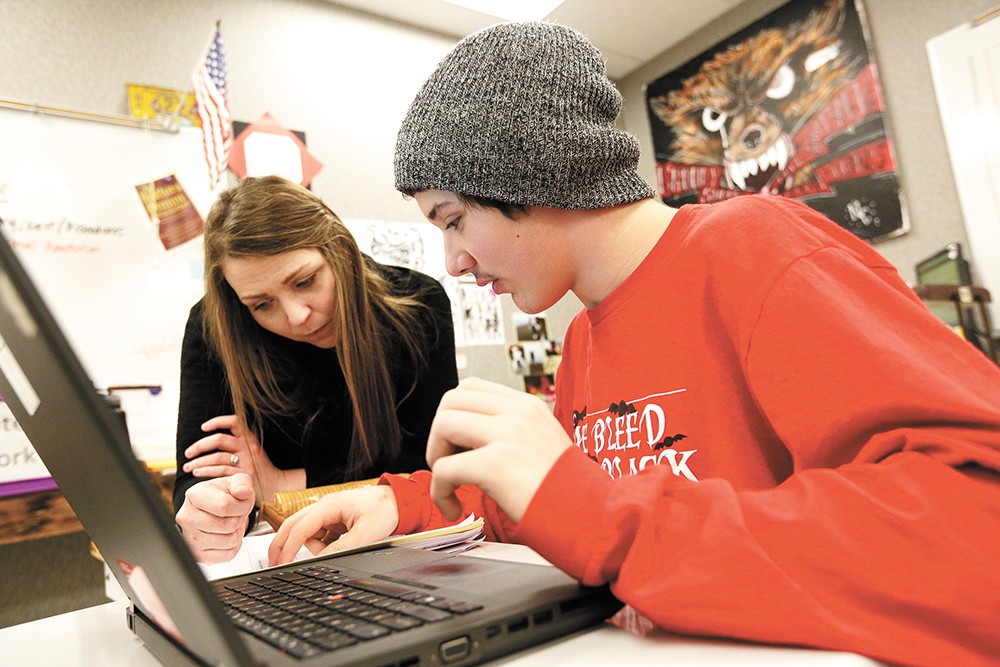 Dominick Tibbets started as a freshman at North Central High School in September with one goal in mind.

"I want to be the first out of my blood-related family to graduate," Tibbets says.

After struggling in middle school, high school represented a fresh start for Tibbets.

Yet just two months into his first semester in high school, he was told he was in danger of failing two classes. And then he learned something else: If he failed just one class, his dream of earning a diploma would be in jeopardy.

"I was stressed out, because high school is a big thing for me," Tibbets says.

Since 2014, Spokane Public Schools has delayed a rule that says high school students must earn 24 credits to graduate, which was set by the Washington State Board of Education. But for the class of 2021, the requirement is now upon them: Current freshmen must take six class periods every single day for all four years of high school.

To earn 24 credits, they must pass every single one.

Already, after just one semester in high school, freshman are failing to do that. Nearly a quarter of high school freshman in Spokane Public Schools failed at least one class, according to data the district provided the Inlander. That's a total of 491 students who are at risk of not earning a diploma after less than five months of high school.

It's left Spokane Public Schools with a difficult decision: Either change the entire school schedule to fit more classes in a year, as other districts across the state have done in response to the 24-credit requirement; or keep the schedule the same, making more of an effort to provide support to students like Dominick before they fail a course. So far, the district has chosen the latter.

Some education officials, however, see the 24-credit requirement as a chance for education reform, an opportunity for high schools to ditch the old schedule and the embedded system it comes with for something better. Scott Seaman, director of high school programs for the Association of Washington High School Principals, urges districts like Spokane to seize it.

"We see this as an opportunity for high schools across the state to reimagine themselves," Seaman says.

As soon as Dominick was told by a North Central counselor that he was failing two classes, and what that could mean, he knew he had to reverse course. The counselor recommended that he take an after-school class, the ninth-grade intervention room.

Spending time there after school on Monday through Thursdays, Dominick was able to get his grades up. This semester, even before he took any test, he went to the homework center after school, knowing it's the best way to stay on track.

This is the strategy that North Central and the other high schools in Spokane have taken in addressing the 24-credit requirement. First, schools use an early-warning system to identify struggling students. Then, they rush to provide opportunities for that student to succeed. There are homework centers, intervention rooms and counselors.

For high school students, research has shown that ninth grade can be a make-or-break year. So schools in Spokane do everything they can to prevent that, says Wendy Bromley, North Central's assistant principal. Even if a student does fail a course, then there are online credit retrieval opportunities, or summer school. They're the very same tools that Spokane used to steadily improve its graduation rate this decade, which is now over 85 percent.

It's partly why, Bromley says, she isn't worried about the 24-credit requirement. Spokane schools already offered these tools. Administrators knew this mandate was coming.

"Our practice has not changed, because we've been prepared for it for so long," Bromley says.

Last year, Jordan says the district created a task force to address the 24-credit requirement. The top priority that came out of it, he says, was providing more money for tutoring and homework centers in high schools. If a large number of students fail? Then the district could look to change the schedule.

"That's been one of the things we've been discussing," Jordan says. "That could be a decision we make."

It could be a seven-period day, either with an extended school day or with less time in each class. Another strategy, he says, is keeping the same basic schedule but adding more courses before or after school.

There are drawbacks, Jordan says. Contracts with staff would need to be renegotiated, possibly a tall task for such a large district. And if a student is struggling with six classes, Jordan wonders, would adding another really help?

It's possible, he says, that students could simply meet the stricter graduation requirements at similar rates to now.

"For some, raising the bar is going to cause some of them to raise with the bar," Jordan says.

TAKING IT 'HEAD ON'

When the 24-credit requirement was passed in 2014, many districts applied for a waiver allowing them to delay its implementation. But Kelso School District, south of Olympia, went a different direction.

"I said, 'I don't want want to apply for a waiver,'" says John Gummel, Kelso High School principal. "Let's take this head on."

At the time, the high school was built on a traditional semester system. By the 2015-16 school year, the school transitioned into a trimester system, with five periods a day, and three trimesters per school year.

"We had to basically rewrite every class we offered here," Gummel says. "It was a lot of work."

A lot of work, sure, but completely worth it, he says. While more curriculum in core classes like math is covered in a shorter period of time, students have more time to devote to it because there are only five classes. If they fail a class, they can take it next trimester. And it opened up new courses that lets students pursue more interests.

If there's a drawback, Gummel says, there are too many options. Typical year-round programs, like music, have a harder time convincing students to take a full year instead of quitting after two trimesters.

Gummel says he is helping Renton School District with a similar transition. In his view, if educators care about kids, reinventing the schedule is the way to go.

"We have to rethink education," Gummel says. "So many people are stuck in what they do."

Seaman, with the Association of Washington High School Principals, understands why there's some reluctance for larger districts like Seattle or Spokane to make a similar switch. It's expensive, and the semester system is deeply embedded.

Seaman says systems should change, not only to accommodate the students who aren't making it, but to make it better for everyone.

"I really believe that this is a chance to change the system for all kids." ♦