Since 2011, Mike Fagan has represented northeast Spokane on the City Council as a reliable conservative, responsive to his constituents. District 1, as it's officially called, spans the industrial area surrounding Spokane Community College, encompassing all of the residential neighborhoods east of Division and north of Interstate 90. The district includes the Hillyard Neighborhood, for instance, which suffers from some of the city's most severe poverty.

But with Fagan currently running to become council president, his seat is up for grabs. And a whopping seven candidates have jumped into the ring to replace him, including an active 911 dispatcher, a student finishing her bachelor's degree and a former legislative aide in the state Senate. (While most identify priorities, few have developed detailed policy platforms.)

With the August primary election just three weeks away, we checked in with the full slate to get a sense of where they stand on hot-button issues in Spokane.

On homelessness, while the seven candidates represent a fairly wide gamut of opinions on the issue, they can largely be filtered in a handful of camps: Those who say they want "accountability" measures built into the city's response to homelessness — such as requiring sobriety for entry to shelters and long-term affordable housing — and candidates who believe that the city has to take a more compassionate view of homelessness that meets people where they are and provides extensive services to help transition them out of poverty.

Michael Cathcart, the current executive director of pro-business advocacy group Better Spokane, embodies the former camp. (He's garnered the endorsements of his former employer the Spokane Home Builders Association and the Spokane Association of Realtors.) He believes that people suffering from mental health issues and drug addiction account for roughly "80 percent" of the local homeless population. Cathcart also argues that both overnight emergency shelters and long-term affordable housing projects should require sobriety as well as commitments from prospective clients that they participate in drug treatment programs.

"The incentive should be that if you want the housing, you get in treatment. It shouldn't be, 'We'll give you a house and eh, we'll talk about other stuff later.' That's ridiculous," he says. "If you just give them a free service without any accountability attached, then you're not helping them and you're not helping us. You're just enabling them to continue doing what they're doing — in this case, drug use."

Cathcart also believes that chronically homeless people who are using drugs in public should be forced into treatment settings. But for those who are repeat offenders, he says he has no sympathy and supports incarceration: "The overall goal here needs to be that we're going to have a zero-tolerance policy on a lot of these issues," he says.

Doug Salter, a 61-year-old school bus driver, somewhat agrees with Cathcart's hard-line position on homeless people who don't seek treatment: "You have two choices: Go to jail or move on. It's got to be that simple. We can't have them on the street anymore."

In contrast, Naghmana Sherazi, a Pakistani immigrant, trained cytogenetic technologist and community organizer with groups like Muslims for Community Action and Support and the Peace and Justice Action League of Spokane, argues that poverty and a lack of affordable housing contribute significantly to homelessness.

She wants the city to work with private and nonprofit developers by using tax incentives to help encourage more affordable housing development. These units would provide stable homes and a source of pride for previously homeless individuals, she adds. (Cathcart and Sherazi did agree that new taxes to pay for housing or services aren't a good solution.)

Numerous progressive organizations have lined up behind her candidacy, such as SEIU 775, the Spokane County Democrats and the Washington Conservation Voters.

Jerrall Haynes, a current member of the Spokane Public Schools Board of Directors and gym owner, also argues that the city needs to find ways to develop more affordable housing through tax incentives — especially housing with wraparound supportive services like drug treatment, mental health services and job training. He also thinks that investments in programs that support kids in school (like the city's free bus pass program for public school students) should be part of the strategy to prevent homelessness in the first place. Haynes, notably, served on the school board when they approved a contract with the teachers union that contributed to this year's widespread layoffs. (He's notched a hefty list of endorsements, including Council President Ben Stuckart, Councilman Breean Beggs, teachers unions like the Washington Education Association and the Spokane Regional Labor Council.)

Krys Brown, a former employee at Union Gospel Mission and current student at Great Northern University who is completing her undergraduate degree in leadership studies, says that the city needs to communicate better with homeless service providers like Union Gospel Mission and Catholic Charities and provide more financial resources to them as needed. 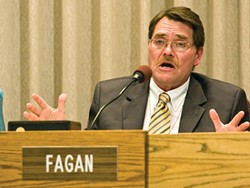 Tim Benn, who co-owns a child care center and runs a conservative talk show radio host alongside Fagan, meanwhile, argues that the city needs to crack down on drug dealers to combat addiction issues among the homeless population.

As Spokane grows, rents are increasing. The county's apartment vacancy rate is razor thin: It was at 2 percent as of fall 2018, according to the University of Washington's Washington Center for Real Estate Research. And most of the candidates in the District 1 race identify this as a major problem — one that directly contributes to homelessness.

Louis Lefebvre, a 29-year-old 911 dispatcher, says that tweaks to zoning and building code regulations are largely what's needed to encourage developers to build more and more diverse housing types within the city.

"A lot of the policies that can be done don't necessarily cost the city a lot of money," he says. "We can try to facilitate more different housing options, be it smaller houses, triplexes, condos." He adds that parking requirements, which generally add costs to new housing projects, are a necessity until public transit infrastructure is adequately built out.

Cathcart's experience with the Spokane Homebuilders Association has left him well-versed in housing policy. He identifies a number of changes he says could be made to let loose private sector developers. He says that city code should be tweaked to make it easier to subdivide lots and build smaller housing units, as well as height limits raised around Riverfront Park to take advantage of real estate well-situated for potential development. Additionally, he says the county's urban growth boundaries should potentially be expanded to accommodate more growth.

"Right now, we make it very tough to build denser housing in areas where we need it and there's a lot of pushback even from the council who typically likes to say they advocate for more housing, they still pushback on a lot of these," Cathcart says. "We can get more housing options for purchase, housing for millennials and seniors, folks who want to downsize, who are just getting into the market."

Haynes says that the city should use zoning code changes and tax incentives to encourage denser development along transit corridors.

Most candidates — including Cathcart — were shy about calling for widespread upzones to accommodate taller and denser housing developments.

Sherazi was direct about her reluctance to go all in on building taller: "It would have to be case by case for the simple reason that we don't have the roads, the infrastructure, the on-off ramps, the bus routes," she says. "Unless we take care of all these things, all we're going to be doing is creating another problem [by adding density]."

The relationship between the Spokane Police Department and its civilian watchdog, the police ombudsman, has been strained of late. Allegations of obstruction and interference abound. As such, some current Spokane City Council members have called for giving the ombudsman increased authority, such as independent investigative powers into incidents of police misconduct.

Some agreed that city code needs to be amended to give the ombudsman more authority.

"The ombudsman should absolutely have all the power to investigate what he needs," Cathcart says, with arguably the most definitive position among the candidates on the issue.

"If [the ombudsman] had true oversight they could also highlight some of the good being done," Lefebvre says. "That could change the image or help facilitate more trust in the department."

But other candidates, like Tim Benn, say they need to learn more about the issue: "I've not been in the briefing rooms for that issue so I would need more information."

Similarly, Haynes says that while he generally supports anything that improves the "transparency of any publicly funded entity," he needs to read up more on the ombudsman ordinance before weighing in on any specific changes. ♦

CORRECTION: A previous version of this article incorrectly stated that Doug Salter is no longer a bus driver. He currently works for the West Valley School District as a bus driver.

The original print version of this article was headlined "Musical Chairs"