One of them is old school and the other is new, but together on the court they've proven to be a perfect combination.

Jalen Suggs, a freshman phenom choosing to spend his required season between high school and the NBA here in Spokane, is the new. He's a one-and-done talent generating buzz as a potential No. 1 draft pick. Corey Kispert represents the old school. A player whose development over four seasons as a Zag has transformed him from role player into an all-America performer and potential Top 10 pick.

Teams like Duke and Kentucky, the traditional powerhouses of the sport, load up year after year on the elite freshman talents like Suggs. Successful mid-majors, a group that once upon a time included Gonzaga, tend to follow the developmental route. They operate as college teams always have, with players who stay for four years, improving their game with each passing season.

Gonzaga's successful balancing act between those two approaches has the undefeated Zags sitting atop the college basketball world.

"A lot of guys who are at his talent level come into a college program and expect things to be handed to them," Kispert says of Suggs. "There's this big culture shock when the older guys are pushing back against you and things aren't quite easy as they used to be. Every person goes through that sort of phase.

"The thing with Jalen is that when we went at him and put the pressure on him, he responded, he fought back, and he knew from day one he had to earn everything that came his way."

Suggs is the highest-rated recruit in Gonzaga history, having been ranked by ESPN as the sixth best prospect in the class of 2020. As a high school senior, he won Minnesota's Mr. Basketball award as the state's best boys basketball player. The Zags' competition on the recruiting trail included teams like Baylor and Iowa, both of which have spent this season in the top five of the AP Poll, and Ohio State. Not the Ohio State basketball team, though. The Buckeyes, who just last week played in college football's national championship game, offered Suggs a scholarship to play on the gridiron. He wasn't just Mr. Basketball in Minnesota — he won Mr. Football as well.

That background led to a team-building exercise that pitted Suggs against another former high school quarterback now playing basketball at Gonzaga.

"It was a Friday night in the summer, and we were all sitting around bored. Joel [Ayayi] suggested we go play football," Kispert says. "We played some seven on seven until it was too dark to see. It got really intense. It was super, super fun, and it was a good ice breaker for the new guys on the team."

In postgame interviews and on Twitter, the two have enjoyed hinting at their battle without necessarily giving away too much about the result.

"Me and Corey were obviously the two quarterbacks," Suggs says. "He showed me a lot of good things. I think that QB1 battle was definitely a close one. Corey's a great guy, a great teammate. I love being around him; I love learning from him."

On court and off, there's no better teacher on this Gonzaga roster than Kispert. Aside from Aaron Cook, who transferred from Southern Illinois, Kispert is the team's lone senior. That alone puts him in a leadership role, but it's his background that makes him the perfect guy to lead by example.

When he arrived at Gonzaga in fall 2017, the Zags were coming off a trip to the national championship game. The program was operating at as high a level as it ever had. But Kispert wasn't a newfangled, fancy recruit. He fit the traditional Gonzaga mold. An in-state kid from the west side good enough to start from day one but who spent most of his freshman year coming off the bench as a role player. Every season that followed saw Kispert's game take a step forward.

"Every summer since I've been here I've picked one thing, two things, that I really hone in on and work hard at," Kispert says. "Last summer it was defense and ball handling. This year I wanted to shoot close to 50 percent from three and be more versatile in my scoring."

While working on his offensive game, Kispert was also considering his future. He was projected to be a late second round pick in last year's NBA draft, but he ultimately chose to return for his senior season. It was an opportunity to bet on himself and improve his draft stock.

"I knew I was either going to play in the NBA or come back for my senior season, so I knew I had to make a jump no matter what I decided to do," Kispert says. "That was the rhetoric after I decided to come back here. Every game I get a chance to prove that the bet came out in my favor. I'm really relishing every single game that I get to play."

This season Kispert is the team's leading scorer (20.9 points per game) and has achieved his goal of shooting close to 50 percent from three. He's surpassed 1,000 points scored for his career and climbed into the top 10 in Gonzaga history in three-pointers made and games won. On the most talented roster Gonzaga's ever assembled, Kispert is arguably the best player and without question the team's leader.

That's business as usual, though. The Zags almost always have at least one senior starter who has spent his entire career at Gonzaga. Last year it was Killian Tillie, and before him guys like Przemek Karnowski, Kevin Pangos, Robert Sacre and Jeremy Pargo held that position. This year, it's Kispert. The last time the team didn't have a guy who fit that criteria was 2006, when a mustachioed junior named Adam Morrison took college basketball by storm.

Somehow though, this season feels different than all those that came before it. 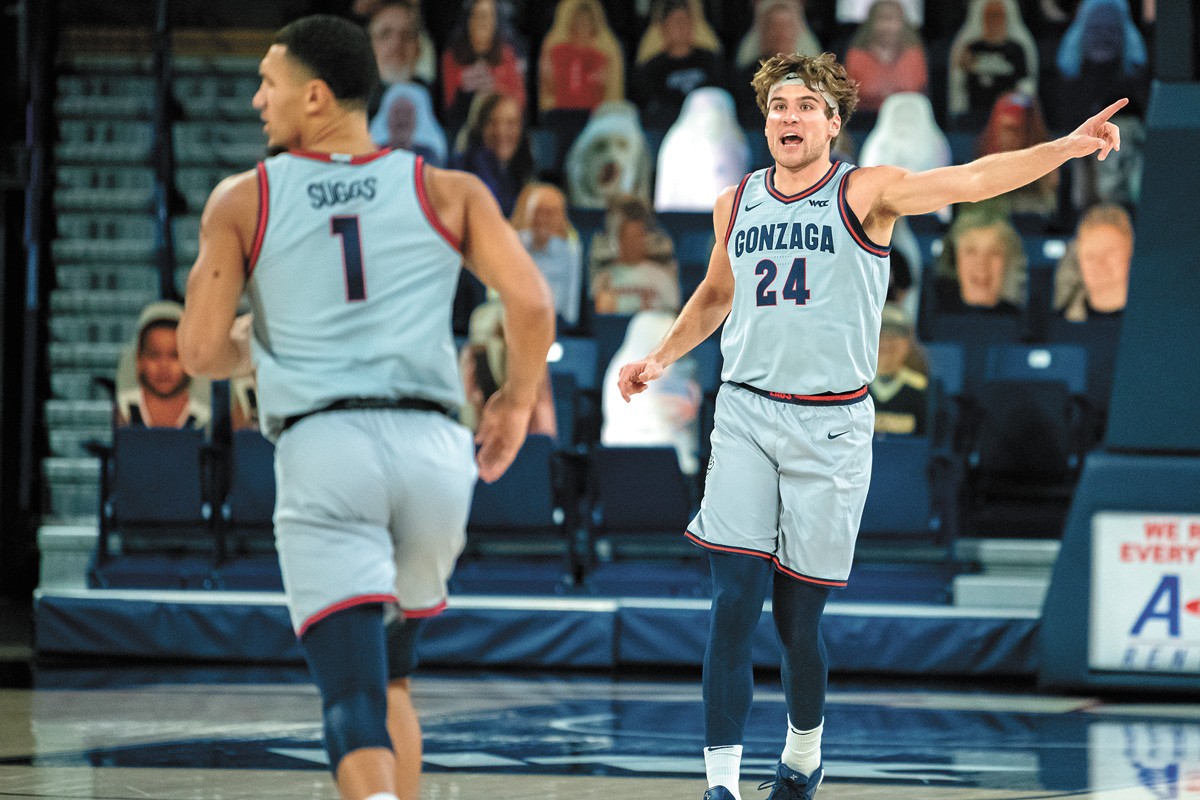 "That's the great thing about this program — enough is never good enough," Kispert says. "A Final Four isn't good enough. All the years we've made the tournament isn't enough. We're always pushing for more, and we're not satisfied with where we're at. I think that's what made the continued success and the Cinderella story that is Gonzaga so great."

The Zags have had a senior leader for what feels like forever now. They've had talented rosters for 20-plus years. They've had a handful of players who were talented enough to leave early for the NBA, too. This year though, they have all of that at the same time. And the pieces comprising Gonzaga's puzzle are better than normal.

Suggs would be playing in the NBA this season if the league's rules allowed for players to do so straight out of high school. He made that very clear just 30 seconds into his first collegiate game by slamming down an alley-oop dunk against then No. 6-ranked Kansas and has shown it all season long with an ever-growing list of jaw-dropping passes. He's a pro in a college uniform.

Even after he committed to Gonzaga last January, in a ceremony aired live on ESPN2, there was a real possibility he could be lured overseas by a lucrative one-year professional contract. Instead of taking the money, he stayed true to his word and came to Gonzaga. Every year a handful of elite recruits choose to play overseas or in the NBA's developmental league, which allows players who are coming straight out of high school. A ton more choose to leave college early to play for a paycheck. Gonzaga's got two who did the opposite.

Much like Kispert's bet on himself this past offseason, Suggs' decision to come to Gonzaga has paid off.

Despite taking incredibly different paths to get here, these two players have become among the biggest names in all of college basketball. There's a very good chance they'll both have their names listed among the first 10 picks in the next NBA draft.

Until then, though, this one-and-done freshman and fourth-year senior will continue to help push Gonzaga to new heights. ♦

The original print version of this article was headlined "Dynamic Duo"