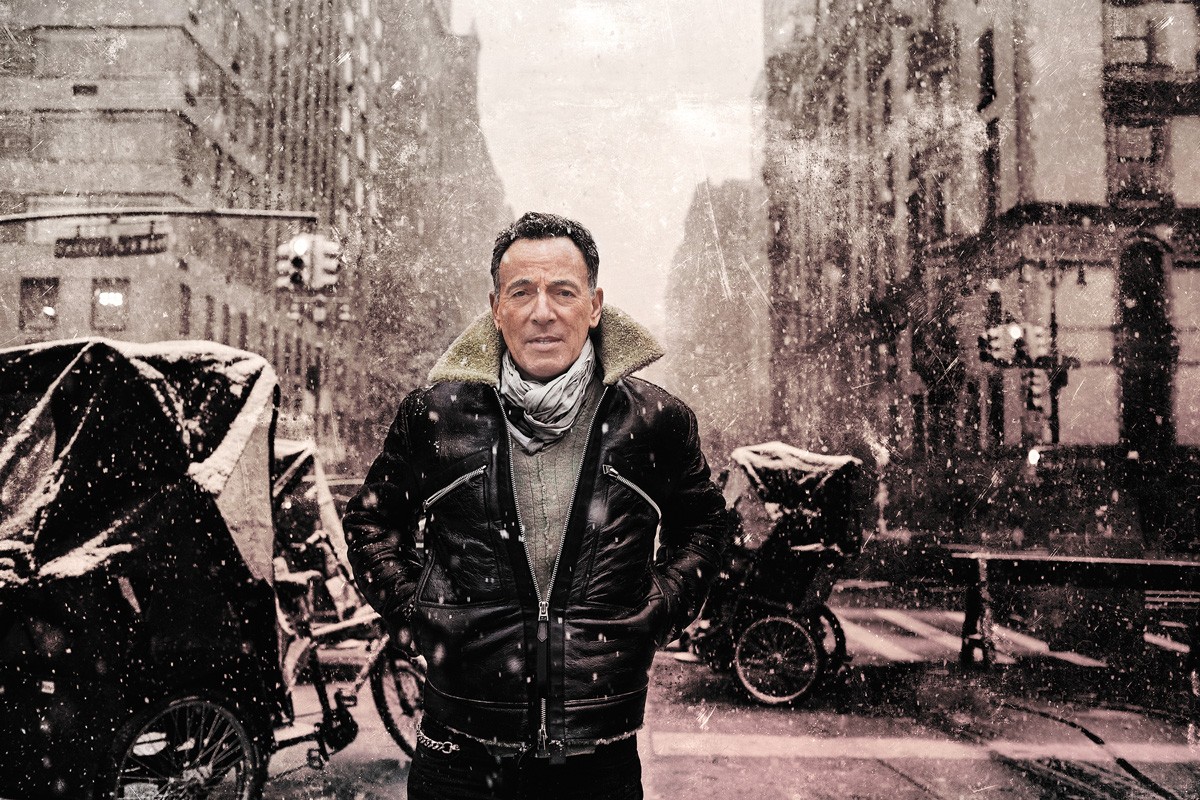 Danny Clinch photo
The Boss has a new album, Letter To You, and we have a list of his best studio work for you, too.

Before he was 30, Bruce Springsteen had already been crowned the poet laureate of working-class America. His blue-collar background in New Jersey manifested itself in deeply humanistic portraits of broken families, oppressed factory workers, teenage hoodlums, star-crossed lovers and lost souls who wanted to jump behind the wheels of their Cadillacs and break free from small-town tedium. He's the great short story writer of American rock, but he's also a master of the rousing arena anthem and a student of Phil Spector's pop symphonies.

Springsteen just dropped his 20th studio album, Letter to You, recorded in a matter of days with his E Street Band and featuring songs that have been kicking around since the earliest days of their careers. The album reads like a Springsteen user's manual: It runs through all his favorite images (dive bars, VFW halls, dusty country roads, fading pictures in a scrapbook) and revisits the themes (aging, unemployment, romantic regret, hypocritical authority figures) that echo throughout his work, all while the E Street Band clicks perfectly into place behind him.

On the occasion of this new release, we're looking back at the Boss' legacy and picking the 10 best albums of his career up until now. This is, of course, totally subjective — every superfan has their own personal favorite Bruce record, and my tastes skew toward his older stuff — but these are the ones I come back to most regularly. You, no doubt, have your own list.

10. Magic (2007)
You can start to hear Bruce repeating himself thematically and melodically here (to be fair, he was 15 records in), but it's impossible to deny the electric musicianship that drives the aptly named Magic. That's unusual, considering the band's individual parts were recorded in piecemeal fashion, but it nonetheless sounds like the work of a group half its age.

9. The Ghost of Tom Joad (1995)
An underrated title in Springsteen's discography, and I'll admit that I shortchanged it for years. Its spare folk-country ballads make it a spiritual cousin to 1982's Nebraska, and like that landmark album, the brutality of the American heartland, haunted by images of John Steinbeck's Dust Bowl itinerants, is beautifully communicated through Springsteen's weather-beaten vocals.

8. Western Stars (2019)
The cover art resembles the kind of painting you might see hanging in a desert motel room, and Springsteen's songs here are similarly worn, familiar and contain occasional strokes of genius. In a way, he's deconstructing the mythic iconography of the American Western, with his cast of aging movie stars and broken-down rodeo riders, and that thematic throughline inspired his strongest collection of songs in years.

7. The Wild, the Innocent and the E Street Shuffle (1973)
Bruce's sophomore album, released the same year as his debut Greetings from Asbury Park, N.J., is where he truly establishes his template for lush, multipart epics, filled with sharply drawn characters and novelistic details. It's perhaps a tad overindulgent, but all these years later, it's thrilling to hear a legend planting the flag of his signature style before he was a legend.

6. The Rising (2002)
Bruce hadn't gone anywhere, and yet The Rising somehow feels like a triumphant return, and one of the first pieces of popular art to grapple with the Sept. 11 attacks (recording started about four months after, in January 2002). Springsteen examines the tragedy inwardly and outwardly, from both micro and macro levels, through some of his finest midperiod songs, especially the instant classic title tune.

5. Nebraska (1982)
Springsteen's lonely characters were never lonelier than in the murder ballads of Nebraska, and the starkness of his midwestern tableaux is reflected in its sound: Springsteen recorded the whole thing by himself on a four-track recorder, and though he intended to take the rough drafts to his full band later, he decided he liked it as is. Written during a depressive episode, the album's worldview is mostly violent and hopeless, and yet achingly beautiful all the same.

4. Darkness on the Edge of Town (1978)
Although it's not a concept album, the evocative title of Springsteen's fourth record manages to conjure a plotline in our heads, one that blends blue-collar malaise with shadowy, noirish intrigue. Here we see Springsteen, at this point in his career a burgeoning superstar, shifting gears between all his signature modes — the sweeping romanticism of "Prove It All Night," the quotidian drudgery of "Factory," the heedless optimism of "Badlands" — and doing it brilliantly.

3. The River (1980)
Springsteen's follow-up to Darkness is far more ambitious and far less disciplined, running an unwieldy 83 minutes and 20 tracks. But it's a pretty damn consistent set of tracks, which includes early rock 'n' roll riffs ("Sherry Darling," "Cadillac Ranch"), Wall of Sound-esque pop gems ("Hungry Heart," "Out in the Street") and forlorn ballads ("Wreck on the Highway," "Drive All Night"). It's like a catalog of Springsteen's early influences in one thrilling two-disc package.

2. Born to Run (1975)
The moment when the Boss became the Boss, and the album most often cited as Springsteen's crowning artistic statement. What's so remarkable about Born to Run is that it was just Springsteen's third record, released when he was only 25, and from the exhilarating opener "Thunder Road," which begins at a purr before revving up and speeding off, to the final moments of the urban epic "Jungleland," it's a remarkably confident work. Recording sessions stretched out over 14 months and were reportedly fraught: Springsteen not only struggled to accurately capture his desired production style onto tape but his relationship with longtime friend and manager Mike Appel was starting to fracture. You wouldn't know it from the sparkling musicianship, though, which spilled over into a now-legendary tour that cemented the E Street Band as one of the great live institutions of American rock.

1. Born in the U.S.A. (1984)
Springsteen's best selling record is an assemblage of leftovers and spare parts that had been recorded over the course of two years, so it's a wonder that the disparate pieces of Born in the U.S.A. cohered at all. Maybe that unusual method of curation explains why it's arguably his strongest collection of songs, seven of which were released as singles and all of which cracked the Billboard Top 10. Although Springsteen's consideration of working-class America was always fiercely political, he was perhaps never more polemical than on this title track, a blistering anti-war ballad that was transformed somewhat ironically into a towering arena-rock powerhouse. That cognitive dissonance led to it being embraced at the time as an alternate national anthem, and it was even name-dropped by then-President Reagan as an example of the country's re-emerging patriotism. It remains the most misunderstood song in the modern rock canon, though the rest of the album's all-killer, no-filler track list is much easier to understand and yet just as terrific: the rockabilly rave-up "Working on the Highway," the synth-drenched high school reunion of "Glory Days," the lustful longing of "I'm on Fire," and the irresistible "Dancing in the Dark," written on deadline and specifically engineered to be a hit (it was). True to its name, this is an American masterpiece. ♦

The original print version of this article was headlined "Boss Tracks"

A case for the value of year-end lists