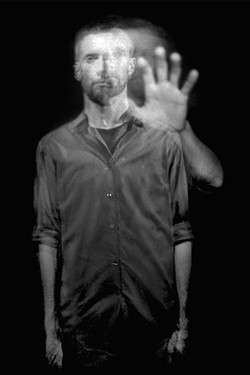 At first, the train tracks behind a Hillyard bar simply drew her artistic eye. But then, as she was setting up her shot, Grace June knew she should make this a self-portrait. Just as impulsively, she also decided she needed to be nude.

The photo of her on the tracks became the first in a series of self-portraits that are now a cathartic form of therapy for her. They're a physical representation of things she's dealt with and survived, including bipolar disorder, sexual assault and repeated suicidal thoughts.

"Sometimes it's just fun. It's kind of an adrenaline rush to be nude, looking both ways for cars and trying to take that photo as quickly as possible so you don't get arrested," June says. "But it's more. The spirit of it is to see something that makes me feel better, that's a release of negative energy."

With each photo, she's found healing. But whenever she's presented the pictures in shows, people have inevitably shared their own traumas, leaving June to wonder if she could somehow help others in the same way.

"You give people permission to talk when you share your truth," she says.

That's when she got the idea for a photo project she's calling the Survive Series, depicting people who lost someone to suicide and people who themselves tried to die by suicide.

"Since people unilaterally related to the mental health issues I discuss in my self-portraits," June says, "I thought [the subject of] suicide was the next logical step to help as many people as possible."

In many ways, she says, the project came together organically. There wasn't some large announcement asking for willing subjects. Unfortunately, with how many lives have been touched by suicide, she didn't have to look too far to find the people featured across 23 photo sessions, many of whom are connected to the art community.

The portraits are in some cases haunting, lit with a simple, single light, a slow shutter catching arms and bodies in motion, bringing grief and emotional struggle to life in the still images.

Before she took their pictures, each person or family met with June to talk about their story, how they lost a loved one, or how they struggled themselves.

"Honestly I think people want to be heard and want to be understood," June says. "Maybe there isn't a ton of stuff we can all do for each other, but the one thing we can do is listen and be present. That's something everyone can do."

Each participant also wrote their own words to accompany the portraits, both in a book that June plans to debut at the Survive Series Art Show Oct. 12, and in the exhibit itself. Many of them will be at the show, which will also include poetry and music performances, and offer guests the chance to share their thoughts and reflect in a video booth.

The participants in the photo series will each get a copy of the book, which is being printed with help from the Spokane Arts Grant Awards, and June hopes to get copies to local school libraries and counselors so more people can see the exhibit and hear what the survivors have to say.