Using a patient's own heart as the pump, BioLung would exchange oxygen from the air with carbon dioxide from the blood 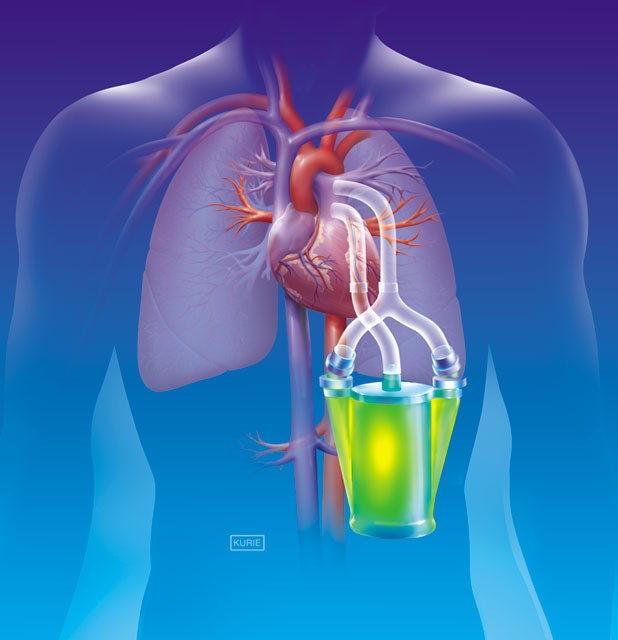 One day, perhaps doctors will simply toss out your old, broken-down organs and exchange them with plastic pipes and pumps that do the same job. Already, there’s a mechanical heart. Soon, say researchers, the world may see artificial lungs.

Right now, when lungs fail, patients are left with few options and often end up on a transplant waiting list, where hundreds die annually before they ever get one.

That all may soon change, say researchers who believe they’re on the cusp of developing artificial lungs that would, at least temporarily, do the job of natural lungs. The devices wouldn’t be a permanent fix, but they could buy patients a few more weeks or months of life and keep them strong enough for transplant surgery, says Scott Merz, a biomedical engineer. Merz co-founded MC3, a Michigan-based company that is developing an artificial lung system called BioLung. They’re not the only ones: Engineers around the country, including some at the University of Pittsburgh, are working on similar designs.

“One thing to realize is that the basic technology has been around for years and is used temporarily during bypass surgery,” Merz says. “What we’re trying to do is to use these devices for the long term [for weeks or months] and in order to do that, we’ve had to develop durable materials and devices that don’t clot blood.”

The BioLung, attached externally, is about the size of a soda can and has two tubes: one is attached to the pulmonary artery and the other connects to a patient’s left atrium. It has no moving parts and instead uses a patient’s heart to pump blood in the BioLung’s chamber, where oxygen and carbon dioxide are exchanged across a plastic membrane. The oxygen-rich blood then returns to the body.

The device has been used successfully in tests with sheep, resulting in better survival rates and less lung injury than a conventional ventilator. BioLung has not been used on people yet, but a similar MC3-developed device for short-term help, Novalung, has been used with thousands of patients in Canada and Europe, including some American soldiers receiving care in Germany, says Merz.

“It’s an exciting time,” he adds. “There’s still questions on how large this market will be or how widely applicable the artificial lungs will be, but we’re seeing a real difference.”

Currently, the patients with lung failure are hooked up to a mechanical ventilator, which has been associated with lung damage and infection, Merz says. Annually, an estimated 150,000 Americans experience lung failure each year, according to the National Heart, Lung, and Blood Institute. About a third die, and those who survive often suffer permanent respiratory problems. More than 2,000 people are currently waiting for a lung transplant.

Meanwhile, those in the medical community seem enthusiastic about the latest developments, but aren’t exactly holding their breath. It’s not clear when any of these devices will finish clinical trials, get FDA approval and finally hit the market. “The engineering problems are monumental,” says Dr. Norman Edelman, chief medical officer for the American Lung Association. “It’s much harder than an artificial heart because you need a very, very large surface area to exchange enough oxygen … There are some pretty smart engineers out there and I’m hoping there’s something really new and exciting.”

Locally, Dr. Sam Joseph, of Spokane Respiratory Consultants, says he’s focused on the options available to him now — specifically, treating the underlying disease impacting a patient’s lungs. Of course, he’d welcome any breakthrough that would help save lives. “There’s certainly no resistance,” he says. “The only resistance is finding something that is actually viable.”

Because lungs process air, they are the only internal organs that are constantly exposed to the external environment. They breathe in between 2,100 and 2,400 gallons of air every day. Inhaled air is divided between two airways called bronchi that lead to either lung. Inside the lungs, the bronchi branches out into thousands of smaller and smaller tubes that connect to tiny sacs known as alveoli. An average person has enough alveoli in a single lung to cover an area the size of a tennis court. SOURCE: National Geographic