Wolves in the Wool 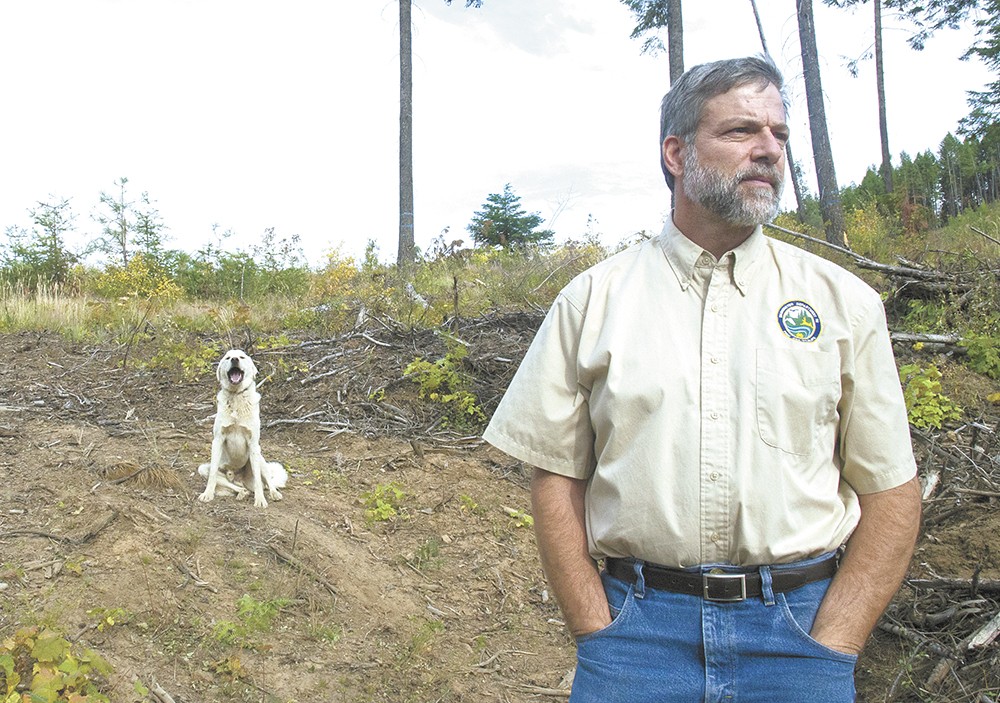 Jacob Jones
Steve Pozzanghera, regional director for the state's Department of Fish & Wildlife, watches a passing flock of sheep in Southern Stevens County that has suffered wolf attacks as one of several guard dogs sits nearby.

As dozens of sheep shuffle along

a mountain trail in southern Stevens County, a hidden sentry stands watch. A white Maremma-mix guard dog crouches almost imperceptibly amid the huddled flock, rising suddenly to bark out a warning at the approach of any intruder.

Swift and cagey predators stalk these hills. For at least two years, the young Huckleberry wolf pack has hunted these steep, timber-lined slopes without incident, but last month that changed.

Rancher Dave Dashiell, of nearby Hunters, moved his 1,800 sheep onto the private timber company property earlier this summer, just like he did last year. In mid-August, a series of attacks left more than 24 sheep dead. He called in state Department of Fish & Wildlife officials for help.

"This experience has taught us two things," Dashiell writes in a recent statement. "Once wolves start killing livestock, no amount of effort can discourage them and don't put too much trust in words."

While 10 confirmed packs reside in Northeast Washington, the Huckleberry pack's territory extends the farthest south, putting it closer to Spokane and other established communities. As wolves continue to multiply and migrate across the state, wildlife advocates and ranchers brace for new conflicts.

Dashiell has now called for the "removal," or killing, of the entire pack of up to 12 wolves, but advocates argue that nonlethal deterrents can successfully prevent wolf depredation on livestock — if given a chance.

"Obviously it's extremely controversial," he says. "It's certainly, for us, a very difficult and unique situation."

contracted from U.S. Wildlife Services, kills an adult female wolf one day after the authorization goes through. A necropsy later confirms the wolf had served as the pack's only breeding female. Attacks on Dashiell's livestock quickly decrease and officials suspend additional helicopter hunts, but range riders continue patrolling and set a series of approximately 20 traps along the latest hunting areas.

Bumping along a narrow logging road in his pickup, Pozzanghera surveys the grazing area a few days after the shooting. He explains that the department follows strict guidelines on wolf management. Lethal force is a last resort.

"We continued to have depredation events and sheep mortalities while we were escalating [nonlethal] measures," he says. "We were starting to see a pattern ... That's really the situation that we were faced with here."

Overlooking a steep landscape of twisted underbrush and tangled timber, Pozzanghera says his team has done everything it can to push the wolves away from the flock, back into their prior hunting territory on the Spokane Indian Reservation.

"People have this perception that we're operating in an area that's a couple of football fields in size and it's nice and rectangular," he says. "How hard can it be to round them up and get them to lie down at night and patrol the area? Or put a fence around them? ... It really depends on the [specific] habitat and the area you're trying to cover."

Wildlife officials have tried to partner with both Dashiell and advocates to implement a balanced approach, he says. As is typical with compromises, especially those involving wolves, both sides have voiced frustration with the process. Dashiell contends wildlife officials have failed to follow through on promises to protect his sheep, while advocates say officials did not give nonlethal deterrents enough time to change the pack's behavior.

"This is a risk of doing business in wolf country," Gunnell says of recent wolf depredations, "but there are ways to mitigate those risks."

Dashiell, who has served on the state's Wolf Advisory Group as a member of the Cattle Producers of Washington, says the increasing attacks forced him to move his sheep off the grazing property last week, costing time and money. While he's now left, he argues that nearby ranchers remain at risk.

"The time for words is over," Dashiell writes. "We need to see action. The Huckleberry wolf pack needs to be removed, not our sheep."

has approximately 50 to 100 wolves, primarily concentrated in the northeast corner of the state. Pozzanghera says state policies consider the animals a protected species as they build up to sustainable recovery numbers. The department has to balance those protections against conflicts with humans and livestock.

"As we have seen an increasing number of wolves," he says, "the amount of time that it takes to respond to wolf issues has increased significantly."

Pozzanghera says he was surprised by Dashiell's criticism of the process, explaining wildlife officials have followed guidelines from the Wolf Advisory Group and have now extended support efforts to other neighboring ranchers.

As the recent conflict winds down, Gunnell argues that placating impatient ranchers will only set back statewide repopulation efforts. Resorting to lethal force in this case cost a breeding female, an important factor in wolf recovery goals.

Livestock owners who have embraced proactive wolf deterrents, he says, suffer far fewer losses to wolves and other predators. Ranchers need to buy into that process. As wolf numbers continue to grow and spread throughout the Northwest, he argues it becomes more essential to coexist peacefully. "It's critically important that they understand that this isn't something that's just going to go away," Gunnell says of ranchers. "This is an unfortunate situation, but it probably won't be the last." ♦