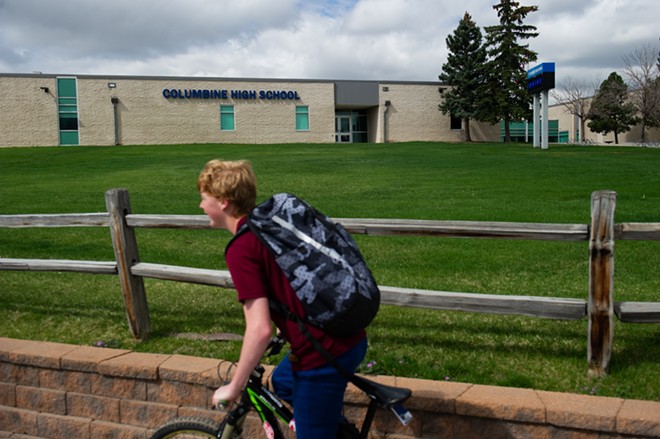 Daniel Brenner/The New York Times
A student bikes past Columbine High School in Littleton, which like many Denver-area schools was closed due to threats, April 17, 2019. Sol Pais, 18, who had traveled to Denver and bought a firearm ahead of the 20th anniversary of the Columbine High School shooting, was found dead, a law enforcement official said.

DENVER — A Florida student who officials said was on a “pilgrimage” to Columbine near the 20th anniversary of the shooting was found dead Wednesday. Her threats had prompted a massive police hunt in the Denver area and the closing of hundreds of schools.

Before she was found, authorities said Pais had traveled to Denver and was considered armed and “extremely dangerous,” leading to the decision to keep about half a million students home in two dozen school districts.

An FBI bulletin sent to local law enforcement agencies Tuesday said Pais was “infatuated” with the Columbine attack, and officials expressed concerns about her mental stability. She had also purchased a shotgun and ammunition after arriving in Denver, authorities said.

Shrader said it did not appear that she had any help from friends in the area, just a fascination with the Columbine area and the horrendous crime that took place there 20 years ago.

He said that he did not believe that law enforcement officials were “in active pursuit at the time she was found dead.”

Officials knew immediately that the threat was serious, said John McDonald, the school safety executive director of Jefferson County. “The shadow of Columbine looms pretty large,” McDonald said. “We are used to threats certainly at Columbine. This one felt different.”

For some of the youngest students, this was their first introduction to the Columbine shooting, and to its legacy.

“It’s sad and scary,” said Jeff Desserich, a math teacher at a charter school in Denver, who spent the morning trying to explain to his daughters Anais, 8, and Elena, 6, why they would not be going to class.