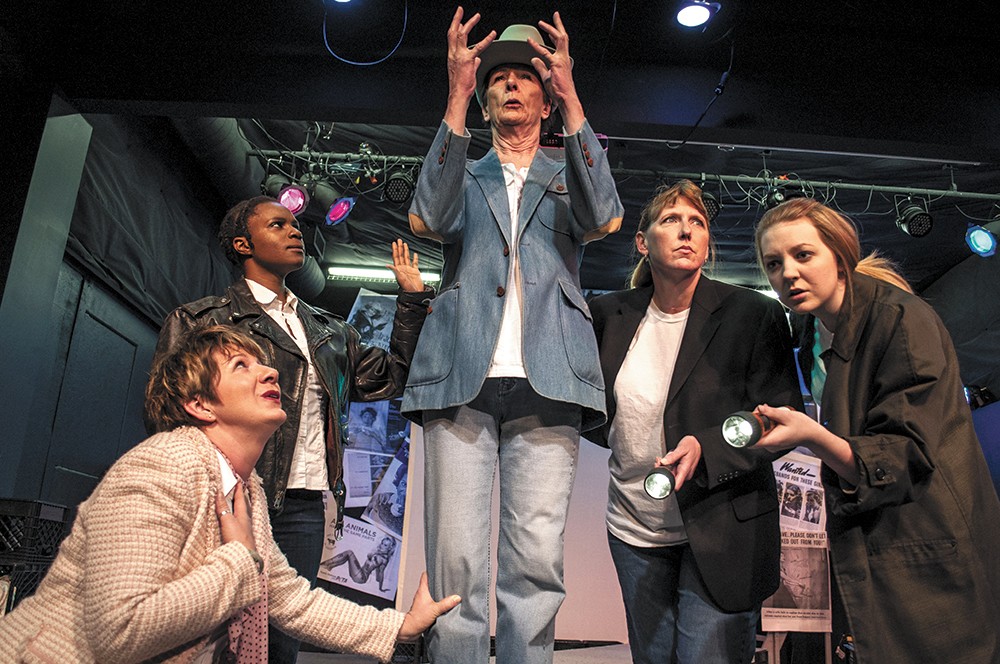 Sarah Wurtz
Stage Left Theater is no stranger to heady topics like feminism, which they inspect with their new production.

Any sociopolitical movement that lists personalities as diverse as Andrea Dworkin, Gloria Steinem, Betty Friedan and Simone de Beauvoir among its spokespersons is bound to be more nuanced than popular caricatures would have you believe. If Lydia Sargent's play I Read About My Death in Vogue Magazine could be said to have a point, it would be bringing some of those nuances to the attention of an audience that might be sketchy on the details beyond the popular caricatures.

Some confusion is pardonable. Feminism is a heterogeneous movement onto which many different actors have projected their own aspirations and agendas. It contains multitudes, from riot-grrrl graffiti to pastel-colored "girl power" bumper stickers. Dworkin spent decades crusading against the degradation of women in pornography, yet self-styled feminists later argued that pornography, when viewed in a certain light at a very particular angle, can be considered empowering to women. Sarah Palin has since self-identified as a feminist (just one of many politically expedient labels) on account of her anti-abortion stance. In its ability to be all things to all people, feminism would seem to be as fraught a concept as god.

Even in its broad capacity as a feminist primer, Death in Vogue falls prey to such contradictions, as well as omissions of convenience. It employs a parade of stereotypes — slightly tongue-in-cheek, but stereotypes nevertheless — to speak to the movement's complexity. Its men, or rather, straw men, don't enjoy even this level of distinction. Every stock male is an unreconstructed cad out to infiltrate and subvert the movement or bed its participants. Some wear suits, some wear thrift-store fatigues; all are "them" and "the opposition." The Phyllis Schlafly-type character is trotted out as a pantomime arch-traditional villain who might as well be wearing a black cape while twirling a handlebar bouffant. It makes most musicals look like master classes in subtlety.

The play also cherry-picks the movies and TV shows it singles out as perpetuating half-baked female types — Charlie's Angels, say, or The Mod Squad. But its biggest failing might be the least obvious. Death in Vogue opens at an arbitrary autobiographical point, glossing over the modest but important achievements made by women before the so-called second-wave feminism of the 1960s. Worse, its pessimistic summary of the second wave's impact sells the movement short. Vogue might never have stopped peddling a wily image of dolled-up, style-conscious, pseudosophisticates, but Ms. Magazine is still going strong.

These, of course, are all issues with the play proper. This revised production, directed (with some patriarchal irony) by Matt Day and performed by a versatile cast of five led by Jaclyn Archer (as the Playwright; she stood out in EWU's recent staging of Macbeth), is one of the most polished and self-assured that Stage Left has seen. Archer, Sara Nicholls (as the Single Mother), Esa Lariviere (the Ecologist), Moira Moore (Anti-Imperialist) and Phletha Wynn (Women's Studies Professor) generally deal well with the show's limitations of type and don't overlook the self-effacing humor of their roles.

The solidity of the production continues right down to the beautifully lit set, which is cleverly constructed out of milk crates and wallpapered with blow-ups of egregiously sexist ads, such as the gobsmacked housewife with a ketchup bottle: "You mean a woman can open it?" It wouldn't be overstating things to say that Death in Vogue, for all its flaws as a script, marks the point at which this small, idealistic theater has come into its own. ♦