Woodward to be sworn in Monday, Jess Walter gets some love from Obama, and other headlines

FOOD: In need of some shepherd's pie, fish and chips or just a good old Irish pub atmosphere?  Shawn O'Donnell's newest location in Spokane is open and ready to help.

Spokane officer under investigation after groin kick
While prosecutors declined to press charges, an internal investigation continues after a Spokane Police officer kicked a handcuffed man in the genitals, the Spokesman-Review reports. 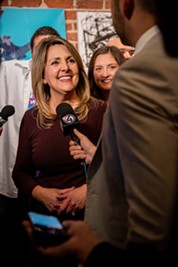 Obama gives Jess a shout
Former President Barack Obama included Spokane author Jess Walter's We Live in Water: Stories to his list of favorite books he read in 2019,  giving a shout out to the Spokane-based stories, the Spokesman-Review writes.

Idaho children still missing in bizarre case
Police have had little luck finding two Idaho children who have been missing since September, and the investigation into their mother and stepfather has expanded to include further looks at the deaths of each of their former spouses this year, the East Idaho News reports.