Words Get In the Way

Explosions in the Sky makes heartfelt music that you can't sing along to. 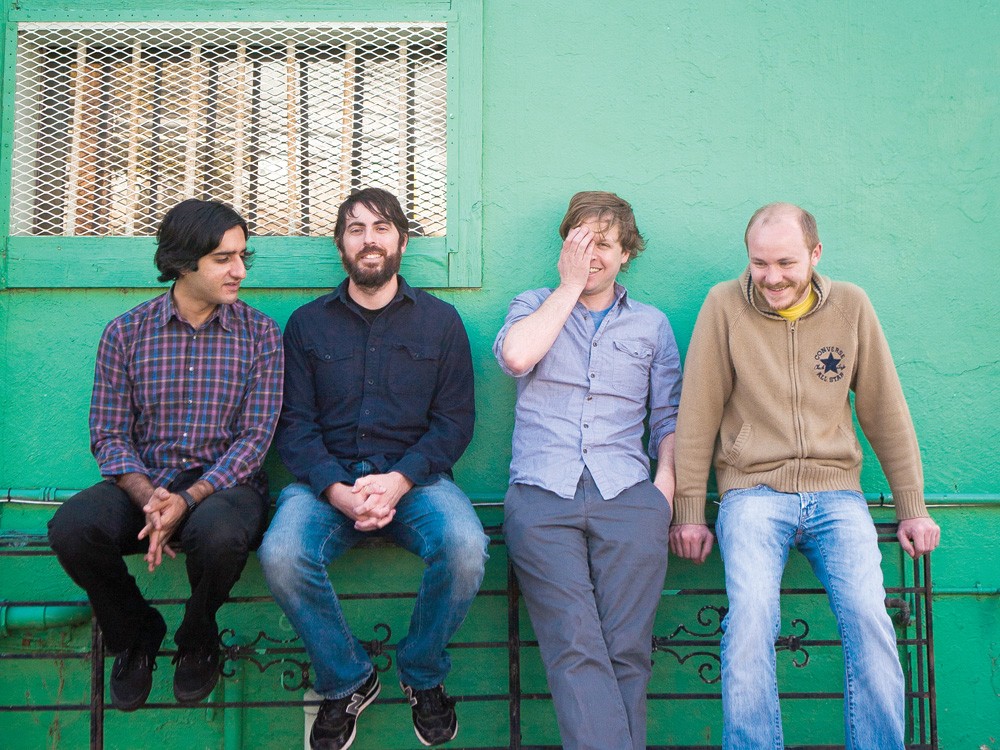 Chris Hrasky (second from right) and Explosions in the Sky

Typically, they start slow. Open and atmospheric. Notes begin to fill the space. Fills grow more prevalent. The song builds, climaxing in a cascade of furious drum beats. It is both sweeping and epic, speaking to the most personal, affected places of the subconscious without actually saying any words.

The band, Explosions in the Sky, has risen to the top of the instrumental rock world by creating audio landscapes that are, perhaps, more emotional without lyrics than with them. The Austin four-piece has garnered a reputation as a band’s band, one that even their jaded peers go out of their way to gush about.

“Even though we’ve been doing this a long time,” says drummer Chris Hrasky, “we still just sort of feel like we’re tricking people somehow. It just seems crazy to us that this has actually somehow worked.”

The band’s “trick” is part of the reason why it took almost four years for them to turn out their newest album, Take Care, Take Care, Take Care. As their fanbase grew, the band — noted for amazing live sets — stayed on tour far longer than they ever had before. The guys spent triple the time in the studio trying to shape the new tracks as they had for their previous record.

“We really took a lot of time to hone these songs into exactly what we wanted,” Hrasky says. “We’ve never been a band who wants to just kind of, like, go, ‘Aww well, this is good enough. We’ll go in and throw this together and hopefully people will like it.’ We’d rather stop playing as opposed to taking that attitude.”

Hrasky thinks the wait was worth it. “For me anyways, it’s the only record we’ve made where, when we were done with it, I didn’t feel sort of awful about it. Like, all the rest of them, I would listen to it when we were done and I would just kinda go, ‘Agh, that’s not right! And we screwed this up, and this could’ve been better.’ I was really kind of happy across the board with how [Take Care] turned out. ” “It’s not like I hate any of these old records,” adds Hrasky. “It’s just like … I don’t listen to any of them. And I feel like I might actually still listen to Take Care in a couple of years.”

One track that particularly stands out on Take Care is “Trembling Hands.” The reason? Brevity. While most of Explosions in the Sky’s catalog is comprised of long, sweeping tracks, “Trembling Hands” comes in at just over 3 1/2 minutes. It’s a departure from the norm, but that also gives the album a certain freshness.

“In some ways, [a short song] was sort of a challenge to see if we could do that in a way that sort of sounded like us, but that we still like,” he says. “We never set out to write 10 minute songs or anything; it just kind of happens that way.

“If we wrote a record of all three- or four-minute songs, I’d be actually pretty interested in what that would sound like.”

One might assume that for such prominent purveyors of instrumental rock, the songwriting process would be akin to one seamless jam. But it turns out that the creative process can be a grind for the band.

“Ninety percent of the stuff we come up with we throw away because it’s just not very good,” Hrasky says. “To me, when I listen to a lot of instrumental rock bands, the danger is sounding just like background music — just kind of innocuous. We try to write music that almost sort of accomplishes the same thing a pop song will do; with memorable melodies and things that will suck you in.”

Still, with the amount of effort it takes to achieve such a goal, it raises the question of whether the guys in the band ever long for a more tradition band setup.

“Sometimes,” says Hrasky, “if I’m listening to an old Superchunk album or something like that, I think, ‘Man, I would love to be in a band that writes these super-awesome, three-minute powerpop rock songs.’ So I kind of pine for that, to some degree.”

But don’t expect Hrasky or any of the other guys in Explosions in the Sky to branch off on their own anytime soon. They are all committed to the band at hand.

“We kind of have a ‘no side project’ policy in the band. Which is sort of ludicrous, but our energies are focused on this,” he says. “Who knows? Maybe the next Explosions record will be just three-minute power-pop songs. We’ll see…but I doubt it.”