Get the literary low down on authors, releases, spoken word and more

'WHAT THE %@&*! HAPPENED TO COMICS?' WITH ART SPIEGELMAN

Award-winning literary and artistic luminary Art Spiegelman is perhaps best known for his Pulitzer Prize-winning graphic novel Maus, a postmodern examination of the Holocaust that depicted Nazis as cats, Jews as mice and Poles as pigs. Spiegelman's other works include the sequel Maus II and the post-9/11 collection In the Shadow of No Towers, along with many covers for the New Yorker magazine. For his talk as part of Gonzaga University's Visiting Writers Series, the artist plans to take audiences on an journey through comics' history, sharing why the medium remains a relevant form of both art and literature. Gonzaga University, Hemmingson Center Ballroom, free, 7 pm (CHEY SCOTT)

Girl Waits With Gun, this year's title for the community literacy initiative organized by the Spokane Public Library, Spokane County Library District and Auntie's Bookstore, is a wild chase through the past, set in turn-of-the-20th-century industrial America. Author Amy Stewart, who will do two public presentations, was inspired to write the first in her four-book series after seeing an old newspaper headline. Girl Waits With Gun is largely based on historical events and real people, including the three quirky Kopp sisters, who become embroiled in a dispute with a powerful factory owner. Free, Spokane Valley Event Center, 1 pm and Spokane Public Library downtown branch, 7 pm (CS)

Consider Elliot Reed an adoptee of the Spokane literary community. Even though he got his MFA at the University of Florida, Reed moved to the Lilac City in time to celebrate the release of his debut novel A Key to Treehouse Living. Released earlier this month, the story focuses on one William Tyce, a parentless child who creates a glossary of his hard-earned lessons partly learned on a Huck Finn-like river trip taken by raft. Author Alexis Smith (Marrow Island) will join Reed to introduce this vibrant new book to Auntie's visitors and this newly minted Spokane author to his new neighbors. Auntie's Bookstore, free, 7 pm (DAN NAILEN)

Stock up on stickers, cards, drawings, comics, books and other sweet stuff at the second annual Spokane Zine Fest, celebrating small-press creativity from the local community and beyond. Don't know what a zine is? That's totally cool. This event is a great introduction to the print genre of (usually) self-published mini magazines with limited print runs. The Zine Fest is organized and was founded by Spokane writers Chelsea Martin and Ian Amberson. Get all the details at spokanezinefest.com. The Bartlett, free, 11 am-5 pm (CS)

Spokane is hosting a slew of big-name writers this fall, including New York Times-bestselling author Ransom Riggs, the pen behind the pages of Miss Peregrine's Home for Peculiar Children. Riggs is coming to talk about his newest title and fourth installment in the Miss Peregrine series, A Map of Days. He'll be reading at the Spokane Public Library in conjunction with Auntie's Bookstore, which means fans will need to preorder a copy of the new title in order to claim a seat at the event. (Don't delay.) A Map of Days, out Oct. 2, reunites protagonist Jacob Portman with Miss Peregrine and crew, who find themselves facing a new discovery and many adventures to come. Spokane Public Library downtown branch, $23 (book purchase is ticket to event), 7 pm (CS)

In an effort to create conversation surrounding contemporary issues, Whitworth University's President's Leadership Forum brings national leaders in their fields to the Inland Northwest. Colin Powell, former secretary of state, will be this fall's guest, giving a speech titled "Diplomacy: Persuasion, Trust and Values." Powell has a long list of achievements, including 35 years of service in the U.S. Army, serving as the youngest chairman of the Joint Chiefs of Staff for presidents George H.W. Bush and Bill Clinton and serving as the first African American secretary of state. Spokane Convention Center, $75/person, $750/table, 12-1:30 pm (BROOKE CARLSON)

As cliche as it may sound, everyone has a story to tell. And yes, some stories are more interesting than others. Pivot is a live storytelling series in which community members recount anecdotes on stage that conform to a particular theme. Storytellers are given the prompt "monsters" for this particular night of narration. Might be a little spooky, might be a little funny, will definitely be entertaining. Washington Cracker Co. Building, $10 suggested donation, 7 pm. (BC)

So you want to write a novel. Maybe a memoir. Or you want to become a freelance writer. The Spokane Writers' Conference, hosted by the Spokane County Library District and instructed by local writing experts, is for you. The two-day workshop includes sessions on writing for kids and young adults, effective interviewing techniques, the ins and outs of self-publishing, how to start and actually finish a novel and how to effectively and respectfully write about marginalized groups. Not only will aspiring and committed local writers walk away with plenty of new tools in their chests, they'll also connect with other passionate wordsmiths and a few successful, widely published local authors. North Spokane Library, free (registration required), Sat from 10 am-5 pm, Sun from 1-4:30 pm. (CS)

What book is America's No. 1 favorite of all time? Harry Potter? To Kill a Mockingbird? Dune? Gone With the Wind? The Lord of the Rings? This is the lofty question being asked by PBS's new fall series, The Great American Read. A simultaneous public campaign asks readers of all ages to vote for their favorite book, choosing from a list of 100 preselected titles that includes major literary classics, contemporary best sellers and otherwise influential books. The Great American Read series airs Tuesdays on PBS, examining each book's impacts on American life and culture. To close out the series and learn which book is the country's favorite, join local station KSPS and the Spokane Public Library for a celebratory watch party, for which literary-themed costumes are encouraged. Spokane Public Library downtown branch, free (registration required at ksps.org), 6:30-9:30 pm (CS)

Two-time Pulitzer Prize winner and long-time New York Times columnist Nicholas Kristof is a weekly must-read in my household. His travels into the world's news hot spots and oft-forgotten places offer a sobering view of humanity, and the United States' role in both the uplift and suffering of people across the globe. Whether he's reporting from protests in Tiananmen Square or the Darfur genocide (his coverage of each earned him those Pulitzers), or offering hope via books written with his wife Sheryl WuDunn like A Path Appears, Kristof always has something to say that's worth reading, or in this case, listening to in person. His Spokane visit is a joint production of Humanities Washington and Gonzaga's Center for Public Humanities. Gonzaga University Hemmingson Center, $10, 7 pm (DN)

Idaho, by Emily Ruskovich, tells the story of a couple living in North Idaho, reaching to uncover secrets of the past that have colored their lives with grief. The book is Ruskovich's debut novel and will come close to the heart of many Inland Northwesterners as it's filled with depictions of Idaho's panhandle. The state's community reading initiative, Everybody Reads, is hosting eight opportunities to come together and discuss the book in various locations around the area, including the Palouse and Lewis-Clark Valley. Times and locations vary; see schedule at everybody-reads.org, free (BC) 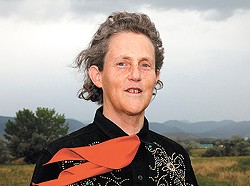 One in 59 babies are born with autism. Dr. Temple Grandin was one of those children. She's now a respected author, activist and speaker on autism and animal behavior. Her speech on autism and different ways of thinking will involve her own diagnosis experience, as well as details about the autism spectrum. In addition to her accomplished writing and speaking career, she works as a professor of animal science at Colorado State University. Half of the cattle in the U.S. are processed in facilities that she's designed. North Idaho College Schuler Performing Arts Center, $25, 6-8 pm (BC) ♦

The original print version of this article was headlined "WORDS"