Mark Few on life with nine freshmen from around the globe. Plus, previews of the men's hoops teams. 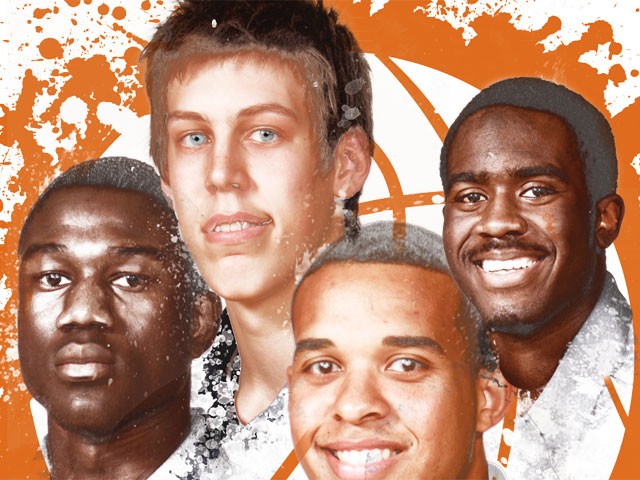 Mark Few takes pride in Gonzaga’s strong academic reputation, but when asked if Bulldog coaches have been forced to “dumb it down” in preseason workouts for the team’s 10 newcomers, Few quickly answered in the affi rmative. “Absolutely,” he says. “We’re eons behind where we were last year.”

So is Gonzaga’s long run of NCAA tournaments and West Coast Conference dominance in jeopardy? If Few is concerned, he’s not showing it — particularly after WCC coaches voted Gonzaga to repeat as champion. “The expectations are nothing new up here,” he says.

What is new is the arrival of nine freshmen (three saved a year of eligibility by redshirting last year), plus sophomore transfer Bol Kong from Canadian small-college power Douglas of Vancouver.

Asked which newcomers fi gure to play the most minutes, Few says, “At this point, it would probably be a better question which ones won’t see a lot of minutes. They’re all ready to play. They can all help us in different ways.”

Few is already fretting about how to spread out the minutes among all the talented newcomers.

“We have a lot of options… they play hard all the time,” junior guard Steven Gray says.

German forward Elias Harris was the only freshman in the starting lineup in Gonzaga’s lone exhibition game. Canadian forwards Mangisto Arop, Kelly Olynyk and Bol are other promising freshmen, along with center Sam Dower from Osseo, Minnesota, and point guard G.J. Vilarino from McKinney, Texas. Also joining the squad is a skinny kid from Gonzaga Prep, just up the road from Gonzaga University. Sound familiar? Yeah, that’s the way John Stockton arrived on campus back in 1980; this time it’s his son, David, who’s going from bullpup to bulldog.

Few chooses to apply a positive spin to the arrival of so many new players at one time: “We can really stress execution and maybe go in some areas we haven’t been as far as what we’re doing offensively and what we’re doing defensively,” he says. “It’s going to be kind of a work in progress.”

CBSSPORTS.COM RANKING: 28th out of 347 NCAA Division I teams

TICKETS: 313-6000 (But season ticket holders and GU students use virtually all tickets.)

OUTLOOK: The Bulldogs lost four of the top ive scorers off one of the best teams in school history. However, a talented backcourt returns in senior Matt Bouldin, junior Steven Gray and new starting point guard Demetri “Meech” Goodson, a cat-quick sophomore. Bouldin, a well-rounded player who was second on the team in scoring last season with 13.6 points per game, is a leading candidate to win Player of the Year honors in the WCC. Center Robert Sacre, injured last season, provides a much-needed big body at 7 feet and 247 pounds.

WHAT'S SCARY: The Zags need a handful of their nine freshmen to contribute right away.

COACH FEW SAYS: “I think Matt is one of the best players in the country. I feel Steven has the potential to be an All-WCC guy and a very good player at the national level. I think Meech, for a point guard, can hold his own defensively with his quickness, and he’s shooting the ball much better this year.”

BONUS ROUND: Few clinched quote-of-the-year honors with his response to Washington’s proposal to resume playing Gonzaga, but only if the games are all played at Seattle’s KeyArena, a few miles from the UW campus. “The chances of that happening are about the same as Bigfoot having my baby,” Few said.

OUTLOOK: The Eagles will be just fine if they can find someone to lift the lids off the baskets. Eastern shot a frosty 42 percent from the field last year, including 32 percent on 3-pointers. Mighty-mite guard Benny Valentine finished third in the Big Sky with 15.2 points per game, but he wore his arms out doing so, hoisting a whopping 13.5 shots per game and canning just 39 percent (though he hit 35 percent from 3-point range). “We need Benny to be more judicious with his shot selection,” Earlywine understated. Eastern has a solid inside-outside combo in the 5-7 Valentine and 6-9, 250-pound center Brandon Moore, who averaged 11.2 points last season and ranked second in the Big Sky with 6.8 boards.

WHAT’S SCARY: The Eagles could miss the Big Sky tournament for the fourth straight year (even though six of the conference’s nine teams qualify). Eastern played in the tournament the previous nine years.

WHAT’S REALLY SCARY: Eastern is 6-27 on the road the past two years, including 3-13 last season.

COACH EARLYWINE SAYS: “We do have speed and quickness on the perimeter. We are going to get out and try to run and play faster.” (HS)

CBSSPORTS.COM RANKING: 89th out of 347 NCAA Division I teams

OUTLOOK: The Cougars might be more athletic than the two WSU teams that won 26 games and advanced to the NCAA tournament a couple years back, but they are extremely young (with only one upperclassman), inexperienced and lacking in size down low. Sophomore forward DeAngelo Casto, the former Ferris High School standout, is the heaviest player on the team at 6-8 and 231 pounds. “We’ve got to go with quickness,” Casto said. “We’re going to outwork people.” Freshman point guard Reggie Moore, a late signee by Bone, is preposterously quick. “A huge get for our program,” Bone said.

WHAT'S SCARY: Bone, who guided Portland State to its irst NCAA tournaments the past two seasons, is bringing his uptempo offense to a program that enjoyed considerable success as a slow-down, defense-irst outit under Tony Bennett (who’s now at Virginia).

WHAT'S REALLY SCARY: Sophomore guard Klay Thompson, who averaged 12.5 points per game last season, is the only Cougar who has ever scored more than 4.6 ppg in college.

SOPHOMORE GUARD MARCUS CAPERS SAYS: “I don’t see why we can’t be in the top ive in the Pac-10, probably the top three. It ain’t going to be easy. All the freshmen have got to understand that. We’re a really young team. That’s the only thing everybody knocks us for. No one said we don’t have good players.”

BonuS round: Lindy’s magazine named Thompson the top NBA prospect in the Pac-10.

OUTLOOK: The Vandals suffered a devastating blow last month when senior guard Derisa Taleni, the team’s leading scorer last season, suffered a season-ending knee injury. Taleni averaged 14.5 points and was the WAC Newcomer of the Year. Taleni made secondteam All-WAC with teammate Yinka Olorunnife, a 6-foot-1 forward who averaged 12.9 points and a league-leading 11.1 rebounds. The junior from Windsor, Ontario, was only the WAC player to average a double-double. Senior point guard Charlotte Otero led the nation in minutes played last season, averaging an amazing 40.5 (counting overtime games). She sat out a total of 4 minutes the entire season.

BONUS ROUND: Newlee, who did wonders at Idaho State before moving to Moscow last year, turned around a Vandal program that had been racked by turmoil and a steady stream of players quitting the team. After going 4-25 in 2007-08, the nine-win improvement by the Vandals last season ranked eighth in Division I.

What Else is Out There?