Four years since its debut, Roast House lands a national award for its ethical, fair-trade coffee 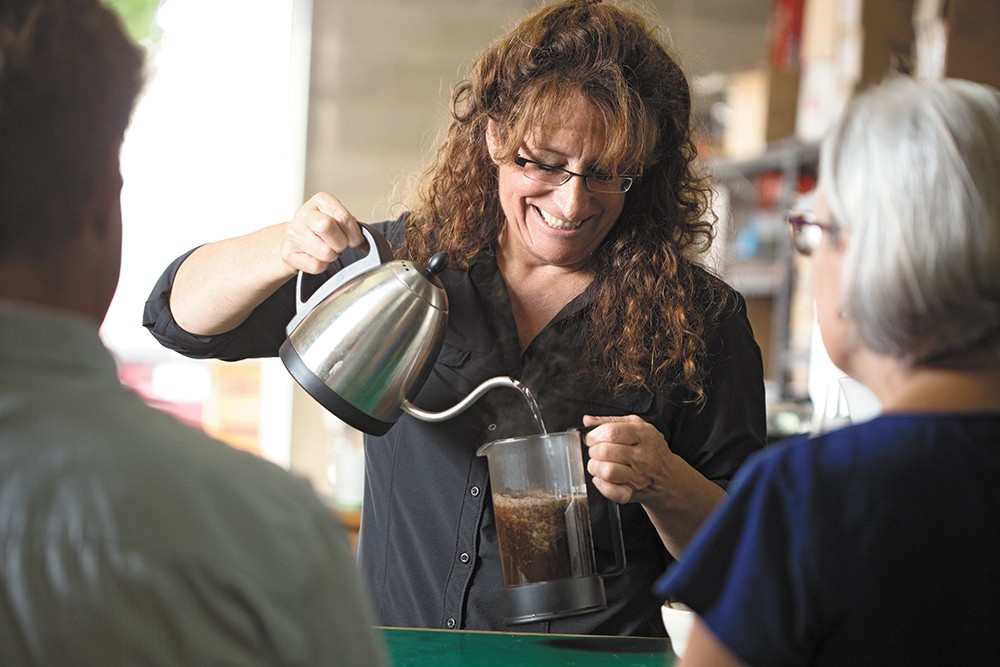 Below a massive mural depicting a coffee bean's journey from the lush jungles of Central America to the small Spokane warehouse, laminated sheets of printer paper hang crookedly on unpainted drywall, noting names of countries: Nicaragua, Mexico, Guatemala. Stenciled labels indicate weight in kilos on the burlap sacks piled beneath.

Above the din of beans clattering into a giant funnel on top of the dark, emerald-green roaster, music plays faintly from desktop computer speakers. The heated beans inside the furnace-like machine give off a nutty, earthy scent with a hint of fruit. It's a busier-than-usual Thursday morning at Roast House, a small roasting operation on Spokane's North Side.

A little more than four years ago, owner Deborah Di Bernardo became so fed up with the coffee industry she quit her job as wholesale manager at a large, local roasting company. Back then, she never would have predicted the local success and achievements Roast House has since attained — most notably, landing a 2014 Good Food Award last month for its Guatemalan Batzchocola coffee.

"What is so glorious about this award, when we pulled the coffee to compete we pulled it out of a bin," Di Bernardo says. "We didn't go looking for special coffee to compete with. We just wanted to play with other people in our industry — we never really thought about winning."

The annual San Francisco-based culinary competition — now in its fourth year — recognizes food producers for both social responsibility and environmentally sustainable production, as well as flavor. Entries in categories such as beer, cheese, chocolate, coffee, pickles, spirits and oils are judged during a blind taste test, as well as through a vetting process to verify industry-specific criteria. Coffee entrants had to meet fair trade and sustainability benchmarks, among others. Of the roughly 140 coffee-roasting entrants, including many large and well-known roasters, Roast House took home top accolades alongside 13 other roasters across the U.S.

For Di Bernardo, aside from gaining national recognition for her modest, specialty coffee-roasting outfit (she's since turned down offers from national retailers to create exclusive blends), the award solidifies her beliefs in owning a socially and environmentally conscious, local business.

"The old [coffee industry] model; my belief is that it isn't sustainable," Di Bernardo says of conventional growing and harvesting standards. "You can't keep deforesting and using chemicals and paying the bare minimum and hope that model goes on and on. When you're in coffee you either know this and you do something, or you know it and you decide you're going to make max margins, and I just couldn't."

Roast House's coffee beans are all single-origin, shade grown in natural forest environments and bought at an equitable price from small farmers and co-ops the company hand-picks from around the world. It's considered specialty coffee because the beans fall into the top tier of Grade 1 (coffee is graded on a scale of 1-5, with 1 being the highest). Aside from being sustainably produced, these beans come from specific microclimates. Much of the resulting flavors are due to the specific soil and climate in which the coffee is grown.

"If the ecosystem is complete, it makes my job really easy," she says. "It's expensive, but it makes my coffees exquisite."

On average, Di Bernardo pays 40 to 50 percent more for her coffee than she would pay for non-fair-trade organic. This means Roast House's profit margins are smaller, but she doesn't mind. "We're slowly affecting consumers' understanding of this heavily traded commodity. I don't think we're going to change the world, but I hope we can slow down some of that."

Wildly curly brunette hair held back from her face with a yellow No. 2 pencil, Di Bernardo flits around the warehouse as customers stop by to pick up orders.

The granddaughter of first-generation Italian immigrants, Di Bernardo grew up in a suburb outside Manhattan in a house with 26 other family members. She has a hearty laugh and loves being around people in general — even more so when socialization centers around food or drink.

"It was easier to give away coffee than to buy ads. It satisfied my need to keep doing community work and to get awareness for my little company," she says.

After winning the Good Food Award, Roast House looks positioned to take off and join the ranks of other large, well-known Inland Northwest coffee roasters. But Di Bernardo doesn't want that. Yes, she wants to be well-known here, but at the same time she wants the company to stay small. That means not outgrowing the business' current location and not taking on so many accounts that she can't acquire enough coffee to fill them, or pay her three employees a living wage.

Roast House distributes most of its coffee as a wholesaler. Di Bernardo sells to a few local grocery stores in the area, but many customers come directly to her to purchase 1-pound bags. She's set up several partnerships with locally owned restaurants — many exclusive — to serve Roast House coffee, including at Chef Adam Hegsted's new spot Yards Bruncheon, as well as Chairs Coffee, Manito Tap House, Italia Trattoria, Atticus, The Satellite and a host of others.

When Bethe Bowman and Anna Vogel were preparing to open their Browne's Addition restaurant Italia Trattoria more than three years ago, there was no question that they would serve Roast House coffee.

"We value the same things in the community ... It was a perfect match, the way they roast and the flavor profiles," says Bowman. "Deb understood we didn't want too many acid profiles — it had to be cohesive and work with the food."

Restaurants produce a lot of waste; here's how some in Spokane are working to curb that