Meet two people who actually want to be in Congress 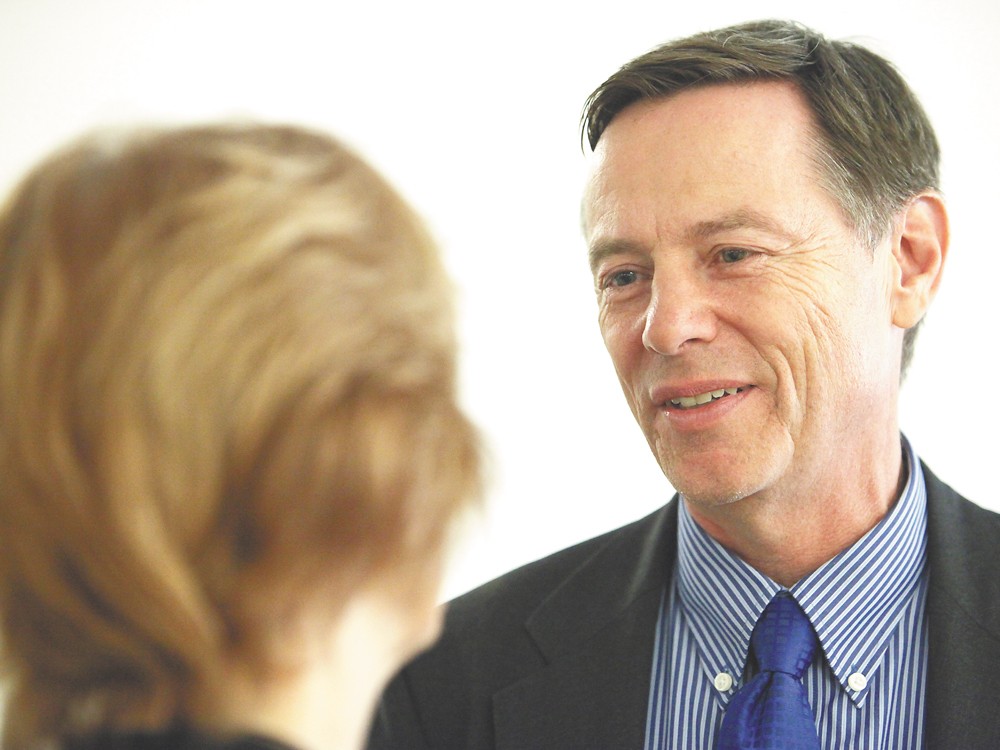 The swirling red and blue screen behind Cathy McMorris Rodgers gives an impression of the congresswoman swimming in a vast aquarium tank. It’s the opening day of the Republican National Convention in Tampa, and McMorris Rodgers is the party’s master of ceremonies. As she speaks, her hands wave and her body swerves behind the podium: She’s a cheerleader and a motivational speaker wrapped up in one grand flag. McMorris Rodgers, 43, declares her pride in Eastern Washington before tossing out some red meat.

“Each speaker will be joining together to send a message to President Obama,” she says. “And that message is three simple words: We built it.”

The audience explodes in a chant of “We built it,” as the TV screens behind her erupt in stripes of red and white. She goes on to tell the crowd about working in the business her family used to own, Peachcrest Fruit Basket in Kettle Falls, where the family moved from British Columbia when McMorris Rodgers was a junior in high school. McMorris Rodgers worked for 13 years at Peachcrest, pruning trees and picking and selling fruit.

As of Sept. 30, Republican Rep. Cathy McMorris Rodgers raised $1.75 million and had nearly $800,000 left to spend. The congresswoman gets a slew of small and local donations, then pulls in larger amounts from Western Washington and political action committees (PACs) across the country.

Democrat Rich Cowan has raised $304,000 as of late September. Much of that came from individual contributions. As of mid-July, Cowan had spent $130,000.

John Thompson, producer on The Expendables ($550)

“I can assure you that my family built that business from the ground up,” she says, to hollers and cheers.

“Unlike President Obama, I know that small businesses are the true engine of our economy, not the government,” she adds. “And what business needs to grow and create jobs is less taxes and less regulation, not more.”

A month later, McMorris Rodgers is in Spokane, taking credit along with Democrat Sen. Maria Cantwell and others for securing funds for the city’s long-neglected north-south freeway. Touting a transportation package she helped put on the president’s desk, McMorris Rodgers draws chuckles when she says, “We do get some things accomplished in this Congress.”

Still, the 112th Congress, according to various measures, is one of the worst in the nation’s history. This is the Congress that has caused Standard and Poor’s to downgrade America’s credit rating for the first time ever. The Congress that has voted to repeal Obama’s health care law 33 times, to no discernible affect. The Congress that, in February, had a 10 percent public favorability rating — lower than Americans’ opinion of BP at the height of its oil spill.

McMorris Rodgers, a former state lawmaker, is now a member of the Republican House leadership. As she runs in what has been a safe district since first being elected in 2004 — no opponent has come within 12 points of her — McMorris Rodgers must convince voters that’s she not part of that dysfunctional Congress, but part of the wholesome Congress that brings home money for freeways and works on hydropower projects. She faces Democrat Rich Cowan, the former head of film company North by Northwest, who accuses the congresswoman of not minding Eastern Washington’s affairs.

Can she do it?

McMorris Rodgers sits in a chair in the back office of her campaign headquarters in Spokane. Today — the same day as the freeway speech — has been a busy one. The congresswoman received a health care award at St. Luke’s and had a lunch with constituents. She spent the evening at the office taking questions from a Boy Scout troop, recording a campaign phone message and giving her campaign workers a pep talk.

The conversation inevitably turns to the economy.

“What you find here in Spokane is that we really need more of those middle-income jobs,” she says. “Where our young people and college grads don’t feel like they have to move away from Spokane in order to get the jobs that can support a family.”

She talks about corporate taxes being too high and the tax code too complicated — issues she mentions when asked what the next Congress could do to bring America some prosperity. McMorris Rodgers favors extending the Bush tax cuts — which are set to expire at the end of the year — for another year until some sort of congressional compromise can be found.

Though she voted for President George W. Bush’s 2008 economic stimulus plan ($170 billion), she voted against Obama’s stimulus package ($787 billion) in 2009. McMorris Rodgers also voted against both the bank and auto bailouts of 2008.

“It’s estimated that between 20 and 30 percent of health care costs are driven by defensive medicine,” she says.

Rich Cowan is sitting in the lounge of the Southside Senior Center, and he’s shaking his clenched fists in front of his chest like he, too, is a cheerleader. Though in this case, it looks like he’s mixing up a martini.

“We’re a country of teams, and we all want to be part of a team,” he says, explaining the nature of the country’s warring political parties. “But really, this is Team USA. The urgency is now. We can’t kick the can down the road with a lot of these issues.”

This has been a familiar refrain in Cowan’s campaign: friendly, good-natured bipartisanship.

“When you get to know each other as people,” Cowan says, “you can get a lot more done than when you don’t.”

Unfortunately for Cowan, that mode of politicking has been on the decline, at least since the early 1990s. Congress, in fact, has been voting more along party lines now than at any time in the last 130 years, according to voteview.com, a political research project at the University of Georgia.

Cowan, 56, is a former EMT and television producer. Born in Spokane, he spent most of his childhood in Kirkland, and returned east to get undergraduate and master’s degrees from Washington State University. He worked a couple of stints at KHQ. As he realized television markets like Spokane were phasing out local programming, Cowan faced the prospect of climbing the career ladder somewhere else. He chose to stay.

“Let’s mortgage the house, let’s buy equipment and start a company, and that was the beginning of North by Northwest,” Cowan says. The company’s first project was for Washington Water Power — now Avista. By the time he left, the company had 40 full-time staff and gave out contract jobs to 80 to 100 more people when a film was being made, he says.

Cowan talks about cutting spending — cutting subsidies for oil companies and corporations that outsource jobs, consolidating the government’s IT systems, doing away with military projects that the Pentagon says it doesn’t even need — in order to ease Congress’ looming showdown on debt. He’d support letting the Bush tax cuts expire on people making more than $200,000 per year. And Cowan agrees with McMorris Rodgers that the country’s corporate tax rate should be slashed.

But Cowan, while stressing his desire for friendship and cooperation across political lines, is attacking McMorris Rodgers — who has homes in Spokane, San Diego and Washington, D.C., where her oldest child attends school — for not spending enough time in the district. It’s a point he’s hammered home in interviews and during the pair’s televised debate. His campaign even made a low-budget ad featuring McMorris Rodgers in a cartoon plane hopping around to faraway cities to raise money for Republicans.

McMorris Rodgers spokesman Todd Winer points to a variety of events the congresswoman has attended in 2012: a town hall at the Lincoln Center, an open forum in Newport, a speech in Walla Walla, a business roundtable in Colville.

By the end of the week, the congresswoman will have visited every county in the district, Winer says.