‘Worst Is Over,’ Cuomo Says as States Snub Trump on Restarting Economy 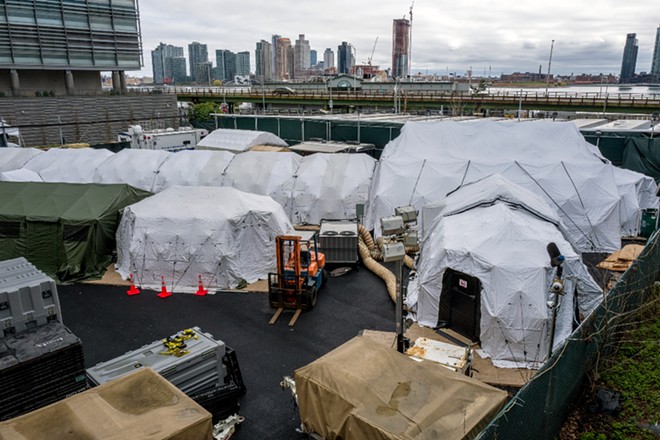 Jonah Markowitz/The New York Times
A temporary morgue set up outside the office of the chief medical examiner in New York on April 4, 2020.

By Luis Ferré-Sadurní and Jesse McKinley


With the number of new deaths and rate of hospitalizations falling in New York, Gov. Andrew Cuomo said Monday “the worst is over” in the coronavirus pandemic, and he announced an alliance with six other Northeastern governors to explore how to eventually lift restrictions — a move that appeared to be an implicit rebuke to President Donald Trump.

The governors from New Jersey, Connecticut, Pennsylvania, Delaware, Massachusetts and Rhode Island said they would begin to draw up a plan for when to reopen businesses and schools and how quickly to allow people to return to work safely, although the timeline for such a plan remained unclear.

The joint effort was the first of two announced Monday: The governors of California, Oregon and Washington, three Western states that were among those that felt the effects of the virus before it spread rapidly in the Northeast, announced a similar pact. All but one of the 10 governors on the two coasts are Democrats.

The president spent Monday assembling a task force to advise him on a path to restoring some semblance of normal life in America. He rejected the notion that the decision would be left to the governors, even though they have been the ones to close the schools and issue the stay-at-home orders, not the federal government.

The federal government issued guidelines last month recommending that Americans refrain from gatherings of over 10 people and take other measures, but the binding orders to close were issued by the governors and mayors. It also remained unclear how Trump could overrule a governor who wanted to keep businesses and schools closed even after the president wanted them to reopen.

The focus on reopening the economy came even as the death toll in New York state surpassed 10,000 people, but other indicators continued to plateau or decline slightly, leading Cuomo to declare that the worst of the outbreak may have passed.

Nearly 19,000 people remain hospitalized in New York, the epicenter of the pandemic in the United States, but the rate of hospitalizations has slowed markedly over the last week, and the 671 deaths announced Monday marked the lowest one-day death toll in a week.