Morgan Sanders, a former facility engineer, first realized something was wrong when he started falling off ladders and getting dizzy driving.

Then, nearly a decade ago, came the devastating diagnosis: He had a brain tumor. During the depths of the recession, he struggled to pay his bills, including his mortgage and his Spokane County property taxes.

"I worked extremely hard to keep up with my taxes," Sanders says. "[But] I was a year behind. After you miss the first due date, it escalated something fierce."

"Other people who were struggling in an economy that was failing were losing their homes left and right," Sanders says.

About seven years ago, he started urging reforms, successfully lobbying the Legislature to allow treasurers to accept partial payments of unpaid property taxes. Yet he wants the state to go further and reduce the sky-high penalties punishing those who fall behind.

"I'm not talking about the deadbeat that just doesn't want to pay taxes," he says. "I'm talking about Mr. or Mrs. Joe that loses their job in a bad economy. Or the women whose husband dies and didn't know they were behind because they were struggling."

"We get calls all the time in the office from folks that are concerned about that," Volz says.

Volz, however, is in a unique position to do something about it: He's also a state representative. In that role, he's repeatedly introduced bills to simply eliminate the extra penalties on unpaid property taxes.

"I've fought every year to just reduce that to 12 percent simple interest," the Republican lawmaker says. During this year's legislative session, he plans to try again.

But they've also drawn bipartisan opposition, including from many treasurers in other counties who warn that killing the penalty would sabotage county revenues while rewarding tax scofflaws.

A decade after the depths of the Great Recession, another potential housing crisis is brewing: With key sectors of the economy crippled by lockdowns and virus-control measures, record numbers have lost their jobs. State and federal governments have issued eviction moratoriums, preventing landlords from booting tenants who aren't paying their rents. But what was a relief for tenants was a crisis for the landlords.

"We've had a number of landlords — with nonpayment of up to 10 months from some tenants — pursuing bankruptcy," says Steve Corker, president of the Landlord Association of the Inland Northwest.

Last year, property owners in Spokane County got a break. Spokane County Treasurer Michael Baumgartner significantly delayed the property tax filing deadline, giving beleaguered taxpayers more time to scrape together payments. But Corker says the financial impact of the moratorium is likely to hurt landlords well into 2023, and the penalty for unpaid taxes exacerbates the issue.

"When you throw 23 percent on top of your bill, it makes that bill that much harder to pay," says Corker. "Honestly, if credit card companies or somebody else charged those kinds of rates, they would be outraged, and rightfully so. ... Today, Jesus Christ would come in the courthouse and throw them out on the street. It's punitive and ridiculous." 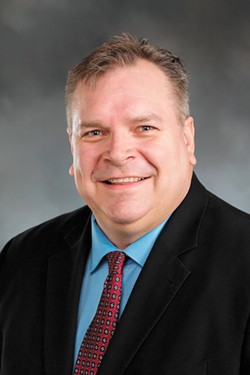 In fact, in most circumstances, charging 23 percent annual interest rates is flat-out illegal in Washington state, Volz notes. But when it comes to unpaid property taxes, the law makes an exception.

"It's wrong for everybody else, but it's OK for property taxes," Volz says.

While Republicans like Volz, Baumgartner and Rep. Rob Chase — another former Spokane County treasurer — champion reducing the penalties for missing the tax deadline, so do nonprofits like the Northwest Justice Project that try to save homeowners from foreclosure.

"Those homeowners who get deep into the foreclosure process are the most vulnerable among us," Joseph Jordan, supervising attorney for foreclosures at the Northwest Justice Project, said at a legislative hearing last year.

And while exceptions can be made in some circumstances like a death in the family, Jordan argued that the vulnerable people often don't learn of them until they're already deep in the hole.

"It seems that the penal nature of the property tax scheme in Washington unfairly targets the most destitute," he said.

Spokane County Commissioner Al French, however, sees the legislation as a misguided piece of populism.

"It's a bad piece of legislation," French says. "It rewards people that don't pay their property taxes, and it punishes people who do."

His main objection: Those steep penalties end up funding an important part of the county's already-stressed budget.

"This will rob from Spokane County over $2 million of revenue that we use to pay for public safety," French says. "That, in my world, is about 20 sheriff's deputies. Who's going to get punished by this is those people that pay their taxes and have an expectation of government services."

Volz says the cost to Spokane County wouldn't be quite that high — it's closer to $1.2 million to $1.6 million. And Baumgartner argues that it's a bad practice to rely on people doing the wrong thing to raise revenue.

"It's like setting up a speed trap to fund the government," Baumgartner says. "It's just predatory."

According to the Tacoma News Tribune, Point Ruston in 2018 owed more than $750,000 in back property taxes, late-fees and interest on a parking garage and other properties.

Point Ruston developer Loren Cohen told the Tribune that they'd intentionally decided to delay paying taxes on some properties, arguing it made more sense to "keep that money working, either in an apartment building or buying other land to develop."

"It's like setting up a speed trap to fund the government. It's just predatory."

"Point Ruston happens to be half in the city of Tacoma, and the other half in the town of Ruston, a town of 700 people," Lonergan says. "When their taxes were not paid on time, it was a tremendous burden."

Lonergan notes that the whole reason why the Legislature introduced such steep penalties for unpaid property taxes was that — in the era of skyrocketing inflation and interest rates in the late '70s and early '80s — it was smarter for property owners to delay paying taxes as long as possible.

Since interest rates are so much lower today, he acknowledges the property tax penalties may seem "extreme," but there's no guarantee that rates will stay this low, he says.

He worries that reducing penalties might result in more property owners procrastinating, lulling them into a false sense of security until it's too late.

"They're at risk of losing their entire property," Lonergan says. "After three years, our job is to auction off your property if you do not pay your taxes."

But Baumgartner counters by arguing that when Spokane County delayed its tax property deadline last year, it had effectively eliminated the property tax penalty for a year, almost as a kind of natural experiment. Yet they saw no decrease in tax collection, he says.

For every wealthy Point Ruston example of a rich developer getting away with it, Baumgartner and Volz can point to a more sympathetic example like Sanders.

"We had a single mom who had a broken transmission and couldn't pay her taxes and she was being charged 23 percent," Volz says. "It really impacts our vulnerable fixed-income folks." ♦

The original print version of this article was headlined "Losing Interest"