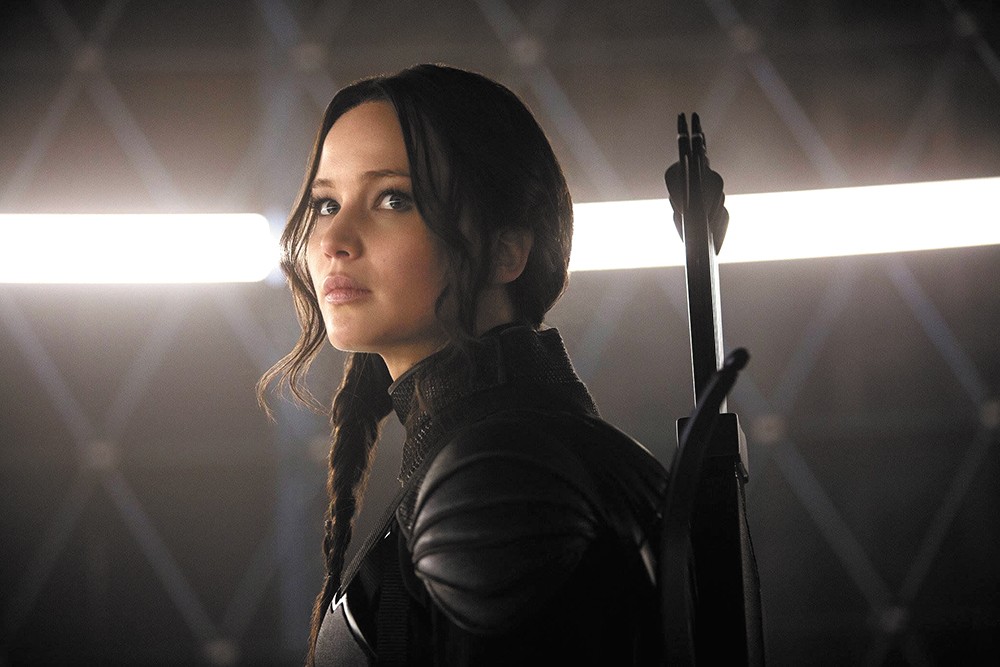 Jennifer Lawrence in the final installation of The Hunger Games.

There are many ways in which the Hunger Games

movie series has been groundbreaking. It has given us a world-changing heroine in the mold of the countless boys and men Hollywood has cast in such a role, and showed up the caricature by depicting her as more human than most of them: more conflicted, more unsure, more afraid, yet also more brave for overcoming all that... and also simultaneously more principled and more selfish.

Katniss Everdeen has never been about some romantic, idealistic notion of heroism; she has always been about protecting the people she loves. The series has given us a look at a world in which women are presumed to be as capable and as authoritative as men, and has delved deep into the potent influence of propaganda.

With the final installment, we might even see the films that have come before as a kind of propaganda that has primed us to expect a certain sort of wrap-up to the story of Katniss and her rebellion. Spoiler alert (not really): we do not get that kind of ending. What has already been one of the smartest and most enthralling sci-fi film series ever sees itself to a thoroughly engaging and very fitting end by questioning all of our assumptions about war, politics and peace, particularly as blockbuster film series tend to present them. Where things go here might feel anticlimactic to some. There is no final battle that, as bloody and brutal as it could have been, nevertheless would have represented a neat and tidy finale and a pat triumph of good over evil. Nothing here is that easy.

The thwarting of war-movie clichés starts early, when the public face of the people's unrest, Katniss Everdeen (the amazing Jennifer Lawrence), doesn't lead the rebels of District 13 in what everyone hopes will be a definitive assault on the Capitol. Instead, she's bringing up the rear with the propaganda filmmaking team, making videos that will hopefully sway the hearts and minds of the Capitol citizens, who naturally aren't on the rebels' side. Why should they be? We don't see any of Katniss' "propos" this time, only her disgust with being forced back into this role again, even as she appreciates the need for it.

But we do see some of the broadcasts Panem president Snow (Donald Sutherland) makes to the citizens of the Capitol: one of them comes with the unspoken underlying suggestion that luxury such as the Capitol enjoys is its own kind of propaganda: "If we're rich, we must be right," basically, and "Comfort is its own justification." That's not what Snow says, but it's what he means. It's unsettling to realize that's not an unusual subtext to much of what we see in our world today.

This is so-called "young adult" dystopian science fiction with an unusual resonance. We see it, too, in tortured and tormented Peeta Mellark (Josh Hutcherson), Katniss' former Hunger Games partner who has been rescued from the Capitol and is now along on the propo mission — the idea is to show Snow and the Capitol citizens that Peeta has recovered from the horrendous conditioning he'd been subjected to, which forced him to denounce Katniss and the rebels — and has turned back toward the forces of good. The team is taking a huge risk in having him along: he isn't actually quite recovered, and will likely try to kill Katniss. PTSD is a big thing here... and how war impacts those who fight it has hardly ever been something that big, loud action movies have cared much about.

There are real stakes here for Katniss, and very high prices she has to pay before the rebellion she accidentally started is finally finished. It's the impact on Katniss that lingers most here. This film features some of the most breathtaking and original action sequences we've seen yet: Snow has turned the Capitol into a deadly obstacle course for the invading rebels; one character sardonically deems what they're up against as the "seventh-sixth Hunger Games." But matters of trust intimate and personal, as well as social and political, that haunt Katniss make this an emotional experience as much as an explosive one. That's perhaps the most radical thing about the way this series concludes: not with a bang, but with whispers of doubt, grief, regret and soul-searching. ♦

The Hunger Games: Mockingjay, Part 2 is not showing in any theaters in the area.