Yale’s Most Popular Class Ever: Happiness 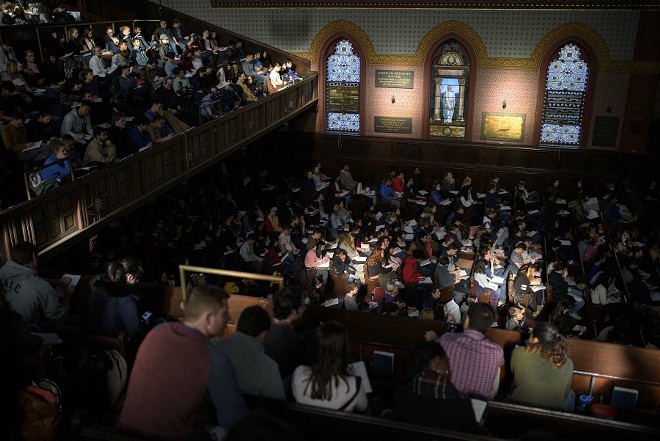 
NEW HAVEN, Conn. — On Jan. 12, a few days after registration opened at Yale for Psyc 157, Psychology and the Good Life, roughly 300 people had signed up. Within three days, the figure had more than doubled. After three more days, about 1,200 students, or nearly one-fourth of Yale undergraduates, were enrolled.


The course, taught by Laurie Santos, 42, a psychology professor and the head of one of Yale’s residential colleges, tries to teach students how to lead a happier, more satisfying life in twice-weekly lectures.

“Students want to change, to be happier themselves, and to change the culture here on campus,” Santos said in an interview.

Santos speculated that Yale students are interested in the class because, in high school, they had to deprioritize their happiness to gain admission to the school, adopting harmful life habits that have led to what she called “the mental health crises we’re seeing at places like Yale.” A 2013 report by the Yale College Council found that more than half of undergraduates sought mental health care from the university during their time at the school.

“The fact that a class like this has such large interest speaks to how tired students are of numbing their emotions — both positive and negative — so they can focus on their work, the next step, the next accomplishment,” said Alannah Maynez, 19, a freshman taking the course.

Psychology and the Good Life, with 1,182 undergraduates enrolled, stands as the most popular course in Yale’s 316-year history. The previous record-holder — Psychology and the Law— was offered in 1992 and had about 1,050 students, according to Professor Marvin Chun, the Yale College dean.

The course focuses both on positive psychology — the characteristics that allow humans to flourish, according to Santos — and behavioral change, or how to live by those lessons in real life. As their final assessment, students must conduct what Santos calls a “Hack Yo’Self Project,” a personal self-improvement project.