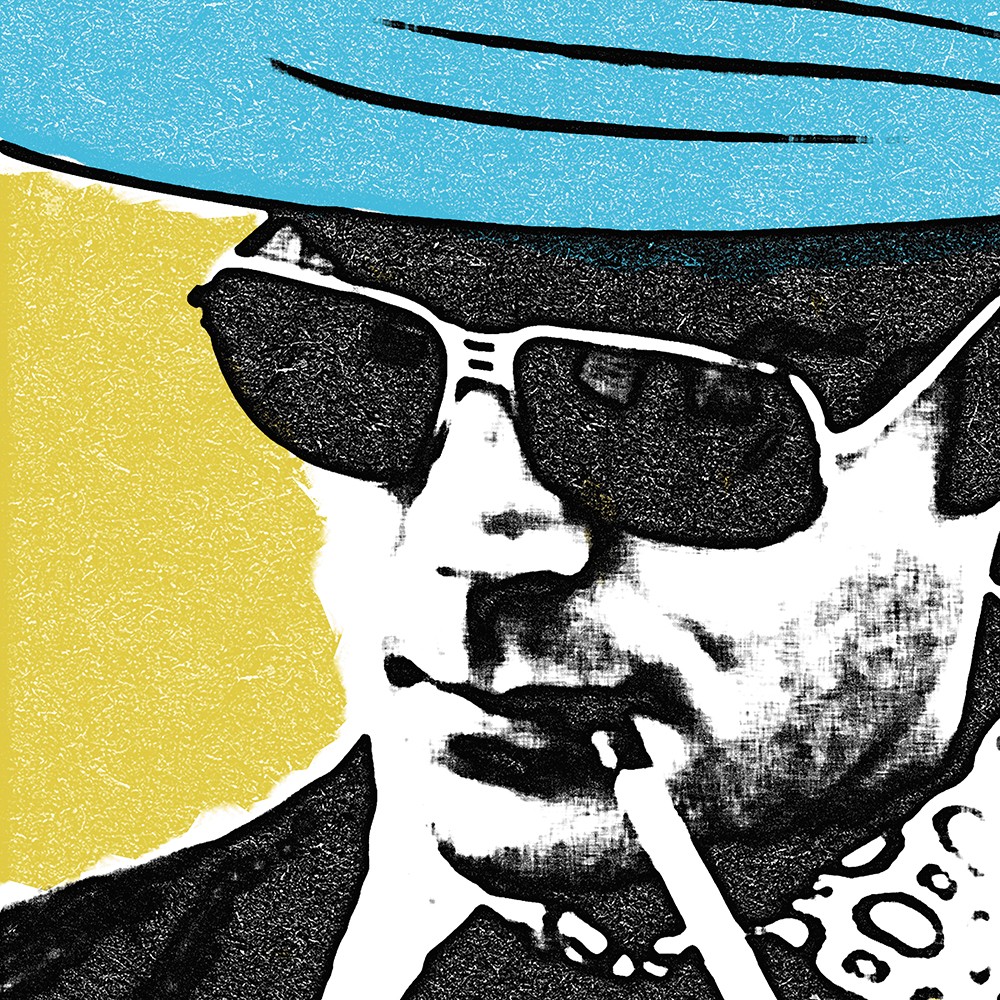 If there's any journalist whose take on politics is worth hearing now, it's Hunter S. Thompson. The legendary (and profane) author of Fear and Loathing on the Campaign Trail '72 died in 2005, so we can only guess at how he'd cover 2016. Perhaps like this...

SPOKANE, WASH. — Bernie Sanders, the Vermont senator whose populist message of Democratic socialism twice came to this former railroad town with the roaring river of the same name, is still clinging to hope of an upset. He's swinging and desperately trying to knock down his Clinton Goliath.

His effort is noble, and we can't dismiss him outright. But his supporter base — largely white, largely young, disaffected liberal misanthropes who question the value of a $40,000 liberal arts degree — has an upper limit. They can cling to 2008 and claim Obama did the same to the Clinton juggernaut, but Bernie Sanders is not Barack Obama. The former is much more radical than the latter. The latter is much more affable than the former.

Clinton is already pivoting to the general election, focusing her laser stare on Donald Trump (a stare I once saw cut through solid concrete — it was both chilling and lovely). If that's the final slate, it'll be a match made in the boardroom. Hillary and Bill famously love Donnie Boy, or at least know him much better than the rest of us. Bill and Donnie have a lot in common, after all. Their disdain for anyone who opposes them is legendary. In another universe, they'd be perfect running mates.

Make no mistake, though. Bill is no fan of a Trump presidency. Donnie Boy is obscene publicly. Billy Boy is obscene pubically. For all of his personal issues with fidelity, Bill was and is a politician who connects with people on a personally positive level. Bill no doubt echoes what the founders of Spy magazine said of Trump 25 years ago: He's a "short-fingered vulgarian."

At rallies campaigning on behalf of (not with) his wife, Bill can outstretch his arms and draw people to the stage for hugs. His appeal is to emotions.

Hillary is a policy wonk who tries but recognizes that she doesn't have Bill's personal connectedness. She sees people love Bill (and Bernie). And she sees Trump enrage supporters and detractors alike. Bill and Trump are two sides of the same coin. She must ask: "Where's the passion for me? I'm exciting, DAMMIT!"

Even the other malcontents vying for the GOP nomination get people riled up. Trump has accused Ted Cruz of being a "nasty guy," which is funny. Cruz must wonder why his nastiness hasn't siphoned off more of Trump's Flock of Philistines. The Zodiac Killer has a huge cult following, and there should be a Cult of Cruz. When he loses the nomination (and he will), he'll retreat to Texas to finish plans for a Branch Davidian 2.0 Compound where he can live out his days with a massive collection of tinfoil hats and back issues of Infowars. Were he alive, David Koresh would have a position of high power in a Cruz administration.

Trump's status is far beyond cult leader, edging on sharp-tongued revolutionary. He's William Jennings Bryan with a gold-plated chastity belt, though I assure you, there's no problem down there. (All Trump Steaks now come with Trump Chastity Belts!)

Donnie Boy has ignited a phenomenon in American politics not seen even in the time of Richard Nixon's petty bomb throwing. I covered Nixon in '72 and haven't seen anything like it. Much has been made about the "tone" of the campaign and Trump lacking a presidential way of speaking. People say they love him because he speaks his mind, not constrained by political correctness. (Indeed, what some people call being "PC" others would call simply not being an asshole.) Trump is attractive because he says what others want to but have only felt comfortable doing so behind the veil of anonymity online. Now, the veil is up, and the comments are in the open for anyone to see.

When it's over, we'll have a permanent record of nastiness. The Facebook videos will live on forever, showing people sucker-punching protesters for having the audacity to oppose Donnie Boy's latest diatribe. Trump is fine, though. He'll go back to being a billionaire and plastering his name on worthless garbage (the American Dream!). The Trump-ites will be left to look over at their neighbor, who knows all too well there used to be a Donnie Boy sign in the yard.

That's a legacy that won't fade. John knows Frank loved Trump, and he always will. Frank will remember why he loved Trump and think that John is a pussy.

It reminds me of the Nixon era. Kennedy was the pretty-boy idealist. Nixon was the shrewd dealmaker. And Nixon never got over Kennedy kicking his ass in 1960. But Nixon did get to the White House eight years later, playing on the disdain for President Johnson's Vietnam War.

In that way, Trump's chance of being president is only as big as the amount of themselves Americans see in him. ♦