Yes. The Zags can take this show on the road too 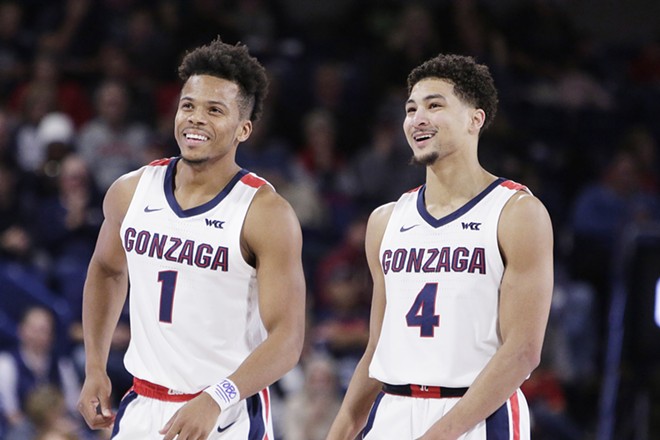 Young Kwak photo
Gonzaga guard Admon Gilder (left) and guard Ryan Woolridge on the court during the second half of a game on Nov. 1, 2019.
Gonzaga faced a challenge on Friday night in College Station, Texas, and the Zags made a statement.

Texas A&M is a high-major program from the Southeastern Conference. The Aggies have players who are bigger, stronger and better than any Gonzaga have faced this season. It was a true road game; the Zags first time away from home. After cruising to a 3-0 record by easily defeating exceptionally overmatched teams, the Texas A&M game felt like a welcome challenge.

Instead, it was no different than any of the games which came before. Gonzaga was dominant in every aspect and put together a 79-49 victory.

Before getting to the takeaways, it’s important to note that Texas A&M was picked to finish 12th in the 14-team SEC. The Aggies weren’t expected to be a good team and they certainly didn’t look like one on Friday night.

That said, this was a test and Gonzaga passed. Gonzaga proved it can take its show on the road.

After four games, the Zags rank second in the nation in offensive efficiency, averaging 1.31 points per possession. Their effective field goal percentage of 63.3 is the third best in the country. They’re sixth in scoring with an average of 95.3 points per game.

It’s one thing to put up gaudy numbers like that against teams like Alabama State or North Dakota — to score 79 points with an effective field goal percentage of 54.7 and an average of 1.11 points per possession against Texas A&M shows that the Zags early season dominance of inferior competition isn’t a mirage. The Zags are actually as good as they’ve looked.

More impressive than the numbers has been the team’s composure. With only one returning starter from last year’s team and a roster loaded with freshmen and transfers, it would have been reasonable to expect some early season struggles. By and large, there have been none.

Friday was not just the Zags first test of the season it was also an emotional minefield. Three players on Gonzaga’s roster hail from the state of Texas. They would be playing in front of friends and family against the Aggies. Starting guard Admon Gilder was playing against former teammates. Gilder transferred from Texas A&M but on Friday he led the Zags over his old team with 16 points. It was the most points Gilder has scored this season.

Ryan Woolridge, who previously played at North Texas, also scored a season-high of 16 points. Drew Timme, who was recruited by Texas A&M coach Buzz Williams while in high school in Richardson, Texas, had another solid game with 11 points and five rebounds.

Those guys stepped up as the team’s leader, junior guard Corey Kispert, had his worst game of the year with just three points. And the team’s most experienced player, senior Killian Tillie, still hasn’t even seen the floor this season as he continues to recover from knee surgery.

Gonzaga is playing as a cohesive team, and a very, very good one as well.

The Zags play University of Texas-Arlington Tuesday night at 6 pm.