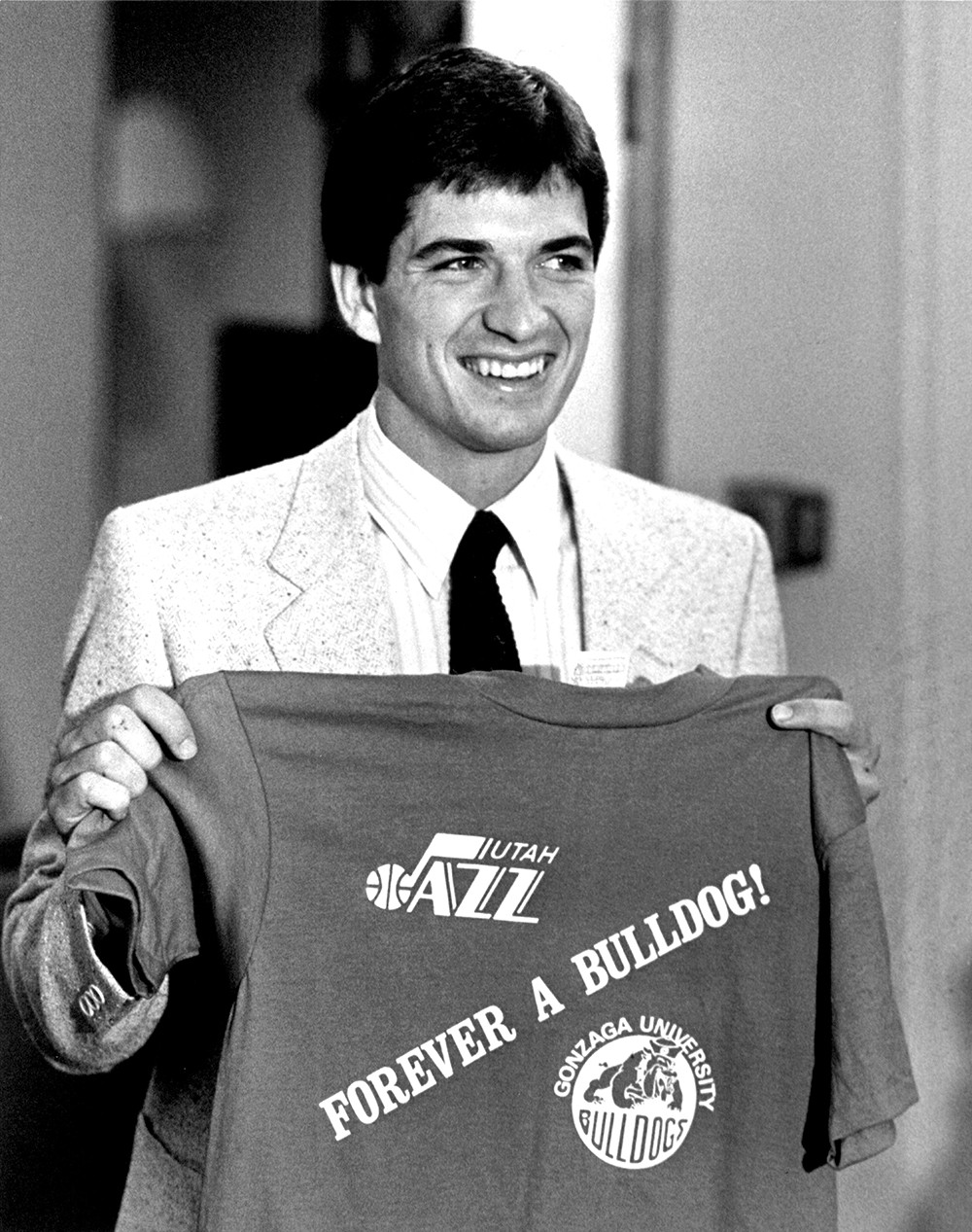 John Stockton after learning he'd been drafted by the Utah Jazz in 1984.

John Stockton is one of the most famous Spokanites of all time. But he's also kept a remarkably low profile, his main public exposure being those requisite cutaways to the stands during televised Gonzaga basketball games so an ESPN commentator can say something like, "And there's Hall of Famer John Stockton."

Even as a player, Stockton kept to himself. He was always short with the media, and even when he announced his retirement, he did so with less than two sentences while leaving the locker room. He's left his mark on Spokane, but has hardly capitalized on his fame. I mean, the guy could probably get elected mayor if he wanted.

With this in mind, the news that John Stockton had written an autobiography came as a bit of a surprise. Last week his book Assisted: An Autobiography, written with the help of childhood basketball coach and Spokane attorney Kerry L. Pickett, hit shelves, giving the first in-depth look into a life story so closely guarded as to create a mystique around the man. If anything, the book attempts to answer how someone could be this good at something and not want to tell everyone how good he is. It's the story of a reluctant hero.

For lifelong Spokanites, the book's early pages are filled with familiar, nostalgic anecdotes about growing up in the classically American mid-sized city. Even when he's writing about playing in the Olympics or hitting a last-second three-pointer in Houston that sent the Utah Jazz to the 1997 NBA Finals, things manage to come back to his dad's bar, Jack & Dan's.

Stockton tells the story of his athletic development as if it happened almost accidentally. He just happened to be good at basketball and loved to practice, he writes. When reminiscing about his high school days, he casually mentions that he broke the league scoring record his senior year. His writing is humble, almost to a fault.

In the foreword, good buddy and on-court partner Karl Malone gushes about the guy who fed him bounce passes in Salt Lake City for almost two decades. He pops up frequently in the pages, as he should — you can't have Stockton without Malone.

This isn't a shocking self-exposé by any means. Stockton was perhaps the least controversial NBA star of all time. But he does bruise his own apple a few times, mentioning how he once rigged a Campbell's soup label-gathering contest in elementary school, had to resign as an altar boy for missing a Mass and was fired from a construction job. Once Stockton crashed his dad's car, blowing out two tires and ruining two rims; he clandestinely replaced all of it with a friend, then dumped the damaged tires into the Spokane River. He didn't reveal the secret to his dad — who played a central role in his life and is a key figure in the book — for 25 years. That's about as bad as he gets.

Assisted doesn't teach us how to make those one-handed, three-quarter-court bounce passes that made Stockton a highlight-reel darling, or give us the key to shutting down Michael Jordan off the dribble. Rather, we learn a lot about Stockton's marriage, the birth of his six kids and plenty of trivia. For instance, Stockton paid $125 per month for his apartment his rookie year with the Jazz and didn't turn on the heat to save money.

Although it's more than 300 pages, Assisted is a fast read, and while there are no shocking revelations, it does address some of the questions that have surrounded the low-key white guy in short shorts (don't worry; he writes about the shorts). The most impactful chapter addresses his dislike of being famous. In fact, he hated it. And he hated that he put his wife and kids in the public spotlight. He makes a perfectly understandable case for wanting to keep a low profile, in case you've been holding that against him. ♦