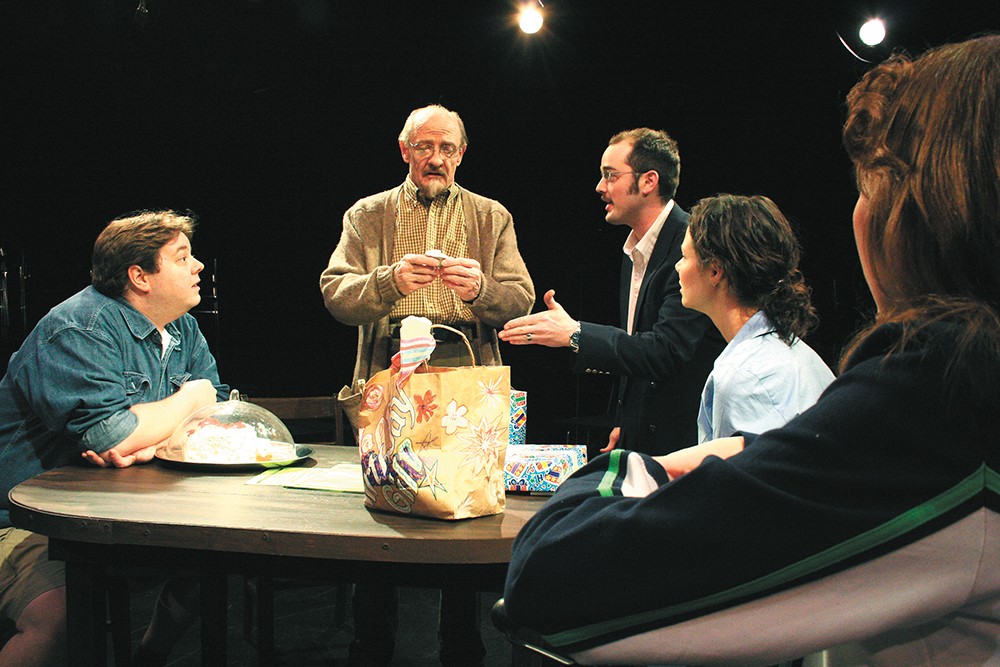 Holding On - Letting Go — part of a trilogy by playwright Bryan Harnetiaux — tackles the issue of death like Dusk (pictured) did.

For all its inevitability, death can be a tough subject to broach.

Rather than risk the awkwardness of such a sensitive issue, it's not uncommon for people — even those for whom death is palpable — to skip to lighter topics, leaving the heavy stuff for another time. Unfortunately, time is something we all run out of.

Playwright Bryan Harnetiaux took the opposite approach, choosing instead to address death directly through a trilogy of related but stand-alone plays: Vesta, Dusk and Holding On ~ Letting Go. With support and licensing through the Hospice Foundation of America, they're designed to spark the end-of-life conversations that many of us find so difficult.

The third of those plays, Holding On ~ Letting Go, is entering a three-week run at the Spokane Civic Theatre, where Harnetiaux has been a playwright in residence for decades. Like its companion plays, Holding On takes one individual facing his or her own death — in this case, Bobby Alexander, an NCAA basketball coach with end-stage liver cancer — and then uses that central character to introduce a wider network of relationships and responses to that condition.

Civic veteran Jack Delahanty is directing this production, which stars Dave Casteal (a frequent collaborator with Harnetiaux) as Bobby, A'dell Whitehead as his wife Lee, Elizabeth McAlpine as his mother, Susan Hardie as a hospice nurse, Peter Hardie as the chaplain, and Chris Jensen as a hospice social worker.

Holding On, Delahanty says, "deals more particularly [than Vesta or Dusk] about when there's a conflict, when one person in the situation is coming to some acceptance and is beginning to be at peace with the fact that he's dying. And his wife is exactly the opposite. It really deals with that piece of denial, how that happens in a family, and what that does to tear people apart, to put them at odds."

situations like that are far more universal than they might seem. Delahanty himself has seen those close to him enter end-of-life care, and he's not unique among the cast and crew in having done so.

"Everything that I've seen, somebody's going to be in denial, and it does strange things to the family. My experience is certainly not the same, in terms of the amount of time spent with people at this stage of their life — like the hospice workers, for example. But my own mother was in hospice for well over six months. I had a good friend who was with hospice, and I fortunately was able to be with him for a good part of his last months," he says.

"As director, my major concern is that I try to be true to the vision of the playwright, and what the playwright has brought to us in terms of characters and storyline. Certainly, when we've talked about 'Would it be appropriate for this or for that?' or 'Do you think this is true to life?' I've been able to talk about my experience, and so have others in the cast."

Some of that input has come from unexpected places.

"We didn't plan this way, but our stage manager happens to be a young woman who herself is a hospice social worker. And so every once in awhile, she's been able to bring some real insight into what we're doing onstage. She actually, in several instances, has helped with things like 'How do we get this patient out of the bed and into the wheelchair?' That was a real bonus for us."

In keeping with the plays' intent, Holding On is sponsored by Hospice of Spokane, which will have representatives participating in special discussion sessions on March 19 and 26, and April 2 and 6. These "talkbacks" will offer audience members the chance to speak with actors and experts about the play proper, to share their personal experiences and to ask questions about hospice care.

"We assume that a good number of the audience will be people who have either had direct dealings with this kind of end-of-life situation — friends, family — and could really use the opportunity to have some talkback about that situation."

Given its thrust and themes,

it might be easy to tag Holding On ~ Letting Go as grim. But Delahanty says the play has its share of "lighthearted moments" that offset some of the "tragedy of losing a man in his 50s to cancer."

"I think the playwright has done a pretty good job of entering some humor into it. One way that families and patients get through these kinds of experiences is with a sense of humor. The mother of the man who is dying — she's not a stand-up comic or anything, but she does bring a sense of humor to the story. There are several moments when one of the social workers is working with Bobby, and there is tension between them, but it's broken with Bobby's sense of humor," he says.

"What we're trying to do is not make it dark and morbid, but just more truthful about how difficult it is to deal with this part of living. This is not only a beautiful piece of theater, it's also an important work. This is something that every single one of us is going to face at some point. It's good to know you're not alone."♦