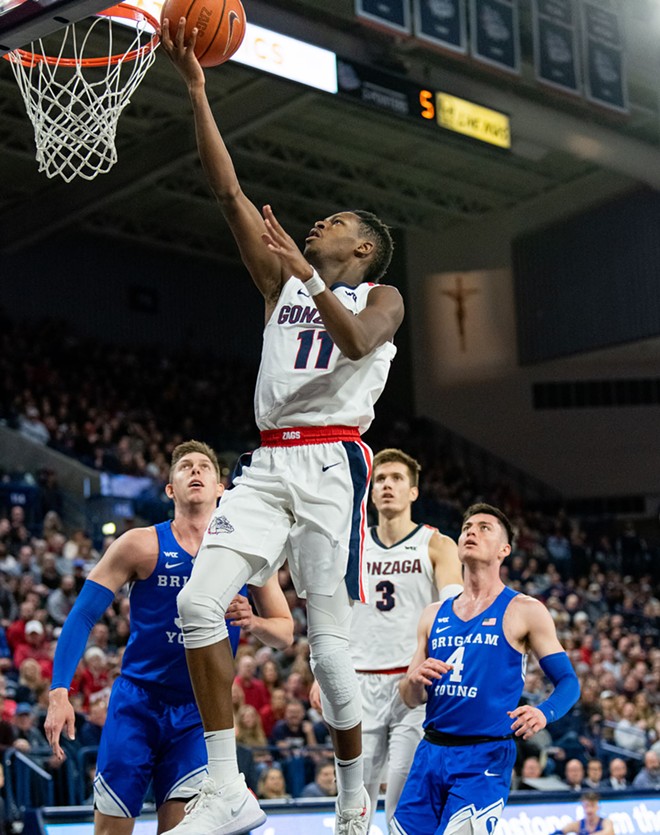 Erick Doxey
Joel Ayayi and the Zags are hitting a soft patch in their schedule.


The Zags opened the season with an absolutely brutal stretch of games. They’ve played four power conference teams, three ranked in the top 15 of the AP Poll. According to statistician Ken Pomeroy, they’ve faced the toughest slate of games of any team in the country to this point.

Gonzaga’s opponents so far — Kansas, Auburn, West Virginia and Iowa — have combined to go 25-5 this season. Auburn’s the only one of them to lose to a team other than the Zags.

That tough schedule is about to change, dramatically.

Of those teams, only No. 16-ranked Virginia looks capable of testing the Zags, and even they might not prove too much of a challenge. The Cavaliers were upset by San Francisco in their second game of the season. Then, a Kent State squad picked to finish in the bottom half of its conference took Virginia to overtime.

Since that game, way back on Dec. 4, the Cavaliers have been idle; just like Gonzaga, coronavirus issues forced the program to pause basketball activities. Unless Virginia schedules a game for the coming days, their first game back will be against the No. 1-ranked team in the country.

That said, just because the opponents aren’t as elite as the teams we’ve seen Gonzaga take down so far doesn’t mean the games won’t be worth watching. They’ll provide the Zags, and their fans, with plenty to chew on.

First up are the Northwestern State Demons who will take on the Zags twice in as many days. First Monday then again on Tuesday — in a bid to collapse from exhaustion, the Demons will then travel to Pullman for a game Wednesday against Washington State.

Those games, as well as the games against Northern Arizona and Dixie State, will also provide the first real chance for some on the Gonzaga roster to show their stuff.

Gonzaga’s freshman class of Jalen Suggs, Dominick Harris and Julian Strawther dubbed themselves the “Tricky Trio” ahead of their arrival on campus. All three were highly touted recruits who form one of the most talented recruiting classes in Gonzaga history. We’ve seen what Suggs can do, but Strawther and Harris haven’t had much of an impact. Part of that is COVID-related, as the two went into quarantine during the first week of the season. Even when they’ve been available, in part because of the caliber of teams the Zags were facing, they managed to total just five minutes each.

Same goes for sophomores Pavel Zakharov and Martynas Arlauskas, similarly rated recruits coming out of high school as Strawther and Harris. Zakharov and Arlauskas showed flashes of their ability during limited minutes last season. So far this year, they’ve each played just three. Last year they got on the court for extended stretches during blowouts. The coming days will see a few of those.

Finally, the Virginia game offers up something entirely different. As was the case a year ago, the Zags are playing fast this season. Averaging 81 possessions per game, Gonzaga rates as the most uptempo team in the country. Virginia is the complete opposite, averaging 20 fewer possessions per game than the Zags and rating as the slowest team in the country.

Forget about seeing 80-plus possessions in this one. The Cavaliers haven’t even reached the 70s since going to overtime against Texas Tech in the 2019 National Championship — oh yeah, Virginia is still technically the reigning national champion.

While they don’t look anywhere near as good as they did two years ago, they’re a disciplined defensive team that will be unlike anything Gonzaga’s seen this season. Can Gonzaga speed them up, or at least find a way to outscore them in a low-possession game? Or will Virginia’s slow-as-molasses pace muck up the Zags scoring attack? These are important questions, because arch-rival Saint Mary’s plays at a similarly slow pace and has tripped up the Zags in recent seasons as a result.

Sure, after a month of marquee matchups on national television, it’s largely back to regional broadcasts of teams you’ve never heard of. Still, there’s plenty of reasons to watch.

The Zags will face Northwestern State twice in a row, on the 21st and 22nd, with both games scheduled to tip at 6 p.m. (KHQ/ROOT). Then they’ll travel to Fort Worth, Texas to take on No. 16 Virginia for a Saturday matinee at 1 p.m. (CBS).