Hoopfest is bringing together some of your favorite Gonzaga alums 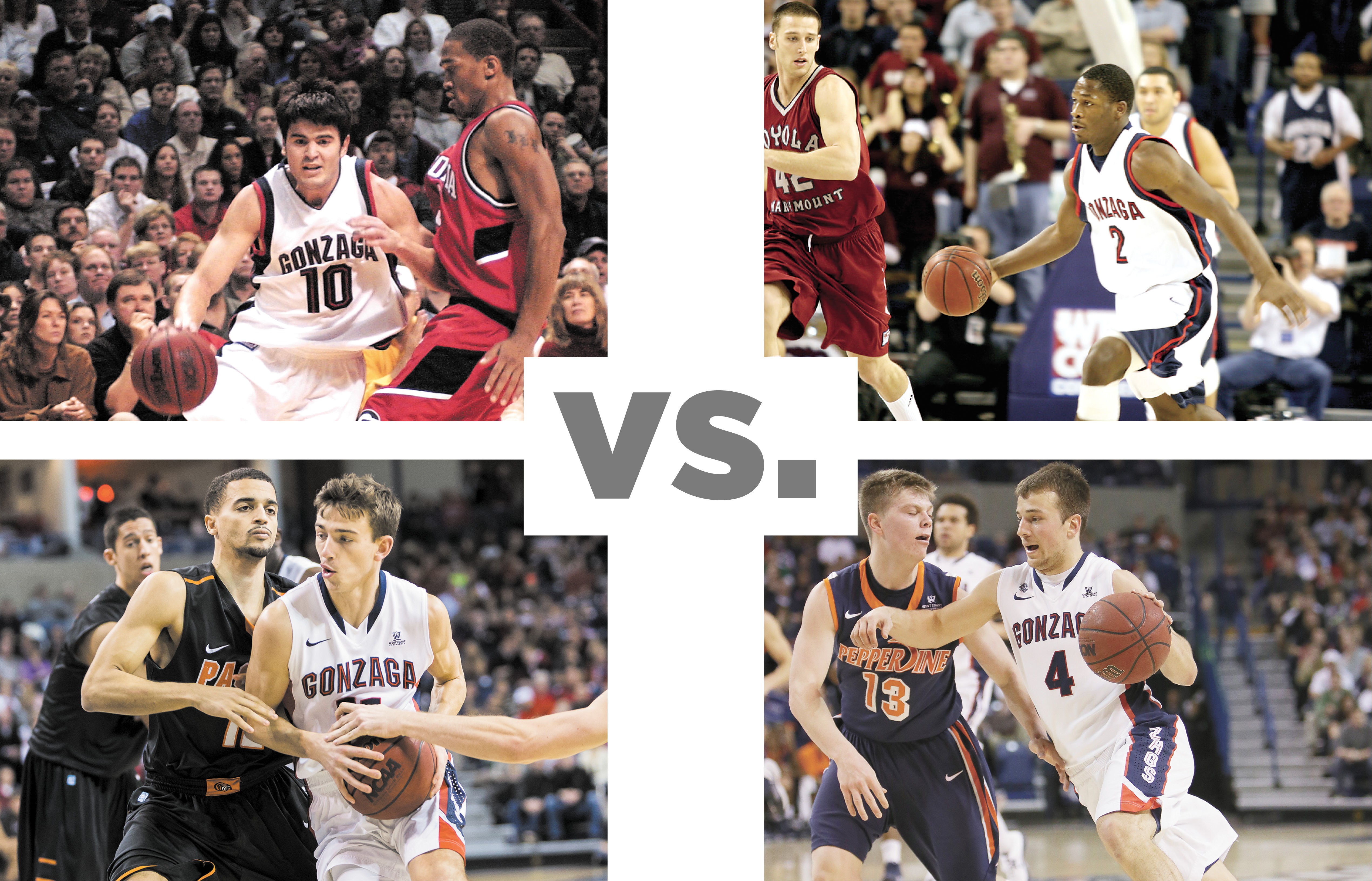 CLOCKWISE FROM TOP LEFT: Blake Stepp, Jeremy Pargo, Kevin Pangos and David Stockton will all be on hand for Friday's Gonzaga alumni game.

Mark Few has a lot to be proud of

when it comes to the Gonzaga men's basketball program. After all, the longtime head coach has won more games that just about any other coach in the college game since he took the reins in 1999. He's said that one of the things that hits home for him is that his former players keep close ties with the program. Many have even made Spokane home after their professional basketball careers came to an end.

While the Gonzaga campus is often host to pickup games featuring a who's who of Zags from the past two decades, there's never been an official reunion for former players. Former standout guard Jeremy Pargo, who's drifted in and out of the NBA over the past few years while putting up big numbers overseas, decided to help change that. His idea for an official alumni game got a boost from Hoopfest and its executive director Matt Santangelo, another former Zag.

"It's been a fun brotherhood that we have," says Santangelo. "We want to paint the picture of what we do as an alumni group. I think it will be a fun night, but I think there's going to be a real basketball game out there."

Pargo is heading up one of the teams; former All-American Dan Dickau, who decided to settle his family in Spokane after his NBA career came to a close and has since embarked on a broadcasting career, heads up the other. The two captains picked their 10-man teams during a video broadcast, and they turned out a couple of talented rosters for the game, which benefits the Boys and Girls Club of Spokane and Hoopfest's collaboration with Spokane Public Schools, called Ignite.

The talent on the floor is a mix of familiar names from recent years, including Kevin Pangos, Kyle Dranginis and David Stockton, but there are some other names from a bit before that, like Erroll Knight, Derek Raivio and Steven Gray from the mid-2000s. Going back farther, there's sharpshooter Blake Stepp and his reliable big men Cory Violette and Zach Gourde, the latter of whom began the Zags' tradition of excellent hairstyles. Then there are some guys you can credit with starting Gonzaga's 18-season NCAA Tournament streak — Casey Calvary (of backboard-breaking fame), Ryan Floyd, Mike Nilson and Alex Hernandez.

Dickau stresses that this isn't an old-timers game. Pretty much everyone can still ball, he insists. Even the older names on the roster have made waves as part of a Spokane Club team that has, at times, been one of the country's best club teams.

"I think a lot of it is a chance for fans to see Jeremy Pargo or Austin Daye again. They're able to see Santangelo and myself around town and on TV or radio, but guys like Micah Downs have only gotten better since their time at Gonzaga, and people will see that [at the game]," he says.

As if serving as the head of the world's biggest three-on-three basketball tournament wasn't enough on Santangelo's plate, he and his team also took on the challenge of creating a mini-basketball stadium from scratch at the Spokane Convention Center. Unsure of the sort of response they'll get in the inaugural year, Santangelo and company didn't want to hold the alumni game in the Spokane Arena and have it feel empty.

"You don't want to go to the Arena and have it not feel as if there's enough energy in there," says Santangelo.

Instead, the Convention Center offers what's expected to be a capacity 2,000-person crowd, who will be close to the action. Hoopfest had to borrow a playing surface from a volleyball tournament and got Sport Court to provide a professional-style overlay. Whitworth University is providing two regulation hoops.

Dickau and Pargo are using this alumni game and the days surrounding it for another purpose. They're hoping to tune up the squad they entered into the Basketball Tournament, a nationwide contest of elite teams competing for a $2 million grand prize. Last year, the Basketball Tournament featured more than 60 former NBA players; at least one, 35-year-old Dahntay Jones, played his way back into the league and won an NBA title this week with the Cleveland Cavaliers. Dickau says the tournament reached out to him about putting together a team, which is how Few Good Men came to be.

"They asked me if I had any interest in putting together a Gonzaga-based team. My first call was to Blake [Stepp], and I basically just said, 'Hey, Blake, have you heard of this tournament?'" says Dickau with a laugh. "We wanted a mix of the younger crew that's playing pro and some older guys who still want to play."

The team, which has attracted national attention, including from ESPN commentators who think they could take home the grand prize, heads down to Los Angeles for the opening of the West Regional on July 9. The roster features three players with NBA experience: Dickau, Pargo and Daye. Then there's Calvary, Stepp, Downs, Ira Brown and Mike Hart. They rounded out the team with two non-Gonzaga guys: Justin Burrell, who played for St. John's, and Missouri's Leo Lyons.

Few Good Men will play some pickup games and fine-tune their offensive sets in workouts before the alumni game, and you can expect them to pump up the intensity during Friday night's contest to get in game shape, Dickau says.

For Santangelo, putting together a formal gathering of Gonzaga alums is a no-brainer for Hoopfest, even if it took a little extra work to achieve. Even alumni who aren't able to play, for whatever reason, will be on hand, Santangelo says. One of them might even take your ticket as you enter.

"You need to take advantage of all the energy that's in the city when Hoopfest is happening," says Santangelo. "This also ties in to the success of Gonzaga University, and all that they've accomplished." ♦