Zags consistencies wear out another opponent 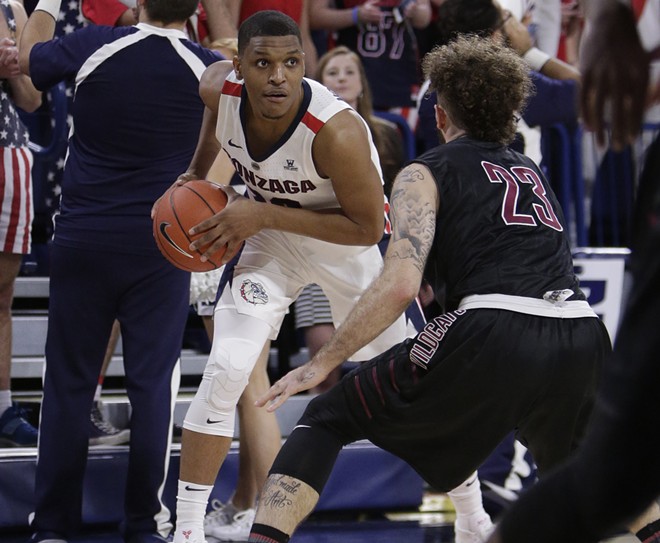 Saturday’s game highlighted everything that makes Gonzaga one of the best teams in college basketball and a favorite to go deep in March.

Their frontcourt combination of Rui Hachimura and Brandon Clarke showcased the team's highly efficient steady hand on offense that raises the team’s floor and ability to weather any opponent’s offensive barrage.

Zach Norvell responded to a rough first half with a second-half 23 points that he seems to always churn out. And Josh Perkins rattled off the basketball quarterbacking game that only confirmed him as one of the best point guards in college basketball.

Hachimura and Clarke were pretty much the sole reason the Zags were able to stay in the game as Creighton went unconscious in the first half from three. Both recorded a double-double with Clarke’s 27 points and 10 rebounds and Hachimura’s 22 points and 11 rebounds. Perhaps most impressive is that they did so while shooting 69 percent.

There is a pretty big offensive burden right now on Zach Norvell. He’s attempted over 38 percent of the team’s three-point attempts, as Perkins has made a concerted effort to focus on getting other guys looks, and the other major perimeter threat, Killian Tillie, remains unavailable with a foot injury.

Norvell is the de facto option for guard-instigated scoring plays and that sometimes leads to first halves like Saturday’s, where he had five points off of 2-8 shooting. But the Chicago guard isn’t nicknamed “Microwave” for nothing, as he responded with a 7-13 shooting that included five three-pointers and 23 points. The dude scored 18 of those points in the first 10 minutes and 38 seconds of the second half. He did so while making absurd step-back moves for separation. Give credit to Hachimura and Clarke for forcing defenses to defend the paint, but it’s not like Norvell isn’t a priority in the practice walkthroughs earlier in the week.

There is nothing more enjoyable for me than watching Norvell respond to rough stretches. He’ll pursue a shot when he’s 0-10 like he would if he were 10-10, and that’s just simply not the mentality of a lot of college players. And his heat-checks seldom seem out of the team’s game plan or system.

And when Norvell is locked-in, look out. His offensive bursts seem to only energize his defense and transition play further, as he looks for ways to force even further opportunities.

Perkins holds the most assists (69) in Division I going into Monday, with one less game played than anyone within 10 assists. He’s done so without raising his turnover ratio from the 2.1 turnovers per game he was averaging last year.

What will be interesting going through the remainder of Gonzaga’s two-week odyssey through their toughest stretch of games will be how Gonzaga handles resting Perkins as they take on a pesky, albeit inconsistent Washington, neutral floor matchup against a Top 10 Tennessee and Chapel Hill visit against an extremely talented North Carolina looking to get right after getting shown up by a great Michigan team.

Gonzaga looked lost during the four minutes Perkins rested against Creighton. The Bluejays simply dropped Greg Foster Jr.’s defender into passing lanes whenever the freshman caught the ball around the perimeter. The freshman didn’t attempt a shot or record a stat outside of a lone turnover. And in the four minutes without Perkins, the Zags only scored four points.

Few and company will need to find a way to be creative in getting Perkins rest, perhaps including rotations where Norvell shifts to primary ball handler.