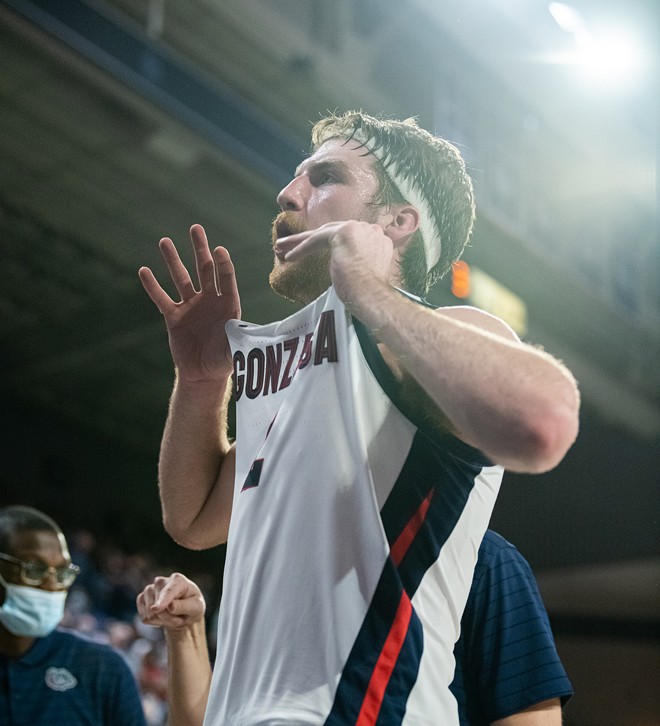 First, the Dons are a legitimately good team. They’re 35th in the NET Rankings, 15-4 on the season, and have been in the "receiving votes" section of the AP Poll multiple times this season. Even after losing to the Zags on Thursday, ESPN Bracketologist Joe Lunardi had San Francisco as an 11-seed in his updated NCAA Tournament bracket projection.

Against that good team, the Zags won by 16 points, 78-62. Sure, it wasn’t the 100-plus-point performance fans had grown accustomed to, but by the time the final horn sounded it was a comprehensive victory nonetheless.

San Francisco led by 11 early on in the game and spent roughly half of the first half holding a lead on the No. 1-ranked Zags. In years past, the Dons have proven to be something of a thorn in Gonzaga’s side when the Zags travel south to San Francisco, but this game was at home in Spokane.

The second test the Zags passed was what helped them turn that first-half deficit into a comfortable second-half win: they adapted to a struggling Drew Timme.

“It wasn't fun,” Timme said after the game. “Those are shots I usually make. They didn't go in tonight.”

The junior forward, who the week prior had a stretch of making 20 consecutive shots, started this game 0-5 from the field. Two of those misses were three-point attempts, a shot he’d taken just 14 times previously this season. San Francisco’s bigs, Yauhen Massalski and Patrick Tape, were playing to take Timme out of his game. Early on it worked to perfection. Massalski and Tape would sag well off Timme when he got the ball, limiting his ability to dance around them with his fancy footwork and daring him to take wide open three pointers that he’s unlikely to make.

Without its National Player of the Year candidate in normal form, the Zags had to look elsewhere for production. Offensively, freshman forward Chet Holmgren stepped up and scored 12 of his career-high 22 points in the first half. The Zags outscored San Francisco by 21 points with Holmgren on the floor. Despite scoring just two points and playing fewer than half of the game’s possessions, number two on the team behind Holmgren in plus/minus was fellow freshman Nolan Hickman. The Zags were plus-20 over the Dons in the 32 possessions Hickman played. His defensive impact was impressive.

In one first-half sequence, Hickman blocked a Khalil Shabazz three, then blocked Shabazz’s second shot attempt. On the next play, he nearly got a finger on a Gabe Stefanini three, causing it to fall well short. The reserve point guard was all over the place defensively, helping to slow the Dons’ offense as the Zags struggled to get theirs going.

Once the Zags did get things figured out, they started to roll like they have been almost all season long. Even Timme, who looked on his way to the worst game of his career, found his stride as the rest of the team did. Timme finished with a team-high 23 points after a strong second-half performance.

In the end, it was a 16-point win. But to get there, the Zags had to reach into their deep roster to overcome adversity like they hadn’t seen in weeks.

After playing three of the top five teams in the WCC over the first two weeks of conference play, the Zags now turn their attention to the teams in the bottom half of the league. They’ll host Loyola Marymount (9-8, 2-3 WCC) on Thursday at 8 p.m., with the game televised on CBS Sports Network, before welcoming Portland (10-9, 1-3 WCC) to The Kennel on Saturday at 6 p.m. That game will air locally on KHQ and regionally on ROOT Sports. Saturday’s game will be a homecoming of sorts for Portland head coach Shantay Legans, who spent the past 12 years on staff at Eastern Washington.