There's been a lot of weird/cute/silly cat stories surfacing on the Web the past week (when has there ever not been such things circulating around the 'Net), so it made sense to present a round-up of the best cat headlines we've clicked on and squee-ed over for your enjoyment on this foggy Friday.

Also, we wanted to remind readers that we're still eagerly anticipating the arrival of more submissions for the Cat Friday Halloween Cat Photo contest. Submissions are accepted through Monday, Oct. 28, for a special Halloween edition of Cat Friday. So far, we've been very pleased with the photos of cats wearing costumes we've received so far! I'm having a hard time resisting the urge to post them right now, actually.

Now on to our fabulous cat news round-up.

Today, one of the best cat blogs out there (we admire and frequent it oh so much), Catster, posted a story about a weird new book coming out called Half-Cat: A Partial History. The soon-to-be coffee table book, successfully funded through a Kickstarter campaign, features a curated collection of photos of two-legged cats. And don't be fooled, two-legged cats are REAL, though pretty rare. Remember when we wrote about biped wonder cat Anakin?

According to one of the book's contributors, it's meant to be a tongue-in-cheek homage to the known genetic anomaly of biped cats, but it also features lots of weirdly funny Photoshopped images of cats altered to look like they only have two front legs and a short, chicken-like body with a tail. Rest assured, no cats were harmed in the making of the forthcoming book. If you want to check out more odd images that inspired the book, or pre-order a copy, visit the website for the Half-Cat Field Research Organization. 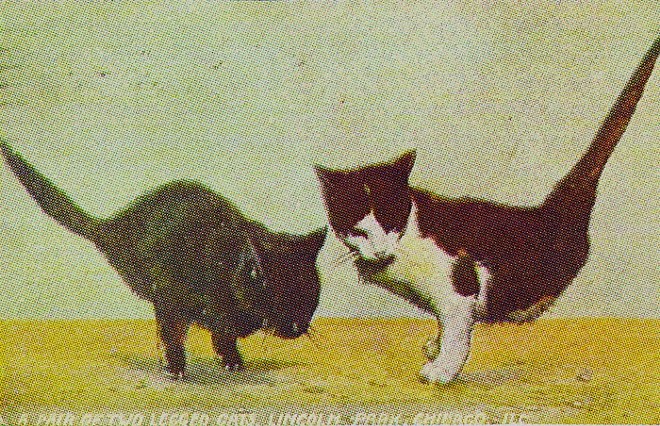 This 1909 postcard is one of the images planned to be featured in the Half-Cat book, and features real two-legged kittens born in Australia. A story about these strange kittens ran in the Pittsburgh Press on March 24, 1909.

Maybe you've already caught wind of this next news-making cat story. We certainly have seen it pop up here and there, but then again, we don't expect everyone to pay as much attention to cats on the Internet as we do.

There are at least two islands off the coast of Japan that are, literally, swarming with cats. Do a Google search for "Japan cat island" and you'll find hundreds of results about this nearly mythical place. At one time, the small fishing island of Tashirojima was dominanted by the human species, who kept cats to help control the mice population. Yet, over the past few decades, the island's human numbers have drastically declined, while the cats' numbers have exponentially multiplied from lack of being spayed or neutered. Now that word about the islands has gotten out — including through some beautiful photo series of the cats that call this paradise their home — the locations have become a cat lover tourist destination. The photo below is proof enough as to why. 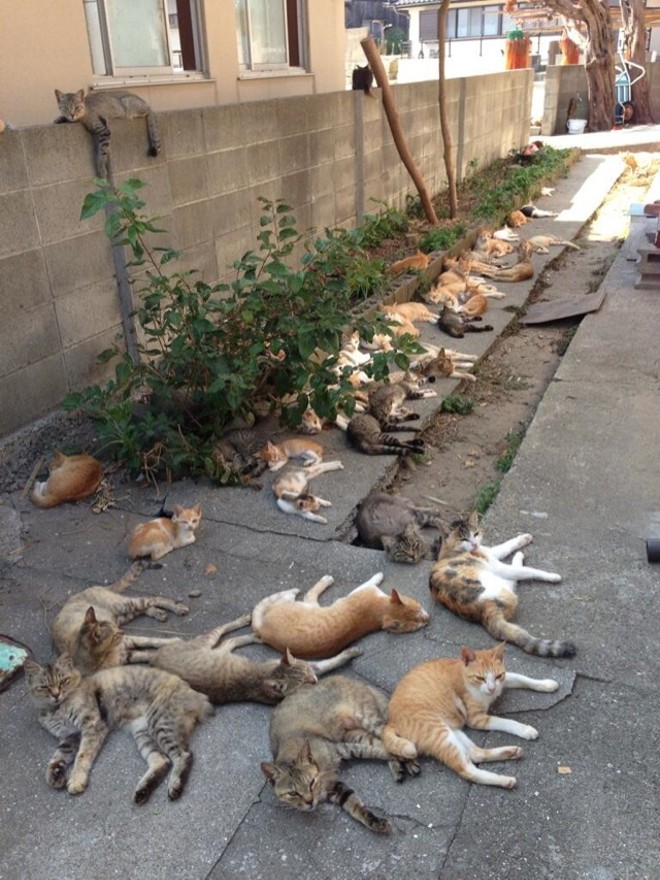