Why "Date Grape Koolaid" is worth getting upset about 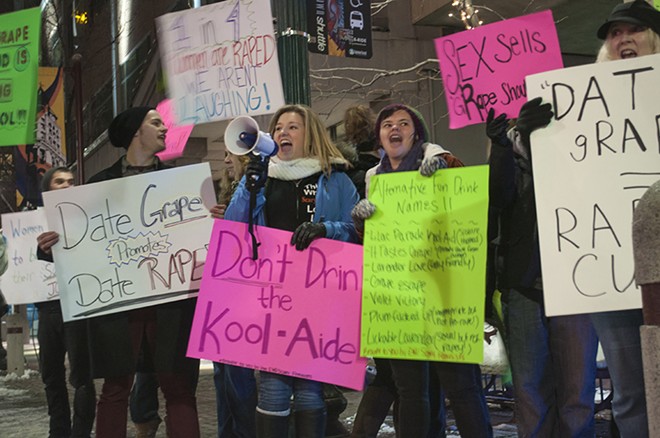 Sarah Wurtz
Protesters gather outside the Spokane Downtown Daiquiri Factory on Feb. 1 to protest the name of a drink on the menu.

A troubling issue has arisen in the past week here in Spokane. It involves a brand new bar called Downtown Spokane Daiquiri Factory that not only thought that calling one of its drinks “Date Grape Kool-Aid” was funny, but that decided to defend it in the face of over a hundred protesters and many more angry online commenters. “It’s the name of a drink … Not meant to offend,” read the bar’s Facebook page. “There is a thing called fun.” In the past week, the “date grape” controversy has become national news: from TIME, to Cosmopolitan.

Because every media professional I’ve seen write about this debate has been a middle-aged male, let me just contribute a woman’s perspective (though rape is hardly an issue exclusive to females): Rape is never fun. Rape is always offensive.

Isn’t it shocking that I feel I have to say that? That I feel that it’s important for every man reading this right now to know that rape is up there on every woman’s list of her greatest fears? That there are clearly a great deal of men and women living in Spokane who still question that a woman might have “asked for it?” That I feel I have to explain to some members of our community that rape is sexual violence?

Rape is a real issue. And there are staggering statistics that should prove to any naysayer that women aren’t just making this stuff up. The Rape, Abuse and Incest National Network estimates that every 2 minutes, an American is sexually assaulted, and that there is an average of 237,000 victims of rape or sexual assault each year.

And yes, it is just a drink. That’s the part the bar got right. And this isn’t the first time something like this has happened. Hop Valley Brewery in Springfield, Ore., called a recent beer the “Mouth Raper.” They saved a little bit of face by pulling it from shelves and issuing an apology.

But at this point, I’m not expecting Jamie Pendleton — the owner of Spokane Downtown Daiquiri Factory — to apologize. He’s failed to respond to any media’s request for comment, and continues to paint himself as a victim of online “haters.” (He also seems to think we don’t want a “hip-hop bar” in Spokane — and as the former music editor of this newspaper, I can say that’s just baseless. Spokane loves hip-hop, loves dancing: look at Irv’s any night of the weekend, look at the crowd at any local hip-hop show.) Last Wednesday night, Pendleton posted THIRTY-SEVEN terrible “grape” puns on his personal Facebook page. It was strange and sad — not unlike watching someone falling down a flight of stairs, grabbing at anything they can on the way down.

I’ve heard people say that they will protest the bar’s tasteless sense of humor by refusing to spend their money there, or that giving the Daiquiri Factory any more attention is just making the problem worse.

But you know what that sounds like to me? That sounds like saying that we women should just sit here and take it. That we should ignore one of our worst fears being dangled in our face when we’re trying to have fun. That it should be OK for a man to walk up to me at a bar and ask “wanna get date graped?” That making a stink about jokes that cause local members of our community to feel violated, threatened and reminded of terrible acts of violence that have been committed against them, is just being histrionic.

Because that’s the kind of attitude that got us to this point. It’s what makes people think it’s OK to joke about rape. It’s the cause for victim blaming, slut shaming and street harassment. Not saying anything about this issue reinforces why so many rapes go unreported.

Even more, not saying anything suggests that Spokane women’s fears of being drugged at a bar and sexually violated aren’t actually valid. It says that a bad joke that — right at the point of purchase where most date rapes start — pokes fun at my female friends who have been raped isn’t worth getting upset about.

It is the year 2014. And it’s not uptight for me, or any other woman in this city, to be offended by a very, very real problem.

Leah Sottile is an Inlander contributor and former editor and staff writer.