Music documentaries drop all the time, but comedies and dramas centered on musicians are a rarer find than a 311 fan with a GED. Probably because it’s tough to fabricate a compelling version of an already ridiculous job, and you can’t top the respective TV and movie zeniths of the genre, The Monkees (1966-68) and Josie & The Pussycats (2001).

Rock movies have set endpoints and are limited to a couple of hours, making it easy to nail a great finale. Like in the final act of Almost Famous (2000), when rock journalist William Miller’s check from Rolling Stone bounces and he’s evicted from his apartment. Related: I don’t miss rock journalism.

TV, on the other hand, has struggled to sustain rock & roll stories over multiple episodes, let alone seasons. Here are 10 music-based TV series that nearly got it right, only to be canceled after a year or two—burn fast, burn bright-ish.

Paradise City (Season 1 on Prime Video)
It’s either stupid or ballsy to produce a follow-up series to a movie nobody saw; Paradise City (a sequel to 2017’s American Satan) is both. The story follows The Relentless, an on-hiatus L.A. rock band forced to reunite for the fans and, more importantly, the money (which apparently all goes to Hot Topic). Behind the band D-R-A-M-A, there’s a ham-handed supernatural subplot about Heaven vs. Hell, making Paradise City a rock & roll fable that’s too cocksure and ambitious for its own good. Axl Rose would be proud.

Sex & Drugs & Rock & Roll (Seasons 1-2 on Hulu)
Singer Johnny Rock (Denis Leary) is a 50-something almost-was whose band broke up upon the release of their debut album in the early ’90s. When the 21-year-old daughter (Elizabeth Gillies) he never knew suddenly turns up with a proposition to reform that band, but with her as lead singer and him as the offstage songwriter, shit gets weird and hilarious. S&D&R&R gives Leary and his comic crew free reign to eviscerate modern music and pop culture right up to the “OK Boomer” edge—and the songs are great, too. 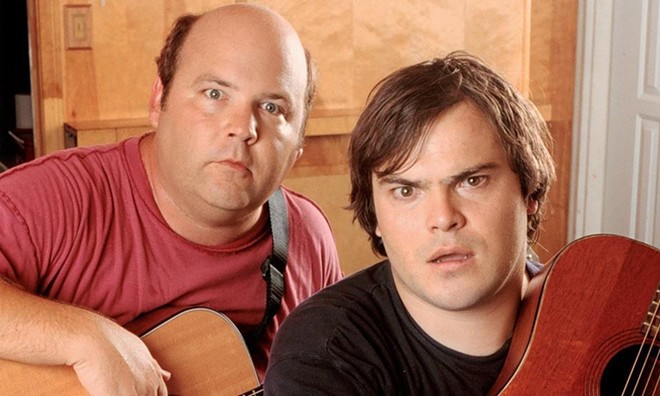 Tenacious D (the band and the show) need to be in your life.

Tenacious D (Seasons 1-3 on HBO Max)
Before Tenacious D actually became the Greatest Band on Earth in the early 2000s, they played it in this gloriously dumb 1997-2000 series. JB (Jack Black) and KG (Kyle Gass), armed only with acoustic guitars and epic delusions of grandeur, rule open-mic night at the local bar while waiting for their genius to be discovered. Between gigs, JB and KG engage in misadventures with Sasquatch, annoyed neighbors, lost guitar picks, rage-clogging, and a turd-worshipping religious cult (known today as the GOP).

Vinyl (Season 1 on HBO Max)
HBO banked big on Vinyl in 2016, believing it had a rock & roll Game of Thrones on its hands. Nope. Vinyl, part fact-based ‘70s music scene chronicle, part rock fairytale, and all cocaine-cranked swagger, bombed harder than the New York Dolls (who are hilariously portrayed here as a competent live band). Record company prez Richie (Bobby Cannavale) is out to save rock & roll, his label, and his own ass as Vinyl thrashes forth like the love child of Almost Famous and Velvet Goldmine—in other words, a wild, fast ride.

Roadies (Season 1 on Hulu)
Debuting on Showtime a couple of months after Vinyl, Cameron Crowe’s Roadies was a more earnest and laidback love letter to rock, both the business and the people. Almost too laidback: the 10-episode first (and only) season hazily follows married tour managers Bill (Luke Wilson) and Shelli (Carla Gugino) and the motley road crew of the fictional Staton-House Band, never reaching any destination. Still, the performances are fantastic, including an impressively understated turn by Colson Baker (a.k.a. Machine Gun Kelly).

The Chris Isaak Show (Seasons 1-3 on YouTube)
Never properly released on DVD or streaming, The Chris Isaak Show was Showtime’s answer to Curb Your Enthusiasm, with singer Isaak playing a fictionalized version of himself. The 2001-04 series proved Isaak to be a near-match for Larry David, but with deadpan handsomeness and spangly outfits in place of red-faced rage and dad sneakers. The Chris Isaak Show did borrow situational awkwardness from Curb, but also seasoned it with some David Lynch-ian weirdness: Chris talks to a naked mermaid only he can see.

Major Lazer (Season 1 on Hulu)
Major Lazer isn’t just Diplo’s EDM group—it’s also a splashy animated series about a Jamaican superhero with a laser-gun arm who battles evil whiteys (namely, President Whitewall and General Rubbish). Major Lazer looks like a classic ’80s cartoon filtered through an atomic bong, and the surreal storylines include “Rave Rats,” “Suckoids,” and a plot by Dr. Nerd (Andy Samberg) to steal all of the universe’s low frequencies to create one massive bass drop. No recreational drugs are required to watch Major Lazer; it’s its own high.

Yacht Rock (Season 1 on YouTube)
In 2005, web series Yacht Rock broke the internet with badly filmed and worse-acted tales of ’70s and ’80s soft-rock stars gracing the world with “smooth music”—and it’s still funny as hell. The 12-episode series jabs icons like Kenny Loggins, Toto, the Doobie Brothers, Hall & Oates, Steely Dan, the Eagles, and even Van Halen in a flurry of terrible wigs, over-the-top acting, and a boatload of improbably licensed music. Some of Yacht Rock is based in fact, but it’s best taken as seriously as a mustache finger tattoo (’member those?).