But while some may have been expecting answers to basic questions about the rollout of the newest cell phone technology, they instead heard two intensively scientific explanations about the tech that would be difficult for many without a science degree to comprehend.

Generally speaking, the messages from the current and former Washington State University professors who spoke over the 3-hour forum were polar opposites: One argued 5G is safe and may be even safer than current cell phone technology, while the other claimed it could cause a litany of health problems from autism to cancer.

WSU electrical engineering professor Robert Olsen came in on the side of the scientific community at large, explaining how radio frequencies in the range used for cell phones are safe.

He also explained why people should feel good that 5G could actually use less power than current technology. That's because some of the smaller antennas using the higher frequency radio wavelengths will be able to create a "beam" that connects a phone user to the signal and travels with them, requiring less power than spreading the signal in all directions.

Olsen uses a metaphor to explain: Imagine there's a crowd of people that you need to talk to. It's hard for the people in the back to hear you, so you have to shout, using more power, and impacting the people up front more than those who are farther away.

If you stood on a ladder (similar to how antennas are going atop power poles) and used a megaphone, you could then speak with a softer voice (using less power) and direct your comments more precisely to those in the back by going over the heads of those up front. That's similar to how some 5G will operate, Olsen says.

It's in everybody's interest to reduce the power that's transmitted, Olsen says, because it reduces interference, reduces exposure to radio frequencies, increases cell phone battery life, and reduces the power burden for the antenna or base station.

Later, Martin Pall, professor emeritus of biology and basic medical sciences at WSU, shared his view that cell phone frequencies can interfere and have been interfering with biological processes. His presentation ended with alarming and unsupported suggestions that 5G "could" have contributed to suicides in the U.K., wildfires in South Korea and even the spread of coronavirus.

Other than the potential to raise body temperature slightly, radio frequency exposure in the range used for cell phones, television and radio has not yet been linked with health issues.

Radio frequencies in that spectrum have been listed as "possibly carcinogenic" by the World Health Organization (WHO), meaning there isn't enough evidence yet to say one way or the other. That puts those frequencies in the same classification as coffee, aloe vera and other chemicals of concern (such as those that have been found in drinking water near Fairchild Air Force Base).

Some people report having "electromagnetic hypersensitivity" (including several in attendance at Thursday's event), saying their health is severely impacted by the radio frequencies and WiFi signals around them.

While the symptoms people experience are very real, WHO notes that it is not a medical diagnosis, and many double-blind studies have shown that those who claim electromagnetic hypersensitivity (EHS) could not detect electromagnetic fields (EMF) better than those who don't:


"It has been suggested that symptoms experienced by some EHS individuals might arise from environmental factors unrelated to EMF. Examples may include 'flicker' from fluorescent lights, glare and other visual problems with VDUs, and poor ergonomic design of computer workstations. Other factors that may play a role include poor indoor air quality or stress in the workplace or living environment.

"There are also some indications that these symptoms may be due to preexisting psychiatric conditions as well as stress reactions as a result of worrying about EMF health effects, rather than the EMF exposure itself."

Indeed, another study showed that just thinking WiFi was bad for you induced symptoms in participants who had a fake router placed near their head. 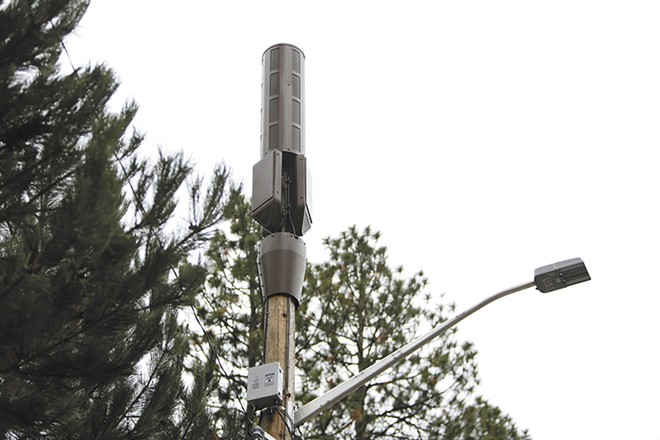 Young Kwak photo
Small 5G antennas are required every block or so for the fastest speeds with the new technology.
The crux of Pall's presentation was his theory that there is a biological means for radio frequencies to alter cell structure, namely by tricking cells into accepting more calcium than usual, in turn controlling abnormal releases of hormones and neurotransmitters. That's why he claims the technology could cause a smorgasbord of health problems, from lower fertility to Alzheimer's, and eventually create "apocalyptic" effects on human kind.

While some scientists have questioned the potential health risks of more wireless exposure, the radio frequencies used for 5G fall well within the non-ionizing radiation range of the spectrum, meaning the wavelengths can't alter your DNA like X-rays or Gamma rays.

One of Pall's claims that elicited audible gasps from the crowd was when he shared that a British ambulance company had started using 5G on one ambulance and, shortly after, three ambulance crew members died by suicide.

But look into the case and you'll find that the three men who did in fact die over 11 days in November appear to have lived half-an-hour to an hour-and-a-half away from each other. What's more, the 5G "connected ambulance" being tested in the region is still in the works, with only a series of demonstrations so far showing that ultrasounds could be done remotely in the field. While Pall couched his comments by saying he couldn't say for sure if 5G was to blame for the deaths (leaving out any mention of previous mental health issues or the men's apparently toxic work environment), he said he believed it "could" have contributed.

Pall also claimed that 5G services that were turned on about two days before the South Korean Goseong Fire of 2019 somehow contributed to its severity. The cause of that fire is still unknown but appears to have been a high-voltage power line that fell due to wind.  (Wildfires are also getting worse globally due to climate change and forest management practices.)

The Food and Drug Administration recently reviewed the last decade of studies into radio frequency exposures and found that: "To date, there is no consistent or credible scientific evidence of health problems caused by the exposure to radio frequency energy emitted by cell phones."

While cell phone usage has exploded globally over the last few decades, brain and nervous system cancer rates have actually gone down, the FDA also notes.

The Centers for Disease Control and Prevention say that there is no conclusive evidence that cell phones cause cancer, but it is being studied, and if people are worried about reducing exposure to radiation from their phones, they should consider using speakerphone more often.