The self-titled debut, from 2013, shows boundless potential, but sounds like a band finding its footing. Forest of Lost Children — 2014's sophomore effort — builds on that promise, but sometimes feels stuck in a subdued trance.

Kikagaku Moyo's international breakthrough came with 2016's House in the Tall Grass, a lovely record that found the band exploring its quieter psych-folk side and mostly leaving the heady high-wire jams in the sheath. Last year's Stone Garden EP eschewed songcraft in favor of improvisation.

Add it all up and you've got a very good catalog from one of Earth's very best psych acts, and a bunch of incredible moments scattered across several releases, but never concentrated in one place. It's like the world has known what Kikagaku Moyo is capable of for five years now — and we're still waiting for them to put it all together.

With the Oct. 5 release of the band's new album Masana Temples, that wait is over. Kikagaku Moyo's fourth full-length is confident and beautifully nuanced, but punchy in all the right places. The rock songs swagger, the band's psychedelic palette is juiced with pop sensibility and the jams don't overstay their welcome. Finally, we have an example of Kikagaku Moyo at its sustained best.

There is a reason pure satisfaction is elusive with Kikagaku Moyo: Its members are committed explorers, content to follow their muse wherever it leads rather than sit still. The Inlander was able, however, to pin them down long enough to answer a few questions via email. Here is that interview with drummer/vocalist Go Kurosawa, edited for length and clarity. 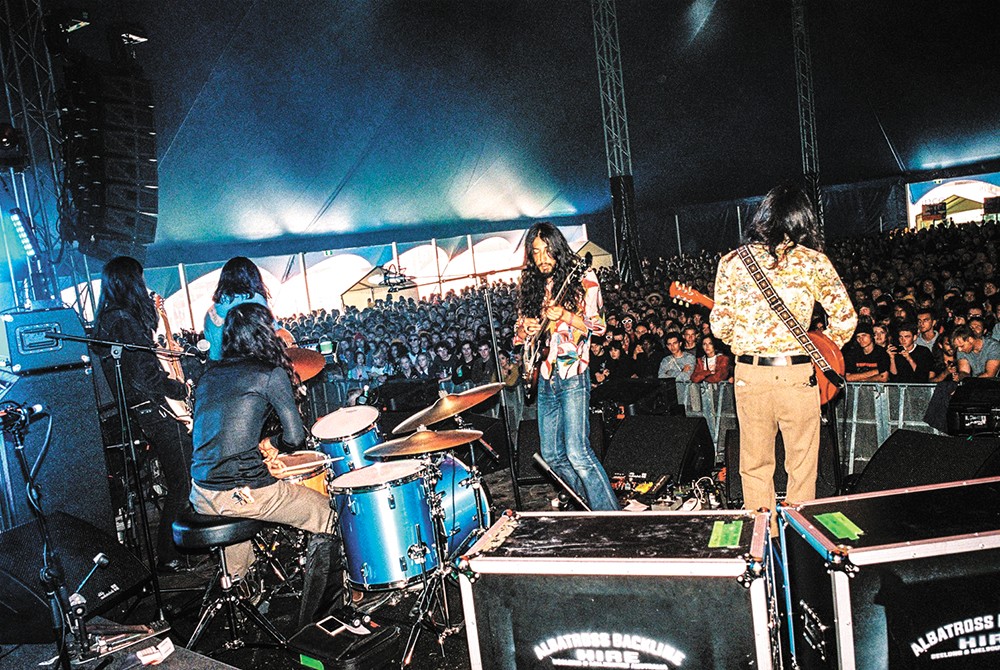 INLANDER: Earlier in the band's existence, you all lived close to each other. But before making Masana Temples, you scattered throughout the world. How did that affect your process and the songs?

GO KUROSAWA: We had less time to just jam for hours, like when we all lived in Tokyo, but we spend more time together on the road. We wrote some of the songs on the album a long time ago and they changed over time by performing them night after night at shows. For other songs, we decided to put our inspiration on a shared Dropbox, gather those ideas and compose them into songs.

You traveled to Portugal specifically to record Masana Temples with jazz adventurer Bruno Pernadas. Why him?

Given Kikagaku Moyo's growing profile, I assume you all had more time and money to spend on making Masana Temples. True or no? If so, how do you think that impacted the final product?

Well, we didn't have much time or money (this time), either. It costs a lot to go to a foreign country and book studios. We had four days to do the recording. Of course, having more money or time can be good for some musicians, but for us it's better if we have limitations. The challenge allows us to be more creative and have different ideas.

When you all talk about music, you talk less about melodies or rhythms and more about things like space, energy, vision, turning experiences into sounds and capturing feelings through song. Where do you think Kikagaku Moyo's unique methods and philosophies come from?

I have no idea, but maybe it's because we all listen to different music, and something we share is the time we spend together on the road. It's easier for us to talk about "remember how gorgeous the view was in Indonesia?" than "you know that song from this album..."

Does that way of working come naturally to the band, or is it something you have to work at to ensure everyone is communicating and creating from the same page?

We enjoy the differences in one another. We sometimes say for the first song of the set, "Let's jam!" and that sets the theme. The theme could be something like the four seasons, the last American tour, or pick an old story and try to jam. It's so interesting how we have different impressions of each theme and how we express it differently.

What do you all hope people take away from your art?

We just like playing music and enjoy being on the stage sharing our muse. We really love when people are smiling and enjoying listening to our music because we can get that energy and give it back without communicating. ♦