Finding Neverland offers magic to the audience, and its young lead actress 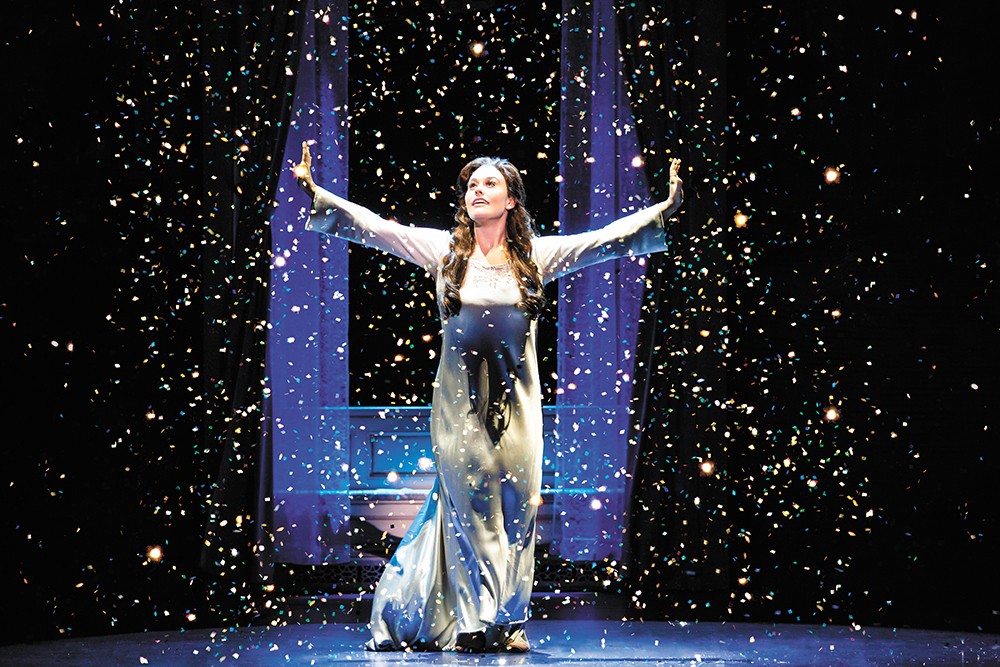 For Ruby Gibbs, landing the role of Sylvia Llewelyn Davies in the touring production of Finding Neverland is both the culmination of a lifelong dream and, hopefully, just the beginning of something special.

Just 18 months ago Gibbs was still a theater student at Elon University in her native North Carolina, where she grew up the youngest of three sisters to a single mother. Booking the gig in Finding Neverland has given Gibbs her first opportunity to see the country — she'd never been west of the Mississippi River before the play's current tour, which stops in Spokane Nov. 15-18 as the season opener of WestCoast Entertainment's Best of Broadway series. Performing a Broadway musical on stages across the U.S. is something Gibbs has fantasized about since she was a kid and got her first lead role in fifth grade.

"I remember that moment. ... The show opened with me waking up in my bed," Gibbs recalls of that long-ago role in Metaphasia, a retelling of The Twelve Dancing Princesses.

"I remember opening my eyes and not being able to see the audience, but knowing they were there, and knowing this crazy adventure was about to happen. I just fell in love with it, and I've been doing it ever since."

In Finding Neverland, Gibbs finds herself at the heart of another crazy adventure, albeit one on a much grander scale than a childhood play. The musical is based on the movie of the same name which recounted the story of how author J.M. Barrie, battling writer's block, was inspired to write Peter Pan after meeting a young widow and her four rambunctious sons. In real life, Barrie and Davies were tight friends, while the musical turns their relationship in a decidedly more romantic direction.

Young Kwak
Guests check out the grand reopening of the FIC on Nov. 5.

You might think an actress just one year out of college might be a little young to play a mother of four, but Gibbs says that she's always been cast in roles that seem beyond her years.

"I was the youngest in the class I graduated with [at Elon], but I always played the mothers," Gibbs says. "In college, you only have a range of like 18 year olds to maybe 23 year olds, so you have to pick the most maternal, and I was always the most maternal. I like to think I'm pretty mature for my age.

"It's funny because now I'm playing the mother of four young boys, but at least she's a young, hip mother. She's young and she's vibrant. It's nice to be able to sink my teeth into something that's more age appropriate."

During the pre-tour rehearsals, Gibbs spent as much time as she could getting to know her on-stage sons (and their parents) to form the kind of bond that will show up for audiences. A lot of that time was simply spent "goofing off" with the boys and sharing lunches. "Sylvia is a very silly, creative, inspiring character, and I want to bring that to these children's lives as much as I can, as Ruby as much as I do as Sylvia," Gibbs says.

Now that the show is on the road, hitting cities large and small, the less glamorous aspects of the theatrical life are part of Gibbs' reality. The actors have to fend for themselves when it comes to making hotel arrangments, finding restaurants open late after the show or grocery stores to load up on supplies, and forcing themselves to do laundry when they'd rather be napping.

The grind, though, is well worth the experience of being on stage, singing beautiful songs and delivering a story that touches audiences.

"What we hope for most of all is that everyone walks away with a smile and a feeling of hope and a reminder that you never have to lose your childlike sense of wonder and play," Gibbs says. "It's a show that tries to remind you that, no matter how bad a situation might seem, that everything is just an adventure and you have to take everything in stride. Recognize there's beauty in everything while you're on that journey."

For a young actress in her first major role, Gibbs' journey is off to a rousing start. And as she sees it, it's just the first step toward her ultimate goal in the theater.

"I am strong and powerful and bold and goofy," Gibbs says. "I would love to be that person who takes some classic roles and kind of turns them on their heads. Revamp what it means to be modern woman, a modern leading lady." ♦

For many, the first play in the Best of Broadway season will be the first opportunity to see the "new" First Interstate Center for the Arts.

Yes, that's basically just a new name for a building that's been known for years as either the Spokane Opera House or the INB Performing Arts Center. But the FIC (help me get this abbreviation to take hold, people) is actually new in many regards after the recently completed $23 million renovation.

The six-month fix-up included a complete replacement of the building's electrical system, a new backstage elevator, a revamped lobby and a new bar/lounge area for pre-show socializing.

Perhaps the most striking addition is an art piece, Opening Act by Bill and Karma Simmons, that now hangs from the ceiling of the lobby. Even if you aren't going inside the FIC, you should be able to spot that cool new addition whenever you drive or walk by the theater.

The changes don't stop at the lobby, either. Once you go inside the auditorium for the show, you'll be hearing the music from the stage via an entirely new sound system, and sitting in cushy new seats that are three inches wider than the old ones. Speaking as someone who is definitely three inches wider than I was a few years ago, that's worth every penny of the project.

See the slideshow of the FIC opening below.