Sandpoint-based Pastease has you covered in style 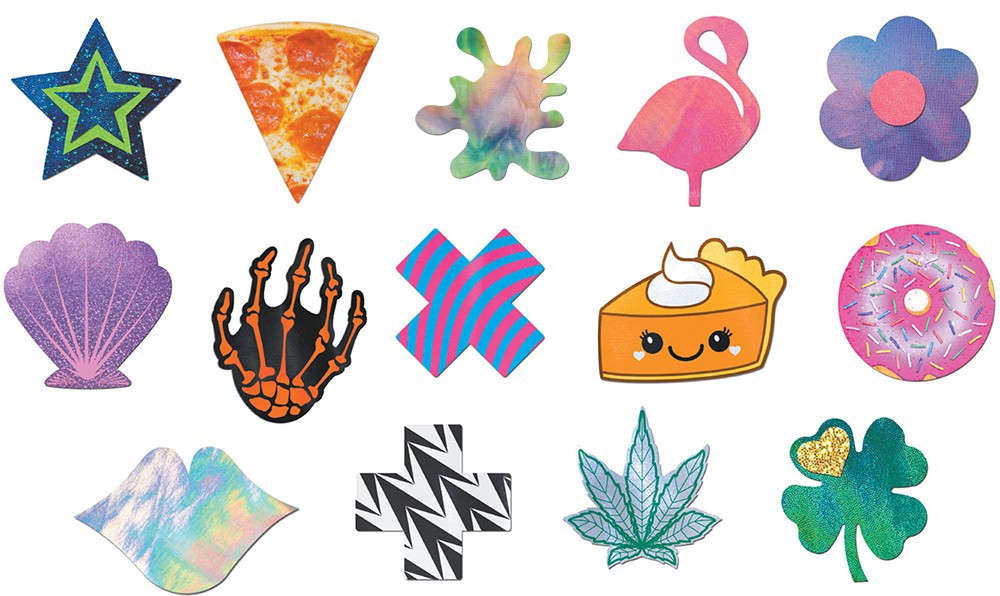 Sandpoint-based Pastease makes products that are figuratively above the law when it comes to women's right to go au naturel with their nipples.

In 2003, however, toplessness was not cool in Lake Havusa, Arizona, a popular site for spring break and nude sunbathing where Todd Prather happened to be vacationing. He noticed women were less likely to be arrested if their nipples were covered, so he developed Pastease, which continues to be popular with the festival and rave crowd.

Pastease is less about skirting decency laws, however, than it is about helping people feel good about themselves, says Prather, whose wife, Stephanie La Fleur, joined the company in 2007.

Say the word "sexy" and people think "sexual," says La Fleur. "It's confidence, fun, freedom," and if that's sexy, OK, she says, but it's not sexual.

"For the most part it's the average woman in her 20s and up," says La Fleur. Couples buy them, too, she says, recalling a man she believed to be in his 80s who phoned his order in year-after-year — a present for his significant other.

Pasties have practical applications as well. Athletes use them to prevent nipple chafing during marathons and some women use them to cover scars, says La Fleur, who designed a custom pair for a woman who'd undergone breast surgery.

"I always tell women that putting [pasties] on are the equivalent of getting a new bra and panties," she says. "It's just for you."

That doesn't mean you can't have some fun with their product. Want to get someone's attention during football season? How about pepperoni pizza pasties? Or show support for the Seahawks yourself with neon green and blue stars.

Of Pastease's 400 designs, top-sellers include four-leaf clovers, black Xs, glittery shells, skeletal hands and marijuana leaves. The skeletal hands glow in the dark, which might have you rethinking that black light from your teenage years.

Their pasties come in four sizes, because not all areolas are created equally. They use latex-free, medical-grade, waterproof adhesive designed to last up to a week when applied properly to oil-free skin. "Like a Band-Aid," says La Fleur.

Pastease also makes merkins, which they market as a covering for the pubic area. They're popular with women using them as a pantyliner or who want to go "commando," says La Fleur.

The products more or less sells themselves, say the couple, although they do some trade shows and get a marketing and sales boost from their presence on Instagram. Digital technology has been a boon to their business, allowing them to work from anywhere in the world. They chose Sandpoint.

While on a 2014 family vacation with their two children to North Idaho, the couple decided to relocate from Nevada, where they were based, and relocated the manufacturing facility to Sandpoint in July 2016.

At first they were a little leery of people's reactions but, taking a cue from their kids — unfazed about their parents' business — they've relaxed a bit. In addition to contributing to the economy — including 8 to 15 employees, depending on the season — they've gotten involved in community events. The past two years, for example, they supported Sandpoint's annual Boobs and Beer 5K Fun Run and Beer Fest, which benefits Celebrate Life and Community Cancer Services.

The only downside to the business is the occasional miscommunication about the name of the product, says La Fleur, recalling a frantic phone conversation with a woman in need of a dozen different pasties — spelled the same as Pastease' products but pronounced differently with a short "A," as in fast — for Easter dinner. ♦

Pasties, as the typically circular cover-ups are called, date to the late 1800s when female dancers throughout America pushed the boundaries of public nudity. Later, 1920s legends like the tassel-sporting Carrie Finnell mesmerized audiences with their pectoral prowess.

In addition to strategic wardrobe design, pasties allowed burlesque and other performers to skirt decency laws, which can be confusing. Topless.org describes Washington's laws governing female toplessness as "ambiguous," while Idaho, in an apparent role reversal, is more liberal regarding nipple exposure.

As one might expect, states are all over the board as to whether women's and men's nipples should receive equal treatment under the law, and a handful outright ban bare breasts.

In the U.S., numerous lawsuits citing gender discrimination and a violation of the 14th Amendment's "equal protection" clause are pending. But for those who feel the right to bare breasts is no less important than the right to bear arms, it's one more reason to consider Canada, where toplessness is totally cool.