By now, you've probably seen a lot of film critics' top 10 lists of the year, ranking cinematic masterpieces that you'll probably put in your Netflix queue and never actually get around to watching.

But amongst the least memorable of 2018's movie crop were some strange, screwy and flat-out dumb pieces of work that could make for a great night high on the couch.

The Jackass crew made their return to feature filmmaking with the story of a real 1970s theme park with dangerous rides. Johnny Knoxville goes shooting off waterslides and gets catapulted into the side of a barn, and it'll only be amusing if you're a few tokes deep.

David Tennant is woefully miscast as a serial killer who makes it his duty to ruin the life of a petty thief who discovers his secrets. Unintentional hilarity ensues, and the absurdity is ratcheted up to the point that Tennant is practically gnashing his teeth right into the camera.

The trilogy comes to a merciful close, and its final chapter could only be enjoyed as the target of weed-induced snark. It's defined by nonsensical storytelling, including a bizarre kidnapping plot detour that feels like it was taken from another movie and surgically grafted on to this one, and sex scenes with so little chemistry you'll be shouting jokes out at the screen.

This wildly miscalculated melodrama from the creator of the hit NBC drama This Is Us is so bizarre, you might think you imagined it. From its misjudged narration by Samuel L. Jackson to multiple instances of people being hit by buses to its terrible punk-rock cover of Bob Dylan's "Make You Feel My Love," this horrible, horrible movie has it all.

A movie pitting Jason Statham against a prehistoric shark should have been a lot more fun and a lot wilder than it turned out to be. That's why a little herbal assistance could make the enterprise much goofier, and a whole lot more fun. 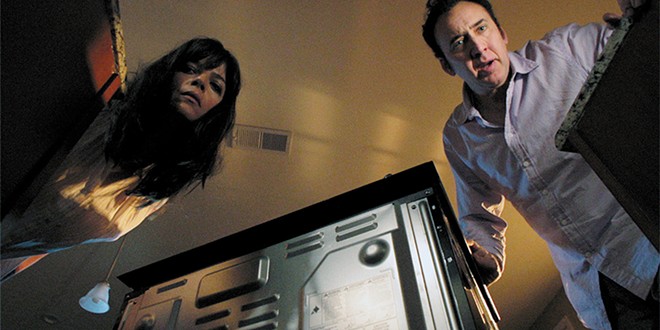 Kind of goes without saying at this point that anything with Nic Cage is toker friendly.

I genuinely liked this quick-and-dirty genre movie in which an unexplained airborne virus causes all parents to want to murder their children. But the reason it's on this list: The dad of the title is played by Nicolas Cage, who's going nuts before he's even infected. A highlight has him destroying a pool table while he screams "The Hokey Pokey" for reasons that remain unexplained.

Dwayne Johnson made two ridiculous action films in 2018: Rampage, about a super-smart ape fighting other mutant monsters, and Skyscraper, in which the Rock tries to save his family from a burning high-rise. Both are pretty fun on their own, but they'd be ever more fun if you're a bit impaired.

You'd have to be stoned out of your gourd to find this sequel even the slightest bit funny. It was written by and for the very, very high.

There are dozens of big-budget comic book movies, but few as strange as Venom. It felt like too much and not enough simultaneously, but Tom Hardy's gonzo performance would be a lot of fun to watch if you were under the influence. ♦