Following its 2015 scandal, Whitworth began addressing blackface during freshmen orientation — but could local colleges do more? 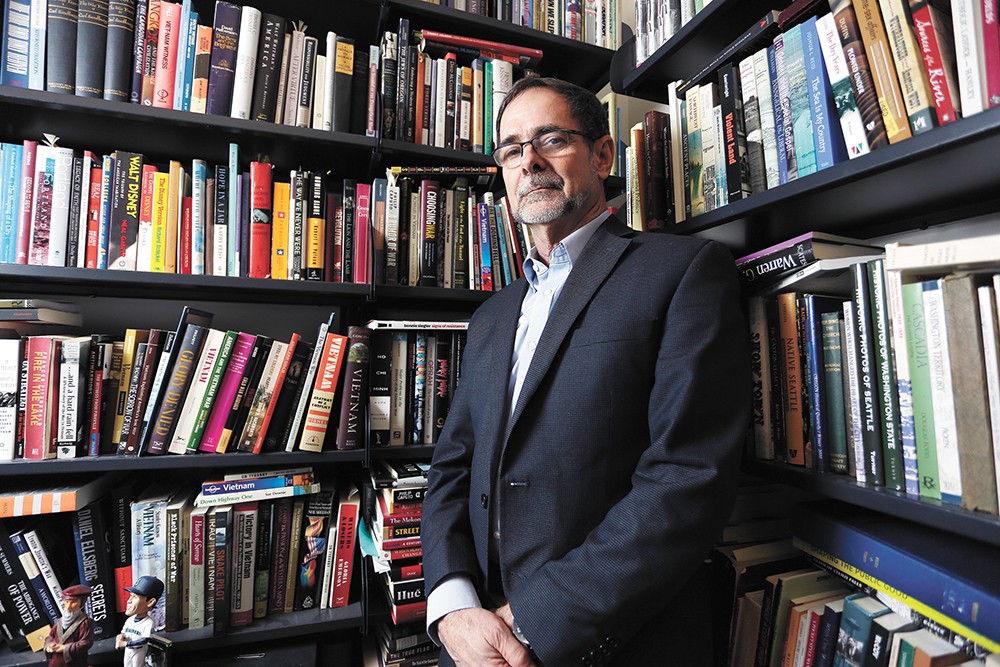 Just as Kamau Chege began his sophomore year at Whitworth University in fall of 2015, someone sent him a troubling picture. It was of five women on the Whitworth soccer team dressed in afro wigs and blackface.

Seeing blackface at his college was jarring, Chege says. Chege had spent his freshman year — during the peak of the Black Lives Matter movement — participating in protests and discussions aimed partly at creating a safer campus for black students like him. He questioned if anyone paid attention to the protests at all, and if so, why would they think this photo was OK? He decided to post it on his Facebook page. The story made national headlines, and the soccer players were suspended.

But for Chege, the university needed to do more.

"It still felt a little bit like it wasn't enough. There were statements put out, and some of it really framed it around the students' age and the fact that they apparently didn't know," Chege says. "To a lot of us, that was precisely the problem."

Dale Soden, a history professor at Whitworth, agreed. He wanted to make sure Whitworth students couldn't say "I didn't know" anymore, so he resorted to what he knows best: teaching.

Since the 2015 scandal, Soden addresses blackface specifically — and why it's offensive — on the second day of freshman orientation.

"Blackface, as I try to tell [students], has been so obviously an appeal to negative, pejorative stereotypes against African-Americans for being lazy or stupid or conniving," Soden says.

American colleges, including Whitworth, have a long history with blackface and racism. The conversation has come up again in recent weeks as the governor of Virginia, Ralph Northam, admitted he wore blackface during the 1980s in medical school. While universities like Whitworth have taken some steps to educate students about blackface, David Leonard, a professor of comparative ethnic studies and American studies at Washington State University, says the problem represents a failure of higher education.

"If we're going to respond as a society to each example of blackface, each example of a microaggression with a certain segment saying, 'Well, we didn't know. We didn't understand, we didn't know the history,'" Leonard says. "The next question is: What are we doing to educate? Are we investing in people and programs to do this work?"

In an auditorium filled with hundreds of students each year, Soden gives a 20-minute presentation on Whitworth's history. He's been doing that part for years. But after the incident in 2015, he decided he needed to add something to his presentation.

"Whitworth's history, like the history of most every college and university in the country, is one filled with pain and discomfort around race relations," Soden says, according to his script.

Whitworth, he will tell students, occasionally performed blackface minstrel shows. He says he's only found one or two photos in Whitworth's history where students wore blackface in group photos. These minstrel shows were "overtly racist," he says, and mimicked stereotypes of black people to make them feel inferior, as it was widely accepted by white students. Eventually, like other colleges, the shows at Whitworth ceased.

"But if we forget this history of racism or simply don't know about it anymore, we can unintentionally hurt others," Soden will say.

While other colleges may address blackface in different ways, Whitworth may stand out among local colleges for covering it during freshman orientation. Phil Weiler, a Washington State University spokesman, says he is "not aware" of such discussions as part of freshman orientation. Mary Joan Hahn, a Gonzaga University spokeswoman, says faculty and staff instead capture "teachable moments about blackface and cultural appropriation throughout the college experience."

"We're still working our way through understanding the depth and the extent of racism in the past."

Grade schools are reckoning with racist histories, too. Earlier this month, the Spokesman-Review reported about a photo of students in KKK robes in a 1968 Gonzaga Prep yearbook. The school says it scrubbed the photo from copies of the yearbook in its campus library and archives.

Soden doesn't directly address the 2015 scandal in his presentation because he says some of those students who wore blackface are still on campus and feel bad about the situation. But he says it's important that the history of racism is not lost — not only at Whitworth, but every college institution.

"We're still working our way through understanding the depth and the extent of racism in the past," Soden says.

When Leonard arrived to Washington State University in 2002, one of the classes he taught — Intro to Ethnic Studies — had anywhere from 35 to 50 people in the class, with more than a dozen sections.

It's the kind of class that would cover the history of blackface and racial stereotypes. Yet since he first arrived, the number of Intro to Ethnic Studies sections has fallen to only a few, which meant the class size ballooned. Last spring, Leonard had 218 students in that class. He can still teach it, he says, but it doesn't compare to the focus he can give individual students in a smaller class.

For Leonard, it's indicative of how universities have failed to invest in teaching the history of racism despite the "daily examples" of racism society sees every day. He contrasts it to how the U.S. responded to reports that it lagged behind the world in science. That was met with widespread efforts to invest in STEM (science, technology, engineering and math) education.

"Yet we see daily reminders of the realities of racism, and not only is there [a lack] of investment, but there's divestment from the very programs and people trying to make changes in the 21st century," Leonard says.

Chege, who now works at a management consulting firm in Seattle, says he's happy that Whitworth got better at talking about race and racism "more explicitly" since the 2015 scandal. Yet beyond briefly bringing up blackface during orientation, he sees other ways colleges can address the issue. One concrete step, he says, would be to integrate the conversation of race into required courses, rather than electives.

"It would be great news as an alumni to hear that talks of racial justice and the history of racial justice, the philosophy and frameworks of that, are more deeply centered in the core program," he says.

Leonard says he would like to see something similar at WSU. The university requires undergraduates to take a diversity course, but that can end up being too vague. Rather than teaching students to be literate about the history of racism, students might be taught generally about diversity and multiculturalism.

"Sadly," Leonard says, "arguments about justice and inclusion and creating a campus and society that's inclusive to others hasn't persuaded investment in these tools and teaching these histories." ♦