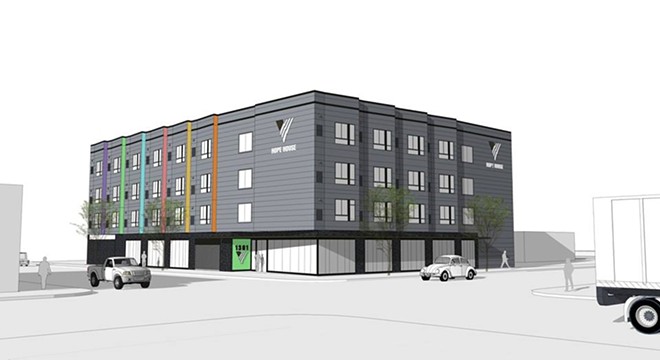 A few years ago, when Fawn Schott took over as CEO for Volunteers of America, she immediately identified a gap in services for homeless women: The Hope House women's shelter in Spokane didn't have nearly enough space to meet the need in the community.

"Knowing that at any time we have 300 homeless women on the street, we needed more beds," Schott says.

After years of trying to obtain funding, more beds are finally on the way. Volunteers of America in Eastern Washington & North Idaho says it's received the funding it needs to build "Hope House 2.0."

Construction is set to start this fall, with it being complete in fall of 2020.

Hope House 2.0, which won't end up being the final name, will triple the current capacity of emergency shelter beds, adding more than 100. Above the shelter, there will be 60 affordable housing units.

While it will not completely fill the need in Spokane, Schott says the added space — coupled with Hope House's ability to house 40 percent of women who come to stay at the shelter — will make a difference.

"We will be able to tackle the homeless problem for women at a much faster pace," she says.

Overall, the project will cost just over $15 million, she says. The state contributed $500,000 in capital seed money as part of last year's capital budget. Premera Blue Cross contributed another $1 million. The Smith-Barbieri Foundation contributed another $200,000, and VOA received another private donation of $100,000. The final piece of funding needed to get started on construction was a tax credit from the Washington State Housing Finance Commission, which VOA announced that it received last week.

The current Hope House, located at 111 W. Third, was founded more than 20 years ago to keep women off the streets of Spokane and away from violence. There are now 25 apartments for low-income women, and Hope House recently brought in respite beds for women exiting either the hospital or a mental health institution.

"What we really philosophically believe at VOA is assisting someone out of the worst day of their life," Schott says. "When they come into our services at our shelter and any other avenue, it's our goal to have a safe place and establish what they need."