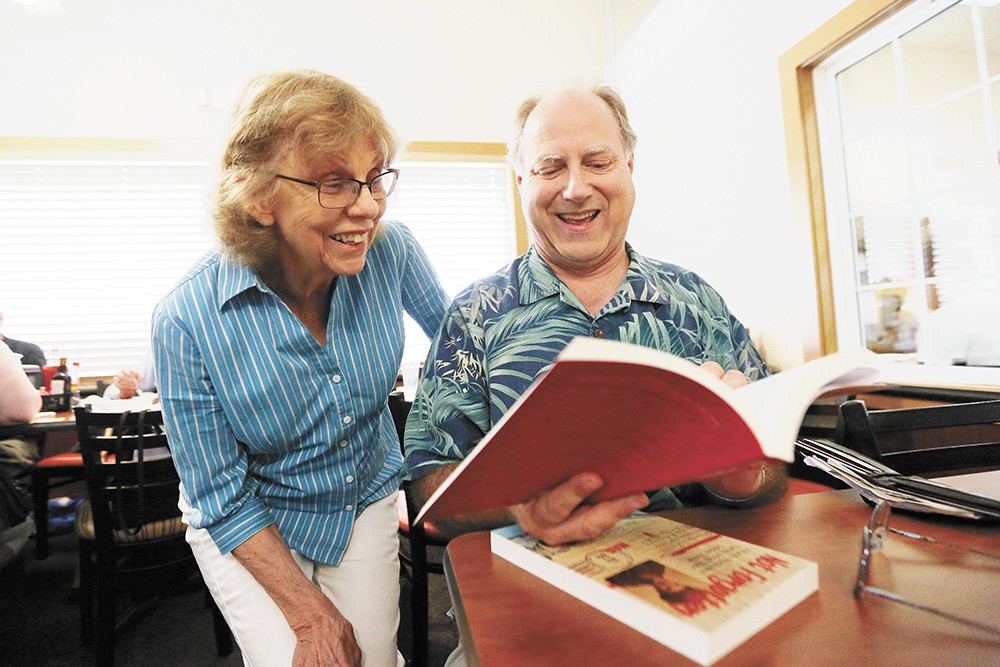 As dozens of writers finish nibbling on their Golden Corral buffet lunches one Thursday afternoon, Spokane Authors and Self-Publishers (SASP) President Jim Parry welcomes the "SASPers and SASParillas" to their monthly meeting with a pun.

"A doctor asks a nurse, 'What's the status of the girl who swallowed those coins?' The nurse says, 'There's been no change,'" Parry says, as the group chuckles.

Some of the members at this September meeting are retirees who've finished writing a book and want to learn more about self-publishing. Many others have already published some of their work and want to spread the word.

Today, the group turns its focus to Marilee Hudon, author of Waxing is Useless, which details the journey of a middle-aged soccer mom who sprouts a tail and soon learns of a protective pack of Spokane werewolves. Hudon, who also does public relations for the author group, is here to share some insights about posting to social media and building a following.

"First, we're going to talk about hashtags," Hudon says, encouraging members to create an Instagram and Twitter account if they haven't already, and regularly tag their posts with things like #writingcommunity, #bookstagram, #bookworms and more.

"The writing community is very large, and especially on Twitter, it's surprisingly helpful," she tells the room of about 30. "The best thing you can do is find an author that writes in your same genre and see how they handle their account."

This is a pretty typical meeting for SASP: Writers gather, talk about some of the elements of self-publishing and self-marketing, and importantly, they create social ties.

Similarly, the Inland Northwest Writers Guild, which meets the third Wednesday of the month at Frankie Doodle's, is aimed at offering social time and insights into the industry, with more of an aim at beginning writers, explains guild-runner Linda Bond.

For many, these larger author groups that have been around for a decade or more serve as a jumping off point to get into the local writing community. The opportunity to meet people with similar interests often leads to formation of smaller, private writing groups where there's time to share excerpts and critique each other.

"That's why I say it's more of an organization," Bond says of the guild. "I try to help people make connections so they can go on with other people, specifically in the areas they're interested in."

SASP Vice President Sue Eller says she and several other women participate in the Tin Pencils, a writing group that first started meeting at the Tinman art gallery, then, after the gallery closed, started taking turns hosting at their homes.

Twice a month, Tin Pencils authors meet with printed copies of a page or two of their writing, so everyone can mark up a copy as the author reads it aloud, Eller says. Each writer can take those critiques home and make whatever changes they'd like.

"It's actually really, really helpful. It's like having a pre-edit," Eller says. "We have become, over the years, pretty close friends, most of us."

Eller's works include, among other things, the Emily Trace Mysteries, a series of books about a detective who gets sucked into some otherworldly investigations as she tries to solve her husband's murder.

"They're set in Spokane and the surrounding area," Eller says. "It's kind of a cozy mystery with a little bit of sci-fi and a lot of humor."

While she's been an author for decades, when Eller first came on board as vice president of SASP, one of her goals was to get more speakers in front of the group who could help people through the publishing process.

"When I first started, [our speakers were] all people who'd written a book and wanted to just talk about it and promote it," Eller says. "That's nice for them, but what is it going to do for the group? We've tried to change the focus to be more proactive for everybody."

Since then, they've had everybody from professional editors to audiobook recorders to publishers come to speak on a regular basis. Sometimes members will share personal experiences using self-publishing services and warn others about the pros and cons.

In addition to SASP and the Inland Northwest Writers Guild, Eller says there are many other resources that up-and-coming writers might want to check out, including the Idaho Writer's League, which is holding a conference in Sandpoint from Sept. 19-21; Spark Central, which offers drop-in writing nights; the Spokane city and county library systems, which regularly offer writing workshops that sometimes require registration; and various closed groups that post their meeting times on Meetup, including the Spokane Fiction Writers.

"You've just gotta go to one and if it doesn't fit, see if you can find out where there are others," Eller says. ♦

Spokane Authors and Self-Publishers
Meetings: First Thursday of the month, 2:30 pm at Golden Corral, 7117 N. Division St. Show up earlier to grab a bite to eat before the meeting starts.
More info: facebook.com/SpokaneAuthors or spokaneauthors.org