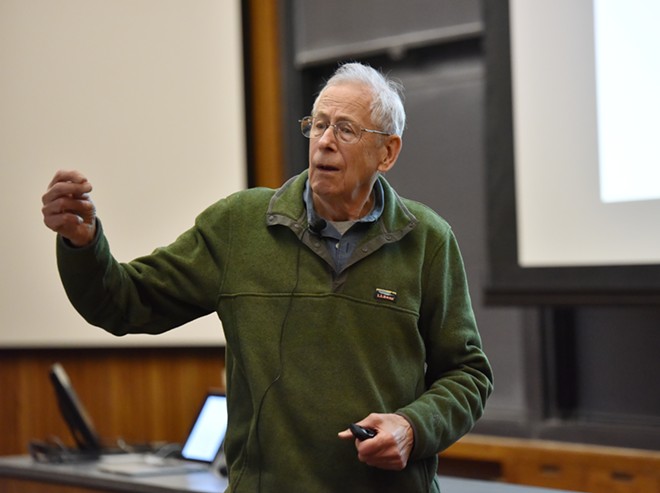 This year’s Nobel Prize in physics went to an astrophysicist who came up with sweeping ideas to explain how matter in the young universe swirled into galaxies, and to two astronomers who showed that other stars similar to the sun also possess planets.

The Royal Swedish Academy of Sciences announced on Tuesday that James Peebles, a professor emeritus at Princeton University, shared the prize — and half the prize money of more than $900,000 — for his theories that have helped explain 13.8 billion years of cosmological history.

The other half honored work by Michel Mayor and Didier Queloz, who were the first to discover a planet circling a distant sun-like star.

The two areas of research, while vastly different in scope and topic, “really, sort of tell us something very essential — existential — about our place in the universe,” said Ulf Danielsson, a member of the committee that selected the winners.

In 1964, radio astronomers discovered a background hiss of microwaves pervading the universe. Peebles and his colleagues had predicted this background radiation.

The microwave background was almost uniform in all directions, but it was not perfectly smooth. Peebles calculated that there should be faint fluctuations, and that the fluctuations would reveal regions where matter had begun to clump together — the structure that would eventually be revealed as stars, galaxies and clusters of galaxies.

The other half of this year’s physics Nobel goes to research that filled in a missing piece of the observable universe.

Queloz was a graduate student working with Mayor at the Haute-Provence Observatory in southern France. They were looking for a periodic wobble in the colors of light from a star. The gravity of a planet would pull on the star. The motion back and forth would shift the wavelengths of the starlight.

The erratic star was 51 Pegasi, similar to our sun and 51 light years away.

More than 4,000 exoplanets have been discovered in our Milky Way galaxy since Mayor and Queloz announced their results.