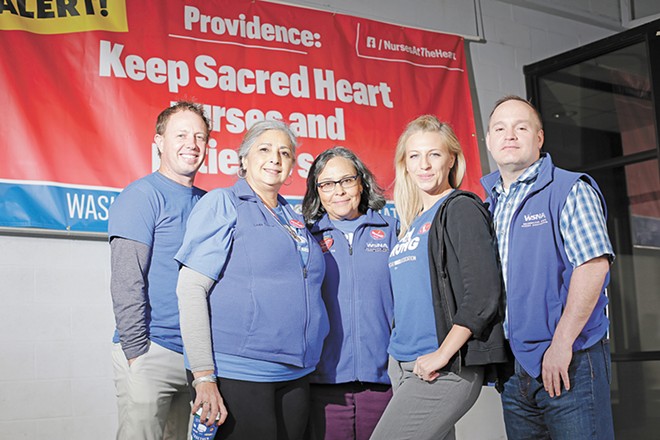 Young Kwak photo
Sacred Heart nurses and members of the negotiation team outside the union hall where employees approved a strike in October.
After over a year negotiations and recent threats of labor strikes, the union representing nurses at Sacred Heart Medical Center in Spokane and Providence, the large nonprofit that runs the hospital, have reached a tentative contract agreement.

The agreement was reportedly reached at 3 am Tuesday morning, according to a news release from the Washington State Nurses Association, the labor union that represents around 1,900 nurses at Sacred Heart Medical Center. The development comes after the union announced their intent to strike late last week, only to walk it back after "breakthroughs in mediation."

“This Tentative Agreement protects the benefits our members have earned and secures new investments in patient care and workplace safety,” says Darryl Johnson, a cardiac intensive care nurse, in a news release. “This is a major victory for Sacred Heart nurses and our entire Spokane community.”

The agreement includes "key provisions sought by nurses," including enhanced language on appropriate staffing levels and workplace violence prevention, protection of paid time off and extended illness benefits, preservation of health benefits, and wage increases of 10 percent over the duration of the contract, according to the news release.

Last October, nurses at Sacred Heart voted to authorize a potential strike, citing concerns that Providence allegedly wanted them to give up their earned paid time off and sick leave and, instead, rely in part on the state's new taxpayer-funded paid family leave program.

Members of the Washington State Nurses Association will vote on the tentative contract agreement on Jan. 16. Providence will wait to discuss contract details until after the contract is ratified, according to Semenza.

However, contract negotiations between UFCW 21 — the union representing support staff at Sacred Heart Medical Center — and Providence are ongoing, with sessions occurring Tuesday and Wednesday.