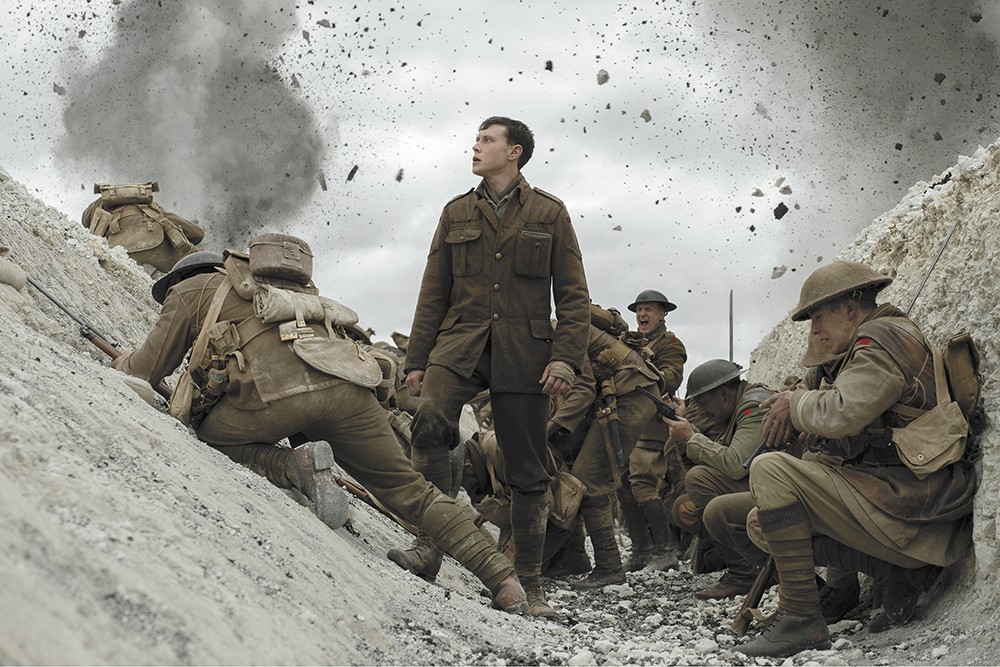 Sam Mendes' 1917, which took Best Picture and Best Director awards at the Golden Globes earlier this week, looks like a standard period piece. But one thing the ads aren't telling you: It was shot by legendary cinematographer Roger Deakins (Fargo, Blade Runner 2049) and has been designed to resemble a single, unbroken take. Think Birdman, but on the battlefield.

This approach seems fitting for a film about WWI soldiers running straight through enemy combat to deliver an important message, and long takes (either real or digitally altered) have long been used to underscore a ticking-clock narrative. But the long take can also have the opposite effect, drawing our attention to the complicated choreography of the shot rather than pulling us deeper into the story.

Some of the world's greatest directors have used long takes to up the ante of their drama — Alfred Hitchcock's stagey Rope (1948), the complex opening scene of Orson Welles' Touch of Evil (1958), the serpentine Steadicam shot through the nightclub kitchen in Martin Scorsese's GoodFellas (1990) — and Mendes seems to have picked up the torch from those masters. Before you see 1917 when it opens this weekend, consider some of these less obvious examples of filmmakers using long takes to make a point.

Children of Men (2006)
Director: Alfonso Cuarón
Cinematographer: Emmanuel Lubezki
Before winning Oscars for other long-take movies, Cuarón and Lubezki choreographed several harrowing single-shot sequences in this dystopian sci-fi masterpiece about a world's population that can't reproduce. Their camera here seems to have a mind of its own, hovering right behind the characters during an intense battle that comes to an unexpected halt, and swirling around the interior of a car as it's being swarmed by roadside marauders. The fact that it's all happening in what feels like real time brings the action to a boil. See also: The Dunkirk sequence in Joe Wright's Atonement (2007), which similarly captures the chaos of combat.

Jeanne Dielman, 23, Quai du Commerce, 1080 Bruxelles (1975)
Director: Chantal Akerman
Cinematographer: Babette Mangolte
A landmark of foreign cinema, Chantal Akerman's quotidian study of a French housewife (Delphine Seyrig) has a deceptively simple setup: The camera — often stationary and running for minutes at a time — looks on as she peels potatoes, feeds her teenage son and even entertains gentlemen callers. It might sound like the most arthouse-y arthouse movie that ever arthoused (and you wouldn't be wrong), but there's something hypnotic and ultimately otherworldly about Akerman's approach, drawing us into its protagonist's routines before upending everything entirely.

Long Day's Journey into Night (2018)
Director: Bi Gan
Cinematographer: Yao Hung-i
The real showstopper of this unusual neo-noir romance from China is its final hour, which consists of a single unbroken shot. Simulating the stream-of-consciousness, out-of-body reverie of a dream, it follows its protagonist as he rides a railroad handcart, hops onto a motorized scooter and then glides down a mountainside zipline into a provincial village. Occasionally, the camera floats 100 feet into the air before changing course and becoming earthbound again. The fact that it was originally projected in 3D makes it all the more ethereal.

One Cut of the Dead (2017)
Director: Shin'ichirô Ueda
Cinematographer: Takeshi Sone
Only read this if you haven't seen this singular horror-comedy from Japan, because it works so much better when you walk into it cold. It begins with a handheld, 37-minute take, as actors filming a zombie TV show in an abandoned nuclear test site are attacked by actual zombies. But then it's revealed that this whole thing was itself a single-shot TV broadcast, and the movie works backward to show us how the whole thing was done. It's virtuoso filmmaking that also functions as a tribute to virtuoso filmmaking.

Russian Ark (2002)
Director: Aleksandr Sokurov
Cinematographer: Tilman Büttner
In one of the most technically impressive movies ever made, we wander through St. Petersburg's Hermitage Museum as various figures from Russian history brush past one another. Shot in one 96-minute take and featuring more than 2,000 actors, the bravura nature of the project not only parallels the vastness of history, but allows different eras to blur together as the camera glides from one room to another. See also: 2015's Victoria, Sebastian Schipper's harrowing crime drama, filmed in a single take that runs for a whopping 134 minutes.

Weekend (1967)
Director: Jean-Luc Godard
Cinematographer: Raoul Coutard
As one of the architects of the French New Wave, Godard was always trying to break the conventions of filmmaking, and often self-consciously so. In his bizarre and brutal takedown of bourgeois narcissism, a road-tripping couple conspiring to murder each other is waylaid by a series of increasingly strange detours. When they encounter a traffic jam, Godard shoots it in a tracking shot that goes on and on and on for eight long minutes, and the sheer absurdity of it comes to represent all the problems of society in microcosm. Godard has made entire films that don't make their point as potently as this single unbroken shot. ♦