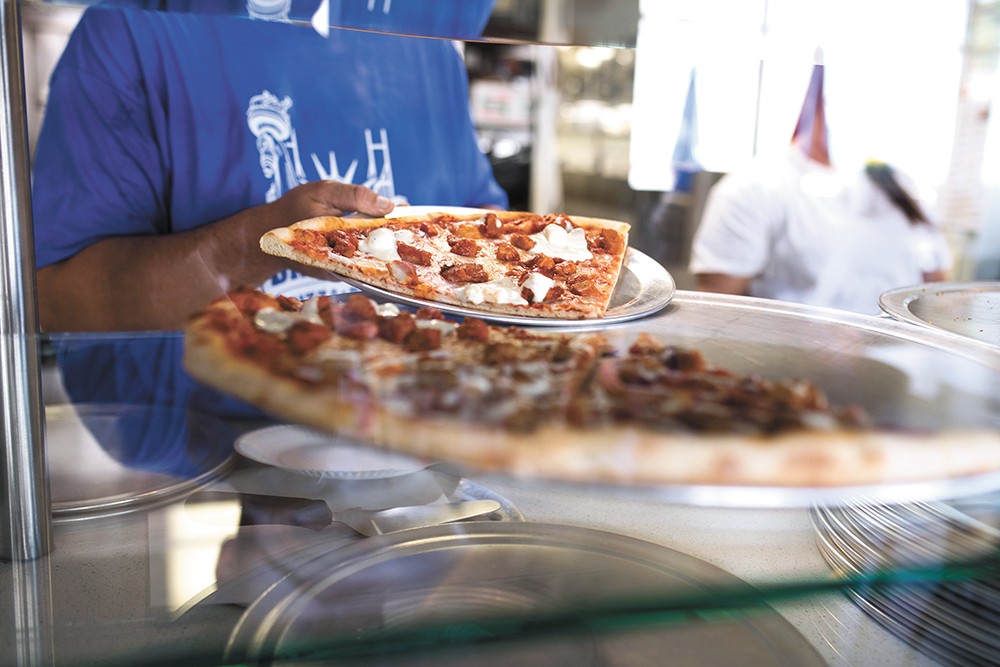 To most of us, pizza is a simple concept: bready crust, tomato sauce, cheese and whatever extra toppings you want. Get it delivered, order it to-go, grab a quick slice, heat up something frozen, or get creative in the kitchen.

Though famously born in Italy, pizza's sheer versatility has made it one of the most universally loved foods, and one that's evolved across many centuries and cultures. The first pizza, a variation of topped focaccia bread, was born in Naples, Italy, sometime in the 1700s, most experts believe. Originally, pizza and its culinary ancestors were the food of the poor.

Tomatoes — and, by default, pizza with red sauce as we know it — didn't exist in Europe, however, until Spanish conquistadors brought back the fruiting plant from South America in the 16th century. Pizza began gaining its foothold in the U.S. after World War II, as more Italian-Americans migrated west from the East Coast. Here and in cities across the world, we now find pizza just about anywhere.

There are exceptionally strict rules governing a true Neapolitan, or Naples-style, pizza. While many are familiar with its use of raw, crushed tomato sauce and fresh mozzarella cheese, an authentic Neapolitan pizza must be made with San Marzano or Pomodorino Vesuviano grape tomatoes (both native to region) and only mozzarella cheese made from the milk of cows (Fior di Latte di Agerola) or water buffalo (Mozzarella di Bufala Campana) raised in a designated locale. Pizza Napoletana must be cooked in a wood-fired stone oven, and its dough can only contain live yeast, sea salt, water and wheat flour (type 0 or 00 flour, specifically).

The traditional art of making a Naples-style pizza is considered so culturally important that it was added in 2017 to the United Nations Educational, Scientific and Cultural Organization's (UNESCO) list of "intangible cultural heritage." (To find a translation of the Italian government's own definition and process of making the pizza, visit the website of pizza oven maker Forno Bravo, fornobravo.com, and click the "cooking" tab.)

While there are no pizzerias in the Inland Northwest making Neapolitan-style pizzas to this meticulous degree (to market itself as doing so, a restaurant must be approved as a member of the Vera Pizza Napoletana Association), several serve Neapolitan-inspired pies, with characteristic thin crusts, raw tomato sauce and use of a high-heat, wood-fired oven to cook.

New York pizza, on the other hand, takes some liberties with the Neapolitan style, which it was derived from and remains very similar to, having been brought to the U.S. by Italian immigrants around the turn of the 20th century.

The main characteristics of NYC pies are a thin, hand-tossed crust, with an outer edge that's thicker and crispy, but becomes softer toward the center, allowing slices to be folded in half to eat. Slices of a NY-style pie are usually quite large, and, due to this foldable nature, are easy to eat on the go. Traditional toppings are tomato sauce (cooked instead of raw) and shredded, low-moisture mozzarella, though many creative and regional variations on toppings are acceptable.

Some argue the authenticity of an NYC-style pizza is due to minerals present in New York City's water supply, while a high-gluten bread flour distinguishes its crust. In a variation from Neapolitan pies, some New York crusts also include a little sugar and olive oil in the dough.

Unlike its thin and flat predecessors, Chicago-style pizza is characteristically hefty. Perhaps better known as deep-dish pizza, this variant is marked by its tall, pie crust-like sides that are filled with layers of cheese, meat, veggies and sauce. In deep-dish pies, toppings/fillings are added in reverse order — the sauce goes on top — to prevent the cheese from burning.

While a deep dish pizza's edges rise up 2-3 inches from the bottom of the pan it's baked in, the crust itself is still relatively thin. Oil or butter in the dough provides a buttery, biscuit-like taste to the crust.

Deep-dish pizza originated in the 1940s at Chicago's Pizzeria Uno, which still operates in a modern form. Stuffed pizza, which has a crust on top, also originated in Chicago.

There are many variations on pizza, and besides the main three variants — Neapolitan, New York and Chicago — other categories include California-style, which combines a thin crust with ingredients of regional Californian cuisine, like feta cheese, prosciutto, red pepper, chicken and salmon. California pizza rose to prominence in the 1980s, with several big-name chefs contributing to its popularity, including Ed LaDou, Alice Waters and Wolfgang Puck.

Sicilian pizza, meanwhile, is an ultra-thick, square-shaped pie, with two variations. The Italian-originating version has a spongy, breadlike base similar to focaccia, and is traditionally topped with a sauce made from tomatoes, onions, herbs and anchovies, then topped with breadcrumbs and a grated hard cheese. American spin-offs of Sicilian are square shaped, but can be topped with standard tomato sauce and shredded mozzarella.

Detroit-style pizza is also square shaped and very similar to Sicilian, but has a Chicago-inspired deep dish crust, and the sauce is also placed on top. Its thick crust is also notably crispy on the bottom. ♦