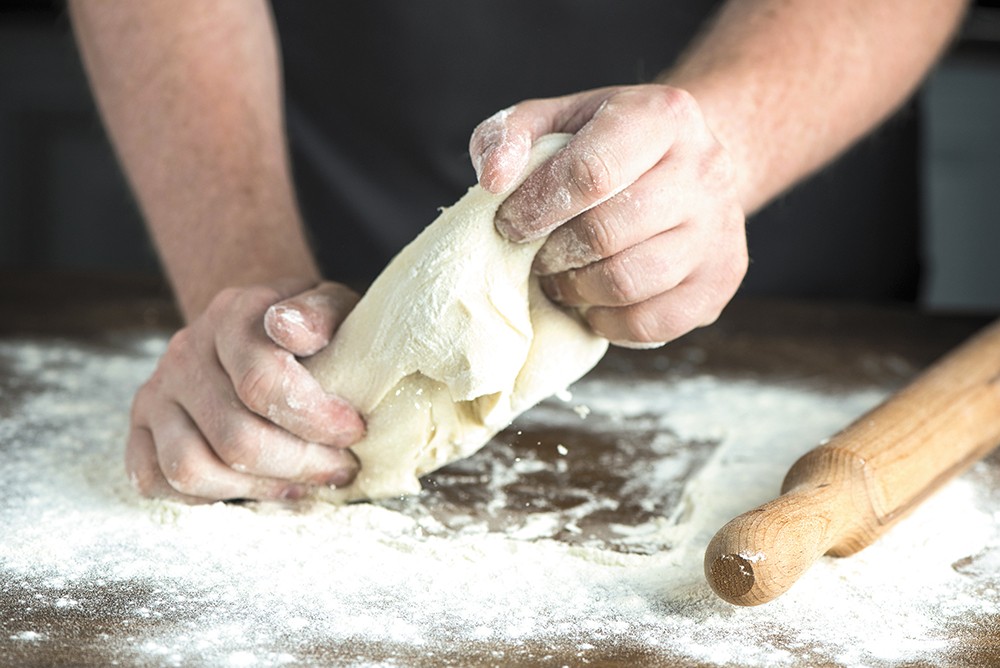 Use oil (instead of flour) on your hands when working with pizza dough.

So you want to make pizza at home but don't know where to start.

Is store-bought dough OK, or should you make your own? What about toppings — how much is too much? And how do you bake to get a nice, crispy crust without burning everything else?

For the dos and don'ts of DIY pizza, we turned to Matt and Svitlana Petersen, founders of Malvagio's, a mobile catering company specializing in wood-fired pizza, focaccia and sourdough bread.

During warmer weather, Malvagio's can be found at summer concert series in Coeur d'Alene and Bloomsday in Spokane, serving up 10-inch pies like the Popeye with artichoke, spinach, prosciutto and garlic-infused olive oil.

The couple got the idea for Malvagio's while living in California, where Matt served as operations manager for Forno Bravo, a major manufacturer of wood-fired pizza ovens. The company sells both modular and fully assembled residential and commercial ovens like the one the Petersens now use for Malvagio's.

While at Forno Bravo, Petersen was able to work with numerous high-profile chefs, like Peter Reinhart, a baking instructor and cookbook author who produces Pizza Quest on YouTube.

To perfect your own technique, Petersen recommends following experts like Reinhart, experimenting with recipes and watching other food channels on YouTube to see how it's done.

Malvagio's wood-fired oven reaches up to 800 degrees, cooking very thin dough for 60-90 seconds at most, resulting in a desirable crusty base and puffier outer rim of the pizza called cornicione in Italian. Similar results at home can be obtained by using a pizza stone and cranking up a conventional oven as high as it will go, Petersen says.

The bigger deal when it comes to make-it-yourself pizza, however, is the dough. When Malvagio's got its start, the Petersens turned to Reinhart's recipes on Pizza Quest. Malvagio's dough uses flour, olive oil, salt and cold water.

"It's not as difficult as it might seem," Matt Petersen notes.

If you do purchase store-bought dough, let it proof slowly, he advises. Malvagio's allows their dough to rise in the refrigerator for about 48 hours.

"That's how you get more of a sourdough taste," he says.

Handling the dough is Svitlana Petersen's area of expertise. She recommends oiling — not flouring — your hands to work the dough, and to work with smaller pizzas until you become comfortable with the process. A 7-ounce dough ball makes a 10-inch pizza about one-eighth of an inch thick, Matt adds.

As for sauce, Malvagio's pizza is Neapolitan style, which uses an uncooked sauce that's easy to make at home: Pureed fresh tomatoes, olive oil and basil. Lighter, thinner sauces, versus the kind you'd use with spaghetti, are better on pizza.

When it comes to toppings, the Petersens say less is more. Cook toppings ahead of time as needed — sausage, onions and mushrooms, if they're very thick — and go easy on them, since too many toppings can make a soggy pizza.

As for cheese, and until the Petersens can make their own, they like the consistency and flavor of Kirkland brand shredded mozzarella. Again, don't overload the pizza with cheese.

The couple has one final secret to making pizza at home, a cheat Svitlana does in a pinch: Coat tinfoil with olive oil, lay down a raw tortilla, top lightly with sauce, cheese, etc., and bake at 375 degrees until you can see the tortilla crisping up.

"It's probably the closest you'll get to our dough," Matt says. ♦