GOOD NEWS: These local insects never murdered anybody that we know of 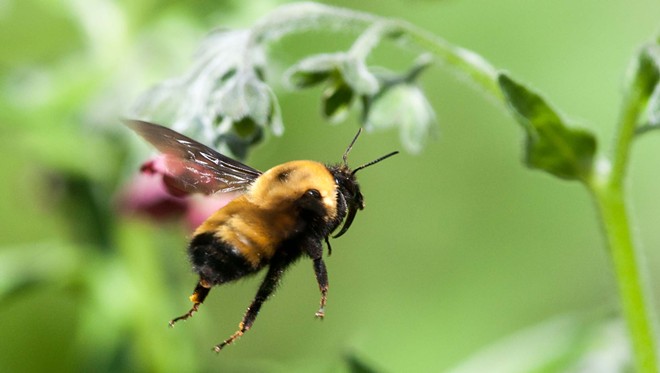 Daniel Walters photo
This bee never leans his seat back when he flies.
Last week, the New York Times dropped a terrifying story: Asian Giant Hornets, or "murder hornets" as more J. Jonah Jameson-esque researchers like to call them, have been identified in Western Washington. These insects can grow up to 2 inches long, can rip the heads off an entire hive of honeybees in a matter of hours, and have dagger-like stingers that pierce beekeeper suits to deliver a sting that sears like molten acid.

This is known as "bad news." As a result, the Washington State Department of Agriculture has gone on the offensive, seeking to destroy the incursion before it gains a greater foothold on the United States. The agency put up a "Hornet Watch" report reform for local people to send them tips and photographs of possible murder hornets. These show up on this map here.

"There were full frames of capped honey left in the hive but the bottom board was covered with nearly 2 inches of decapitated bee bodies!" a beekeeper writes in North Spokane. "I have never seen anything like this. Something ate the heads off of all of these bees!."

This was not likely to be murder hornets, a WSDA entomologist responded. But at the same time, a lot of the pictures that people sent in were innocent bees, wasps and flies that had been misidentified as murder hornets. A queen bumblebee. A paper wasp. A syrphid fly. A grit. A Jerusalem cricket.

It's a good reminder that when we use phrases like "murder hornets," a lot of innocent insects become victims of our Entomological McCarthyism. So, as local TV stations run if-it-bleeds-it-leads sensational coverage of "murder hornets," it's up to the local alt-weekly to point out that only a very small proportion of insects are murderers. Donkey Kong Country 2: Diddy Kong's Quest lied to you.

So with that in mind, we've decided to showcase the photographs of around 30 local insects who never killed anybody that we know of. These are the insects that make up our community, that make the Inland Northwest great.

Click to View 30 slides
Remember: If you see a bug or a bee or a big gross spider, before you swat give it a second thought: If you kill an innocent insect, doesn't that make you a murder human? Really, makes you think, huh?