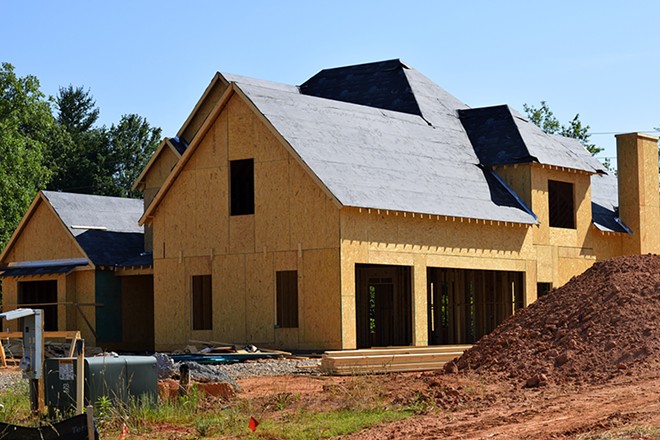 Home builders still have to follow a raft of coronavirus safety rules, including keeping 6 feet apart and wearing masks and goggles.

When spring hits, it's construction season — a boom time for contractors and laborers across the county. The specialists and tradesmen — the framers, foundation workers, drywall specialists — work twice as hard to make up for the slower winter months, says Joel White, executive officer of the Spokane Home Builders Association.

"A lot of times, they're not just working 40-hour shifts," White says. "They're working 60 hours a week with a lot of overtime."

But this year the unexpected hit: the coronavirus-triggered stay-home orders, temporarily halting most home construction.

Spokane area contractors like Corey Condron, owner of Condron Homes, were forced to walk away from projects — and give their employees bad news.

"I had to lay off half of my crew," Condron says. "About 10 projects, we had to lock the door and walk away from."

And while a Paycheck Protection Program loan meant he could rehire his employees, the future was still uncertain.

Today, the shutdown order for home construction has been lifted. But with a partial shutdown still constraining the local economy, and with unemployment still high across the state, many sectors of the economy are still suffering.

But for home builders? The construction boom resumed almost immediately.

"I thought there was going to be a slow year because of this, but it's turning to another banner year for us," Condron says. "That was a pleasant miscalculation."

Most governors in most states, including Idaho, largely left home construction alone in their stay-home orders, declaring it an essential business. But Gov. Jay Inslee — with Washington state suffering one of the country's earliest waves of the virus — banned almost all commercial and residential construction.

"There was a lot of anger in our community for the way this was handled," White says. In particular, home builders were annoyed that Inslee allowed government construction projects and low-income housing projects to continue, despite the ban.

Initially, many contractors were only allowed to complete projects if there was a safety or "spoilage" risk if abandoned — like finishing putting a roof on a house so it didn't get flooded when it rained.

The shutdown not only denied frontline construction workers the chance to get paychecks, it left some people effectively without housing.

"It's tough to have a home, sell it, buy a new home and need it to be finished, and then find yourself homeless," says Spokane County Commissioner Al French. The construction went away, but the need for construction didn't. It wasn't until April 24 — a month into the shutdown — that Inslee allowed the remaining incomplete construction projects to be finished.

It took nearly another month for Spokane County to enter Phase 2 of the state's economic reopening, allowing most new construction projects to go forward.

By then, demand had built up. A few weeks into the shutdown, Condron's phone began ringing. Even when he wasn't allowed to build new homes, he was hearing from people who wanted to reserve their spot in line.

"I started putting more sales together," Condron says. "I continued talking to new prospects during the shutdown."

As soon as Phase 2 launched, White says, most of the homebuilders in the association became so busy he was barely able to find time to reach them.

That trend has continued.

Maybe you could attribute that to the federal reserve's promise to keep interest rates low, Condron says. Or maybe, despite all of this, people still have faith in the economy.

"I think the purchasers understand this is a temporary situation," Condron says. "There's a general attitude that the market is coming back."

But even if the residential construction business is thriving, there are still plenty of roadblocks slowing down the actual home building.

During the initial stay-home order, French says, even getting an inspection for a building permit required elaborate workarounds, like having county employees conduct virtual inspections over video-chat apps. Even now, White says there's a significant delay in getting building permits approved as officials work through a backlog of paperwork.

Home builders still have to follow a raft of coronavirus safety rules, including keeping 6 feet apart and wearing masks and goggles. While those measures help protect workers, White says, they can also slow building down as a consequence — and drive up prices. And for every $1,000 price increase, he estimates, about 200 potential homebuyers are priced out of the home.

The biggest challenge, however, is finding enough skilled laborers to meet all the demand.

"The builders were scrambling for workers, just like they were before," White says.

But that's not a new issue. After the last major recession — sparked by the housing crash — gutted the housing construction industry, scores of experienced tradesmen left the profession entirely and never returned.

White says some of the construction workers laid off during the shutdown haven't come back to work yet, even though there's room for them. Maybe that's out of an abundance of caution — coronavirus is still very much a threat, particularly to older employees. But he also wonders if it's a consequence of the temporarily boosted unemployment checks, which, for some lower-wage workers, can make not working more lucrative than having a job.

"That will end July 31," White says. "So I'll be interested to see how that affects the industry come Aug. 1."

Condron, however, doubts unemployment checks are much of a factor in the labor shortage.

After all, a low supply of home builders and a high demand for housing means the construction workers who remain can charge a premium.

The question is how long the housing boom can continue when unemployment is so high.

"My feeling is that the demand side isn't very sustainable," says Jim Frank, owner of Greenstone Homes, the developer behind projects like Kendall Yards. After all, when people lose their jobs, they're less willing to take risks on building a new house. They're more willing to room together to make ends meet. That means fewer homes get built — and the downturn spreads to the construction industry. 

The home building market remains a bright spot in a dismal economic climate.

"We're blessed, we must admit that," Condron says. ♦