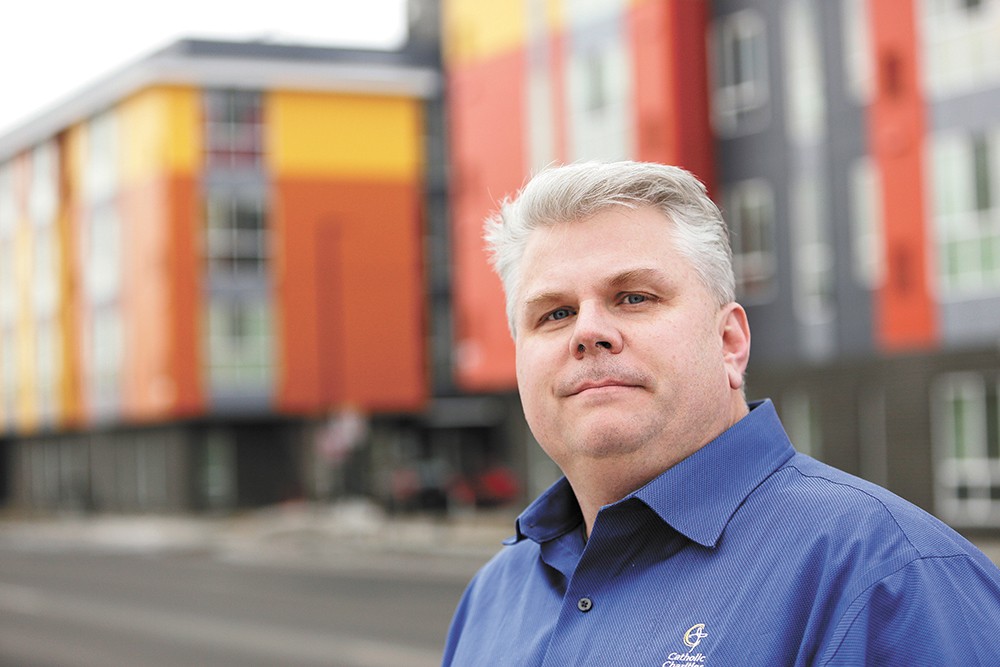 Catholic Charities of Eastern Washington CEO Rob McCann is a racist. That, at least, is how McCann described himself in a video recorded last month.

McCann endorsed the Black Lives Matter movement and embraced the concept that in a society riddled with structural inequity, even unconscious bias from White people deepens an inherently racist system. It was inescapable, he argued.

"For me, as a White person, saying 'I'm not a racist' is like saying 'a fish is not wet,'" McCann says. "In America, racism is no longer a question, but rather it's the toxic water we all swim in."

And then he applies the same logic to his own institutions.

"My Catholic Church and my Catholic Charities organization is racist," McCann says. "How could they not be? Our Catholic faith tradition was built on a tradition that a baby born in a manger in the Middle East was a White baby."

The video was intended to be a confession of sin, a plea for forgiveness, a step toward redemption and reconciliation. And some took it that way.

"I admire him for having the courage to say it," says Rev. Walter Kendricks, pastor of Morning Star Baptist Church and founder of Spokane Community Against Racism. "But I'm wondering, 'What the hell took you so long?' He was just speaking truth, man."

But to others, McCann's statement was seen not as conciliatory, but inflammatory. In a follow-up statement clarifying and apologizing for some of his remarks, McCann writes that his video had been perceived as an attack on the Catholic Church.

He stressed that the response had included "violent and hateful language directed towards Catholic Charities" and "violence committed against my wife and children at my home." He declined an interview request by the Inlander to elaborate.

McCann's comparatively measured critics included one particularly influential name: Spokane Bishop Thomas Daly. On July 5, after meeting with McCann, Daly published his own statement, criticizing both McCann's video and the Black Lives Matter movement that McCann had aligned himself with.

"When there's so much rhetoric and there's so much division and things are so charged, I found that statement, that video to be reckless," Daly tells the Inlander. "It was like adding gasoline to a fire."

It points to a fundamental question facing religious leaders of all denominations: How do they respond to the accusation that their faith has defended racism?

THE GOSPEL OF BLACK LIVES MATTER
The problem with McCann's video, Daly argues, wasn't that he confessed his own sins. It's that he also tried to confess everyone else's.

In the battle over the Catholic Church's soul, Spokane's current and former bishops fight on different sides

"When you shotgun blast everything, that just to me did not serve the mission," Daly says. "How could we have our Catholic Charities be a racist organization?"

Yet in other instances, Daly himself is willing to say controversial and divisive things when he believes that his faith calls for it. He made waves last year when he said that abortion-supporting politicians shouldn't take Communion. Daly is also willing to excoriate his own church at times, accusing prominent leaders of turning a blind eye toward sex abuse.

In fact, Daly sees the Minneapolis Police officers who stood by and watched George Floyd die as a lot like the Catholic leaders who shrugged off suspicious behavior from priests as none of their business.

"You don't do anything, you're guilty of a sin of omission," Daly says.

Yet when he discusses systemic racism, Daly sometimes tempers his condemnations with caveats. He condemns police brutality, but also brings up issues like "Black-on-Black violence in Chicago" and the impact of abortion on Black communities.

In a statement about racism in early June, he cited the 2018 letter by the U.S. Conference of Catholic Bishops that discussed institutional racism. While it said that for some minorities "interactions with police are fraught with fear and even danger," Daly noted it also said that we should "reject harsh rhetoric that belittles and dehumanizes law enforcement."

He's skeptical of McCann's discussion of "White privilege" — the notion that White skin provides an inherent advantage in American life.

"When I celebrate Mass in Hillyard and I drive past someone on the front porch of a wrecked house with a wrecked car and with tattoos and missing teeth, does he have White privilege?" Daly says. "I don't think so."

McCann explicitly endorses Black Lives Matter on his video, stating that "in its purest nonviolent form, it is a Christ-like movement."

By contrast, Daly condemns the Black Lives Matter movement for not more forcefully condemning the violence from the protesters.

"Its silence has not gone unheard," he wrote in his July 5 statement. "BLM is in conflict with Church teaching regarding marriage, family and the sanctity of life."

The website of the Black Lives Matter Global Network does stress their support for "Black queer and transgender communities" and in 2018 demanded "reproductive justice that gives us autonomy over our bodies," the stances some conservative Catholics object to.

"Either you are for equality for all people, or you're not," Kendricks says. "Straight, gay, Black, White, rich, poor, male, female, God created them all."

When the Inlander asked Daly if he agreed with the general statement that "Black lives matter," Daly wouldn't repeat the phrase. Too exclusionary, he suggested.

Kendricks agrees that all lives are sacred — but that's precisely why the Black Lives Matter movement is so vital, he says.

"You can't separate 'Black Lives Matter' from the word of God that says we were created in his image," Kendricks says. "I'm not mad at Bishop Daly. ... But I would dare say, he's missing out on something. He's missing out on the revelation and the truth of God."

IN HIS IMAGE
"Even now," McCann said in his video last month, "the Catholic Church in the United States has its own terrible history of owning slaves, staying silent about others who did the same, running Indian schools, and being part of the institutionalization of racism."

It's a history Daly acknowledges, but only to a point. He recognizes that the first African American Roman Catholic priest was rejected by every seminary he applied to and that some religious communities in Europe refused to take any candidates who were Black.

He also places blame on the more liberal Jesuit order, citing the school the "Jesuits ran, where they took Native Americans and tried to break their spirit," and the large number of slaves owned by Jesuit priests at Georgetown University.

But he also says that a major influx of Catholics in American history were poor immigrants who were themselves discriminated against.

The Catholic Church isn't just an American institution, Daly says — it's a global one. So, in particular, he was peeved at McCann's claim that the Catholic faith was built on the premise that Jesus was a White baby.

"That was not only not true, but showed an incredible lack of understanding," Daly says. "I can't explain it in words. It just struck me as stupidity."

A few years ago, he says, Patrick Baraza, the Kenyan priest who pastors at Spokane's St. Ann Parish, gave him a Nativity scene featuring a hut and an African Joseph, Mary and Jesus.

Baraza tells the Inlander that in many cultures, the portrayal of Jesus shifts to reflect the appearance of that society. The divinity, humanity and universality of Jesus is the important thing, Baraza argues — not his ethnicity.

Baraza sees McCann's video as a misstep, arguing he should have sought out Daly's wisdom before recording it. He believes that the Catholic Church's leaders shouldn't participate in the protests, but should be there offering prayer and comfort to those impacted.

"Some African wisdom: When two elephants fight, who suffers?" he asks, pointing at the lawn of the Bishop White Seminary at Gonzaga University. "The grass."

In other words, he worries that interracial conflict could hurt the most vulnerable, impacting them for generations.

BIOGRAPHY AND THEOLOGY
Beyond their faith, each leader's reaction to the Black Lives Matter movement is influenced by their own experiences.

"I remember the police pulling my dad over," Kendricks says. "I remembered the trembling from my father, being afraid of police officers. That was in the South in the early '60s. I was just a kid."

By contrast, Daly's brother was a policeman. His cousin was, too. Daly once served as the assistant chaplain for the San Francisco Police Department. He was at a funeral of a cop who committed suicide after a controversial shooting.

"This was a man who laid his life down," Daly says. "Something cracked, I think because of the strain."

And so Daly acknowledges that those experiences make him more sympathetic to the "law and order" worldview.

"Good cops, like good priests, still believe in the ideal, though they don't often see the ideal lived up to," Daly says.

McCann's resume includes work in poverty-stricken areas of Los Angeles, Sudan, Kosovo and Calcutta. In his clarifying statement about the video, McCann said he'd been careless in some of his remarks, including his "White baby" comment. But McCann didn't back down from his central message. It wasn't enough just to not have hatred toward minorities — you needed to actually fight it.

"Though I meant the video to begin healing rifts within our community," McCann writes, "it resulted in some people becoming further entrenched in their positions." ♦